From Meat Plant to "The" Plant: The Curious Future of Sustainable Food Production in Chicago’s Meatpacking District 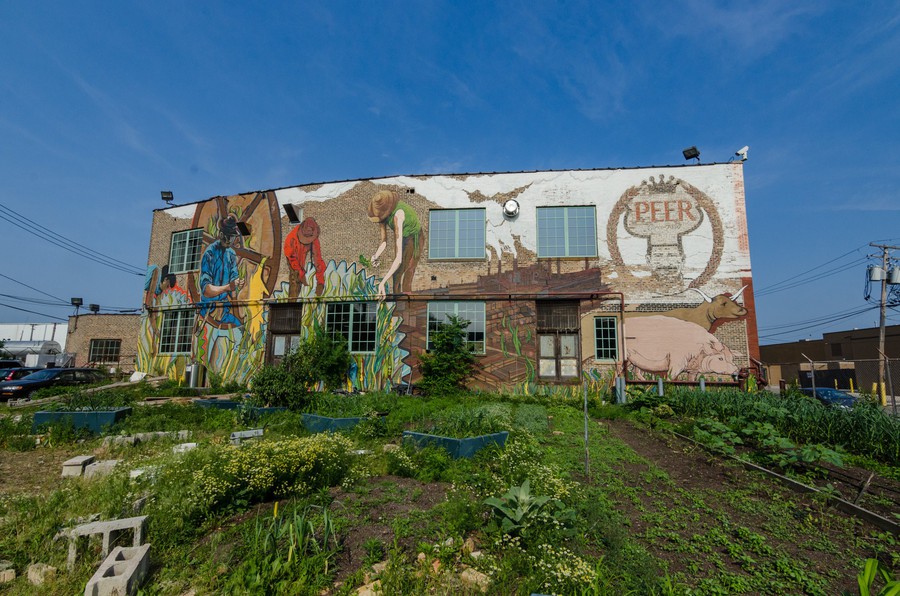 The Plant was born out of an old warehouse in Back of the Yards.

By Brianna Zeng   and Nicole Li

Rusted metal and century-old brickwork—the faded exterior of an old meatpacking facility contrasts with the cutting-edge biotechnology now within it. Welcome to The Plant, a research and production center comprising a collaborative community of small businesses. Located in the Back of the Yards neighborhood of Chicago’s West Side, The Plant is a feat of urban community planning and a vision of what sustainable food and waste management can look like.

In a district where public health has for years been threatened due to pollution and industrial factories, The Plant’s mission of developing waste-efficient food production through biotech research is (no pun intended) a breath of fresh air. In 2006, the meatpacking company that originally occupied the building, Peer Foods, relocated after decades of use, leaving behind the building with many of its facilities still intact. Four years later, the building was acquired by Bubbly Dynamics, a social enterprise dedicated to responsible urban development. Thus, the meatpacking plant became The Plant, and began its second life. As part of Open House Chicago, a weekend-long celebration of significant historical and architectural sites in the city, The Plant opened its doors—and rich history—to the public.

An eye-catching mural decorating the facility’s outside walls shows The Plant’s role in Chicago’s historical meatpacking district and its ironic renovation into a “vegan paradise.” Created by University of Chicago alum Joe Miller (M.F.A. ’08), the building-sized artwork preserves the original Peer Foods logo in its top-right corner. At its center stands a silhouette of factory chimneys emitting clouds of smoke into the air—an image not unfamiliar to the Back of the Yards community, which is home to multiple manufacturing plants and located adjacent to Chicago’s historical Union Stock Yards district.

The smoke appears along the right side of the mural, filling in almost the entire space behind the Peer Foods logo and an image of a hog and a cow. To the left, the smoke thins out to what appear to be rain clouds over a group of laboring farmers and vibrant vegetables and plants lining the bottom of the wall. The smoke and the juxtaposition of the colorful left side with the faded, dully colored logo on the right make a powerful statement: In moving away from industrialized meat production and toward sustainable agriculture, we can reduce emissions and move toward a healthier future.

The facility pays further tribute to its history inside. The Packingtown Museum located on the second floor illuminates the industrial past of the neighborhood and facility through unique photography. The photographs show everything from the beginnings of the Union Stock Yards to the muckrakers of Chicago to the meatpacking processes used in the factory. One set of images depicts the entire “hog process,” a 25-minute procedure beginning with the driving of the animals from their sales pens to the kill floors and ending in the final cutting and packaging of meat. The photos omit little: A worker inspecting a row of sliced-open pig carcasses is pictured in one, and in another, two live pigs dangle from hooks on their way to the slaughterhouse, with the caption “Wheel of Fortune Hoisting Live Hogs into Killing Pens.” The snapshots are not for the squeamish or faint-hearted—they do not attempt to disguise the thankless jobs and oft-gruesome processes taking place in meatpacking facilities. Instead, they acknowledge and educate the public about The Plant’s history as well as its role in the organization’s transformation.

Other parts of The Plant celebrate the neighborhood’s future. The Sustainable Food Innovation Lab (FI-Lab) on the third floor, for example, is labeled as a “cutting-edge food and bioreactor laboratory,” conducting research on innovative foods like alternative proteins and plant and cell-based products as well as ways to upscale their production. Nearby, an incubator kitchen project is in the works, planned for all-purpose use after its completion. The space will contain a shared walk-in cooler and freezer; kitchen basics, such as three-basin sinks; reach-in coolers; and prep tables, and it will be able to accommodate a variety of products. Outside the facility stands a “Love Fridge”—a fridge designed to provide free food to anyone who may walk by—based solely on goodwill and trust in strangers. Other projects such as the Mechanical Greenhouse and Algae Science Lab possess similarly futuristic-sounding names and purposes.

What’s common to all these initiatives is a deep sense of hope and community. The Plant’s intentions are clear: With many projects financed by organizations, such as Chicago’s Neighborhood Opportunity Funds, for the benefit of all community members, the facility seems determined to leave no one behind. In fact, as a community-centered organization, The Plant received a more than $1,600,000 grant from the City of Chicago this past July in order to expand its facilities and support the local businesses within it.

Currently, The Plant is home to more than twenty small businesses, including Whiner Beer Co., the resident taproom and brewhouse, and Turtle Stop, which sells a variety of unique, sustainable products produced by Bubbly Dynamics, including ARIZE Kombucha, vegan gelato from Sacred Serve, cheese from The Great American Cheese Collection, and honey from urban beekeeping project Bike a Bee. In addition, The Plant operated a pop-up vegan farmer’s market Vegan Paradise in collaboration with the Chicago Vegan Test Kitchen throughout the month of October. The organization hosts a variety of market events throughout the year, where The Plant’s member businesses are often highlighted.

Even if you’re not vegan, consider stopping by The Plant—it’s more than just a farmer’s market for hipsters. Something special is to be found in its mission and what similar initiatives could mean for food business in communities with industrial pasts. The same bricks that once supported a historically unsustainable industry now embody the opposite. The Plant has become a leader in environmentally mindful food production and eco-friendly living. So take a leaf of faith—The Plant shows what’s possible when we invest in change and prioritize the growth of local businesses.