A number of minority students participate in multicultural Greek life. 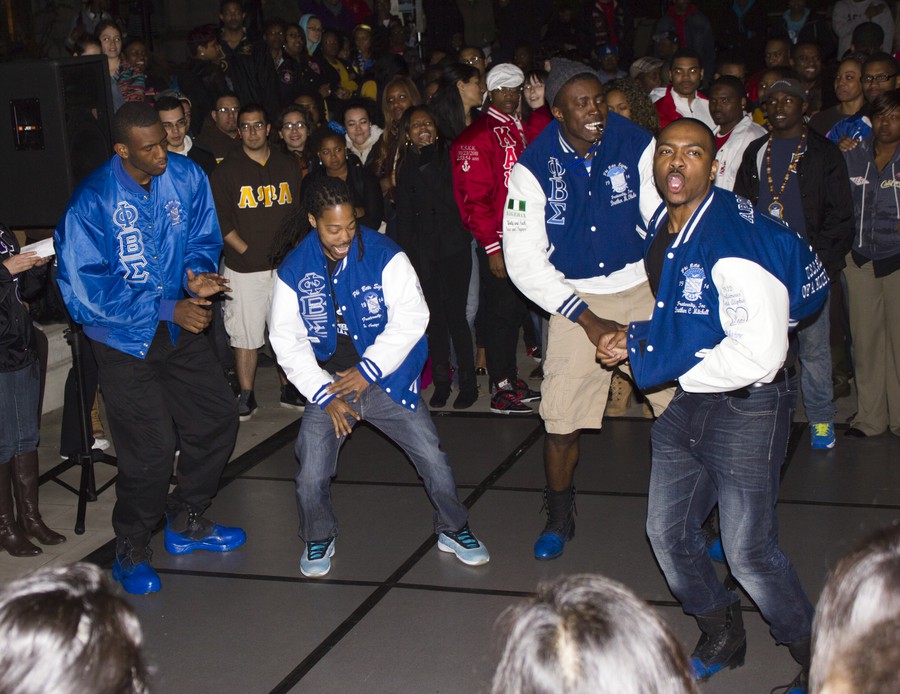 They stepped, they strolled, they saluted: The brothers and sisters of various multicultural Greek fraternities and sororities, the vast majority of whom are of African American, Asian, and Latino descent, gathered on Thursday night in Hutchinson Commons Courtyard for the third annual Multicultural Greek Showcase. Performers included not only U of C students from these organizations, but members from University of Illinois at Chicago fraternities as well. Students from other Chicago universities cheered in the audience.

“It might take you a few minutes to understand what’s going on,” fourth-year Karla Martinez said to me before the show, referring to the step routines and chants that students would soon perform. Martinez, a sister of Lambda Theta Alpha (LTA), a Latina-interest sorority, has been president of the Multicultural Greek Council for two years. There are currently eight on-campus organizations affiliated with the council, and many University of Chicago students are also involved with city chapters of multicultural sororities or fraternities.

“We wanted to become something more serious and solidified. We’re always looking to become better known on campus,” Martinez said. As president, she helped draft a constitution for the council. Through her involvement, multicultural Greek life on campus has grown. She schedules meetings and helps to plan three events every quarter—activities like fundraisers, study breaks, movie nights, community service projects, and guest speakers.

The Showcase, however, is her favorite.  She explained, “This event shows everybody’s pride in their organization. It’s a way of showing ‘your colors’ or ‘your organization’ to everyone, and also just a way to come out and say ‘hello’ to each other. It’s a very interactive performance.”

The event started with “Roll Call,” during which all 11 participating organizations acknowledged their presence with cheering, chanting, and whistling. The audience of more than 100 formed a circle around the first performers. The show began.

“That’s the Way I Like It” blared over the speakers, and the brothers of Lambda Upsilon Lambda, a Latino-interest fraternity, began to “stroll,” or perform a dance routine. The dance was evidently well-rehearsed. Next up was the University of Illinois at Chicago’s Kappa Pi Beta, an Asian-interest fraternity. After strolling, the group performed an impressive step routine—a form of percussive dance in which one’s entire body is used as an instrument. During the entire performance, the men stayed in a circular formation, rotating with each move. Later on, three sisters of Lambda Theta Alpha performed their sorority salute, which emphasized “community, love, and respect.”

Most performances began with a two- or three-minute long stroll, followed by a two- or three-minute long step dance, ending with the salute, which could last anywhere from 30 seconds to four minutes. It wasn’t uncommon for these chants to include lines like “We are the best,” and many of them retold the organization’s history. The sisters of Alpha Kappa Alpha, the oldest Greek-lettered organization established by African-American college-educated women, even included a skit within their salute.

“This is one of the reasons I decided to come [to the University of Chicago],” first-year student Elias Mechaber said. He attended the event last year during a prospective students weekend and enjoyed the enthusiasm and creativity of the performances.

He was not disappointed this year—the well-rehearsed performances emanated energy and excitement, revealing the closeness of the sorority sisters and fraternity brothers. The synchronization of each step seemed to mirror these tight bonds.

Second-year Matthew Lee, a brother of Lambda Phi Epsilon (an Asian-interest fraternity) and the Vice President of External Relations for the Multicultural Greek Council, spoke about the strong bonds within his fraternity, which caused him to join in autumn 2010. “I just felt a sense of closeness. The brothers reached out to me originally and invited me to events. I felt welcomed,” he said.

Not only does Lee feel a connection with the brothers of the University of Chicago chapter of Lambda, but his activity in the organization has opened the doors to other relationships nationwide.

“Every spring and Thanksgiving break, the brothers of Lambda go on a road trip and stay at many different Lambda chapter houses along the way.”

Martinez also explained her decision to join a sorority on campus, “I knew I wanted to join a sorority coming here; it was just a matter of which one. Finding LTA, the shoe fit. We shared ambitions, interests, and a lot of the same struggles of being a person of color on campus.”

During the performances, students cheered for one other, regardless of their affiliation. Fourth-year Diamon Lockett, a sister of Alpha Kappa Alpha, an African-American sorority, enjoyed the Showcase because she had the opportunity to learn about the different cultures and histories of other organizations. “The Greeks are very supportive of each other,” she said. She performed in the first Showcase in 2010.

The event ended with both audience members and performers crowding the dance floor to celebrate the end of an evening full of excitement, pride, and an increased understanding of each other.