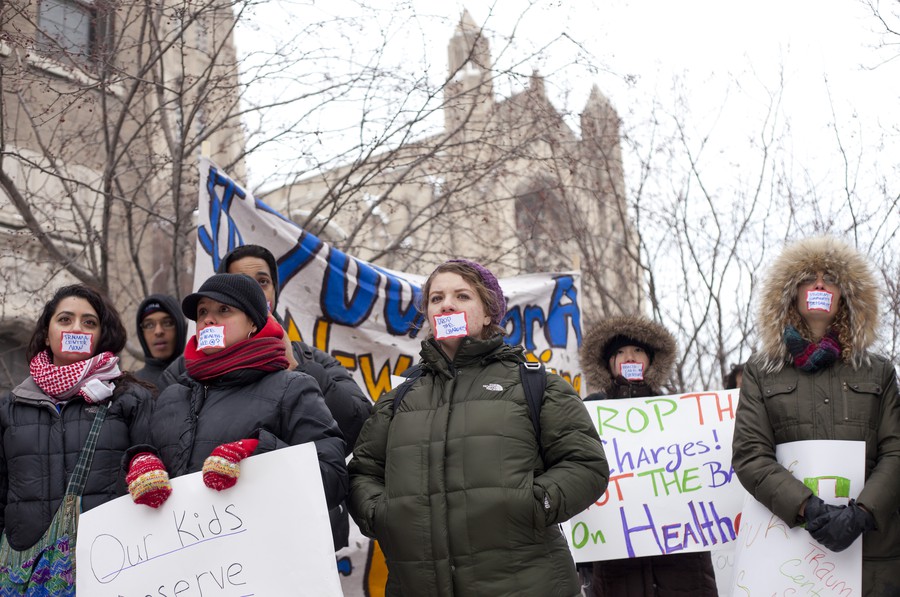 In response to the opening of the $700 million Center for Care and Discovery (CCD) on Saturday, Fearless Leading by the Youth (FLY) and Students for Health Equity (SHE) held a march in protest of the University’s refusal to re-establish a level-one adult trauma care center as part of their ongoing campaign. The demonstration was the groups’ second protest at the site of the new hospital.

On Wednesday, an e-mail from Kenneth Polonsky, executive vice president for medical affairs and dean of the Division of Biological Sciences, asked people to stay away from the hospital to facilitate a smooth transfer of patients to the new facility. UCMC spokeswoman Lorna Wong said the e-mail was not intended as a response to the January 27 protests.

Marlon Lynch, chief of UCPD, Eleanor Daugherty, assistant VP for student life, and an administrator from UCMC met on Monday with third-years Patrick Dexter and Michael McCown from SHE and Molly Cunningham, a graduate student in the anthropology department, to ensure that the demonstration would abide by restrictions including temporary noise ordinances and roadblocks.

FLY and SHE held a brief press conference in front of the CCD before marching to President Zimmer’s home at 59th Street and University Avenue. There, demonstrators presented enlarged print-outs of two petitions that demanded that the charges against the protesters who were arrested during the January 27 UCMC demonstration be dropped and that the UCMC expand access to trauma care on the South Side. According to Jim Wessel, one of three Deans-on-Call at the protest, Zimmer was not at home.

During the press conference, Veronica Moore, a member of FLY, urged the University to consider its location with respect to the high proportion of gun violence in the surrounding communities.

Chants of “We’ll be back” at Zimmer’s home as the demonstration was winding down sent a second message: The community and student organizations have no intention of stopping the campaign.

“The highest figure they ever quoted for what a trauma center would cost to operate is $15 million a year, which is a lot of money, but it pales in comparison to the scale of the building that they just opened.”

The march, which began at the corner of 60th Street and Cottage Grove Avenue, was punctuated by a variety of slogans that have become associated with the trauma center campaign.

Wessel received the petitions and was ordered to deliver them to Karen Warren-Coleman, VP of Campus and Student Life, later that afternoon. Wessel said he did not know when the petitions would reach Zimmer.

The peaceful nature of the march stands in sharp contrast to the events of Jan. 27, the last trauma center demonstration, during which Toussaint Losier, an eighth-year graduate student in the history department;  Alex Goldenberg (A.B. ‘06), an organizer for FLY; Jacob Klippenstein; and a minor were arrested. According to both University administrators and the organizers of the protest, that was no accident.

“What we did today was exactly what we intended to do. We didn’t have anything up our sleeves. We didn’t at all want to recreate what happened a few weeks ago,” Dexter said.

Lynch and Daugherty told the students that there would be three deans-on-call during the demonstration.

“At this point I still don’t know what a dean-on-call does,” Dexter said regarding both the meeting and lack of clarification regarding what the “resources” and “support” a dean-on-call is obligated to provide mean.

The University is currently reviewing the incident, and has declined to comment on the events of Jan. 27 in regards to the timeline of the dean-on-call’s actions. Losier, who as a graduate student is privileged to the services the deans-on-call provide, was never able to speak to a dean-on-call prior to or during his arrest.

Virginia Parks, professor at the School of Social Service Administration and member of the faculty council of the University senate, collaborated with faculty members in several disciplines to create a petition aimed at demonstrating faculty support for the three protesters arrested. Parks presented a draft of the petition to faculty on Saturday and expects to give the petition to administrators today as a last effort to get the University to drop charges.