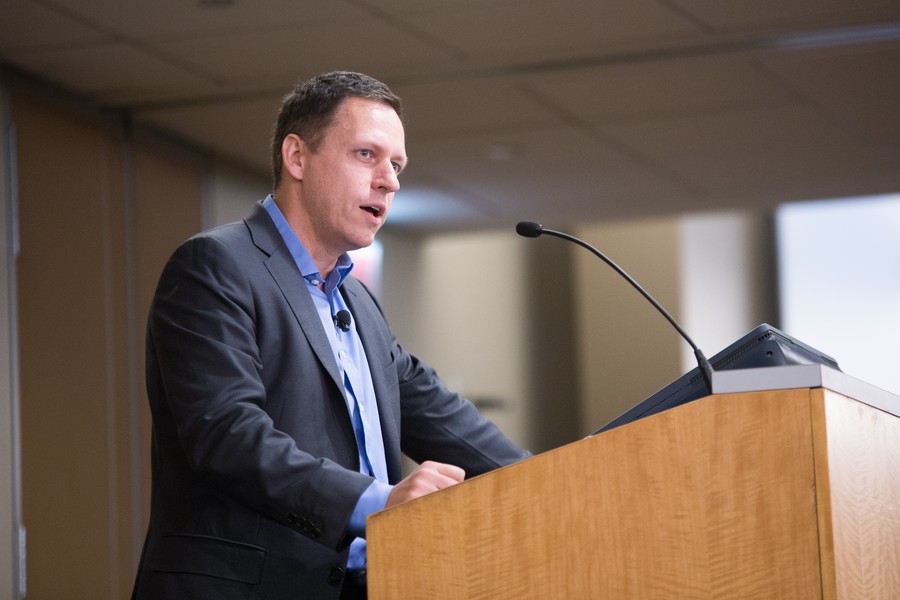 More than 1,000 members of the University community congregated at the Polsky Center at the Chicago Booth School of Business to hear Peter Thiel speak about the future of entrepreneurship, Bitcoin, and business practices Wednesday evening.

Thiel, a German-American entrepreneur, is best known as the co-founder of PayPal and the benefactor behind the Thiel Fellowship, which provides 20 people under the age of 20 with a $100,000 stipend to pursue an entrepreneurial venture each year. The talk was hosted by Booth’s Norman R. Bobins Professor of Economics Randy Kroszner.

Thiel began the talk by criticizing what he calls as a pervasive, pessimistic worldview that there are very few fields in the modern world in which discovery that leads to entrepreneurial success can be made.

“Basic geography and chemistry are two examples of areas in which there is nothing left to discover, but most fields are not like that. However, if we believe that there are no ‘secrets,’ we’re never going to find out,” he said.

He elaborated that there is always more to discover, even if it is more difficult. “There is a common belief that all of the low-hanging fruit has been picked. I’m telling you that it has always been intermediate-hanging fruit, and it is up to us to find it and pick it,” he added.

Thiel followed with the provocative suggestion that aspiring entrepreneurs who uncover a “secret” and desire fortune should seek to establish a business monopoly.

“I think that capitalism and competition are antonyms—‘capitalism’ being defined as a system which results in the accumulation of capital. Go for the monopoly. All happy companies are different. All unhappy companies are essentially the same as their competitors,” he said, parodying Tolstoy.

Kroszner asked Thiel to elaborate, as “most University of Chicago students are taught that pure competition is capitalism.”

Thiel qualified his statement by saying that monopolies should be considered to be “bad” when they artificially reduce the supply of a particular good; Thiel cited the Apple iPhone and PayPal as two instances in which monopoly did not reduce supply. Thiel also said that the existence of U.S. patent and copyright laws are evidence that innovation can be rewarded with monopoly, with benefit accruing to both the inventor and the public.

“When Apple released the iPhone, there was no reduction in the supply of smartphones, because it was the first one,” Thiel said. “With PayPal, which was built on the idea of combining cryptography and currency, we were the first to come up with a product among maybe 200 people in the world who were working on the idea.”

Over the course of describing his vision of good business practices, Thiel suggested that once an entrepreneur has uncovered a “secret,” finding a good name for the enterprise is nearly as important as the idea behind the business.

“Look at Napster, the music [sharing] company. What are you napping? You nap music, you nap the kid. That one got sued. Or the difference between MySpace and Facebook. MySpace is narcissistic self-expression; Facebook is about learning about other people around you,” Thiel said.

Thiel also addressed the subject of Bitcoin, which is a digital encrypted currency. Thiel characterized Bitcoin as a product which was founded on the same set of ideas as PayPal, but which was developed in an entirely different direction.

In the Q&A section of the event, Thiel responded to an inquiry concerning his opinion of his alleged archetype in the HBO series Silicon Valley.

“I would never drive a car as small as that. Also, if there was a toga party at the office, people would get really nervous about that, too.”