BLACKLIGHTxMAROON: Give the people what they want

Online social activism creates a culture in which activists say exactly what their followers want to hear in order to gain fame. 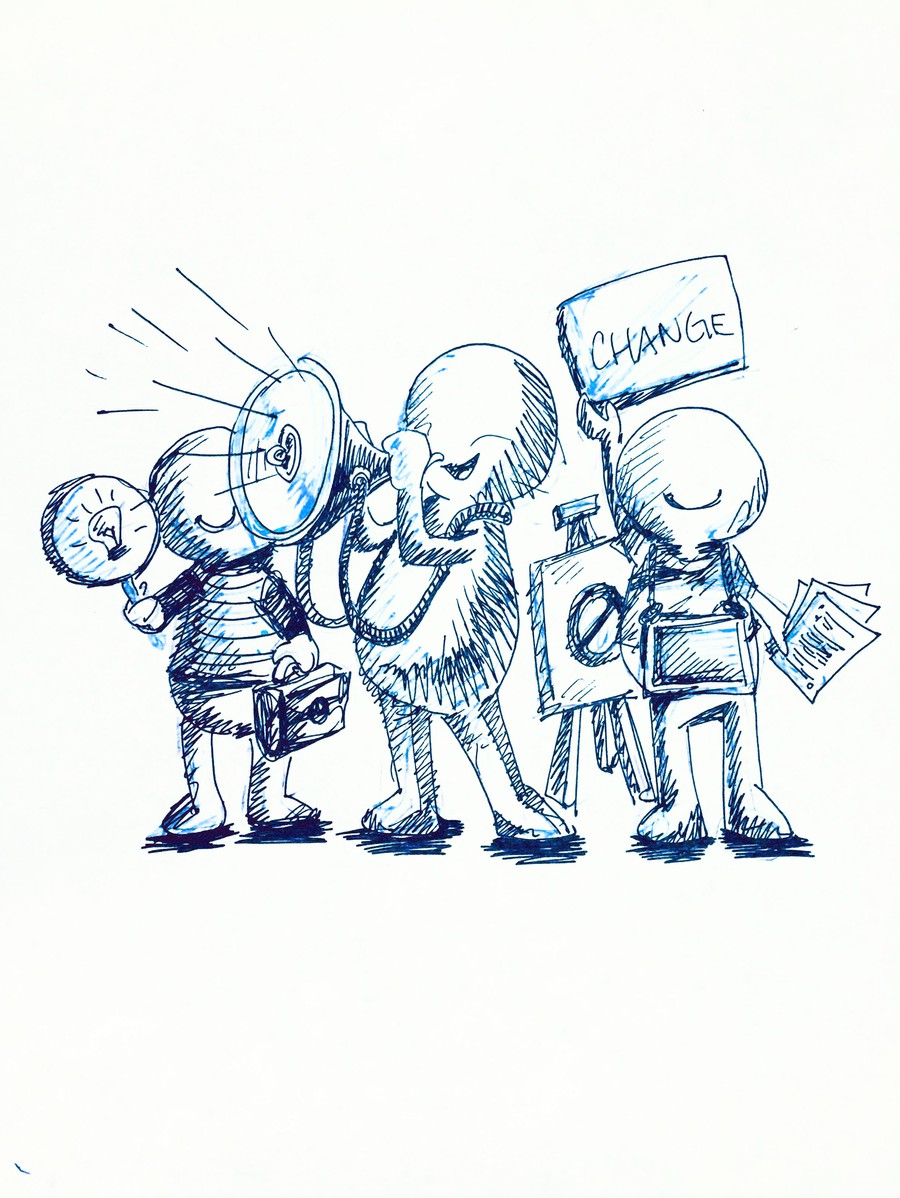 There are two shared beliefs that exist within most activist circles—both on and off campus—regardless of our respective causes or the specific goals we’re focused on: One, “we’re all in this together,” and two, “we’re all in this for the right reasons.” Increased discourse and writings centered around the importance of intersectionality (ways in which different social issues influence each other and intersect within broader social structures)  have rendered the first unspoken sentiment readily observable these days. Even on our own campus, activist RSOs from across various spectrums of the social justice movement  have begun to frequently team up with each other to host mutual events and panelist-style discussions.

However, the latter assumption has begun to be regularly called into question, at first by the historically critical (and often conservative) voices outside of these communities, and now, more surprisingly, from voices within these movements like myself, who have found themselves either frustrated or disillusioned with the nature of on-campus activism and social justice movements overall.

As a society, we laud certain figures like Martin Luther King, Jr. and Harvey Milk primarily for their dedication and service to each of the civil movements they were at the forefront of, noting their longstanding legacies and commendable reputations as the fitting results—not the sole aim—of their lives’ works. Certainly the way we think of these people—as historical figures and cultural paragons of a certain humanitarian aspiration—echoes the idea that, when it comes to social justice overall, the best leaders are the ones who manage to achieve the highest level of influence for all the right reasons. Chiefly, the supposed betterment of The People (that nameless mass of oppressed individuals whose characteristics may vary depending on the vision of the person invoking their image) or, more loftily, The World. Right.

But what if MLK or Milk had been around in today’s age of cult-like social media presences and their internet “followers?” Would we have been more suspicious of their intentions or more critical of their charismatic tendencies then? We don’t need to be skeptical of the individuals who reach celebrity status for their activism but we—regardless of our feelings about Social Justice Warriors (SJWs) overall—should all be skeptical of the kind of culture that encourages celebrity or fame as its own end and the potential implications of that culture among the backdrop of our current sociopolitical movements. Beyond this skepticism we, as activists, need to be more critical of our own actions and motivations to make sure that they are truly in line with what we say we stand for, and not merely for what we want others to believe we do.

We currently live in a society where more often than not, people follow ideas because of individuals, not the other way around—that is, individuals because of ideas. More than ever, the type of public persona a person is capable of crafting is more important than the actual content of their message. Many people frequently express the same opinions  about contemporary social justice issues (e.g. incidences of police brutality, racial discrimination, or perceived failures in governmental policy); but the public judges the statements of people with larger followings on social media outlets like Facebook and Twitter as somehow having more validity or value than the voices of others. While a person’s greater societal influence can definitely be evaluated based on their social media following, the nature of that influence as either positive or negative is more difficult to determine. Supposedly, if we are to deem raising awareness as one of the chief responsibilities of social activists in today’s age, then certainly each retweet, reblog, and like has the potential to go a very long way in terms of increasing the visibility of certain social issues and ideological beliefs.

…Unless our social media circles are not as ideologically, politically, or socially diverse as we like to think they are.

Unless our internet-based personas are part of an ever-expanding vacuum of like-minded voices who already agree with the majority of our opinions before we even begin the laborious task of attempting to then distill them into politically-correct sound bites of 140 characters or less.

Unless we’re also in the midst of a so-called “call-out culture” where opportunistic screenshots can wholly misconstrue or misrepresent the nature of our true beliefs in a sensationalist wave of excessive media coverage and echo chamber think pieces.

Unless the visibility we’re aiming for leads to greater misunderstandings and divisiveness both within our affected communities and within the larger communities where our voices find opposition.

When the focus of our social efforts begins and ends with “raising awareness” through social media, we can’t help but become sucked into the general “me” or ego-based nature of internet politics in general. The internet has helped to create a space for many to find solidarity and community where there might not have  been any before, but it has also become a place where we can literally transform ourselves into different people overnight and the nature of identity is simultaneously transient and political. It’s all about “my” page, “my” online community, and “my” followers—while things like “our” cause, “our” struggle, or “our” progress take on a more rhetorical significance for when we want to engage more people in our individual expressions.

In this type of egocentric cultural climate, it can be easy for activists to completely lose perspective or become entirely disheartened with our bigger, overarching ideals when someone makes a nasty comment anonymously on places like Yik Yak, or when someone points out something “problematic” on a particular online status or post of ours. With the nature of interactions today being so public and all of us having some obsession with the way others perceive these invented internet personas ours, everything becomes that much more personal—that much more “targeted.” As social activists, however, it’s our role to do our best to stay above the fray and keep our focus on the communities we serve and the larger issues at play. When we get too caught up in the reblogs, retweets, and ‘likes’ not only do we set ourselves up to be more sensitive towards things that can be perceived as ‘personal attacks’—we risk the content of our messages being overshadowed by the perception that people have of us as individuals who happen to be outspoken about these matters.

After the faux-hacking debacle of last quarter, I had time to reflect upon my role as a self-identifying social activist on campus, as well as on my relationships with many of the individuals who had been by my side, spearheading certain social justice initiatives and groups such as S.A.C.R.E.D - Students Against on-Campus Racial and Ethnic Discrimination.  I saw first hand the ways in which social media, perceived public personas, and differing egos can combine and result in less than desirable outcomes for all parties involved—especially when it comes to bringing about necessary change in challenging environments, regardless of how well meaning the majority of the main actors are.

One positive thing to come out of that situation, however, was that it did spark some much-needed dialogue within our community about on-campus activism in general, and some of the pitfalls we face in attempting to navigate these issues in light of changing technologies and evolving cultural priorities. More than ever, perhaps, it’s time to separate the dominance of ego from our activism and realign ourselves with the core issues at stake. Let’s set aside this focus on individual personas and reputations, in order to develop a renewed dedication to the things that really matter: like more universally equitable policies and increased resources for the marginalized and historically oppressed in our communities. No matter your thoughts on the people who purport to represent these groups publicly, it is the nature of the causes themselves—not the prominent individuals—that actually matters. Taking the ego out of movements aimed at social justice is about bringing clarity to the causes themselves and shifting the nature of the dialogue from the inevitable shortcomings of select individuals toward the specific issues and concerns their actions may address. It’s about transcending so-called identity politics and arriving at a place of universal solidarity and compassion for all. It’s about moving away from the perceptive level of “you” or “me” and bringing back the full concept of “we”. As self-identifying social activists, we must be sure that our intentions as well as our actions are always in line with our ideals and our values—meaning not from a place of desiring more recognition, fame, power, or any other self-serving concern. Only in truly practicing what we preach can we maintain authenticity and clarity amidst unexpected tragedies and events. Only in letting go of our individual concerns and prejudices can we attain the highest level of progress for the benefit of all society.

Nina Katemauswa is a third-year in the College majoring in philosophy and political science.