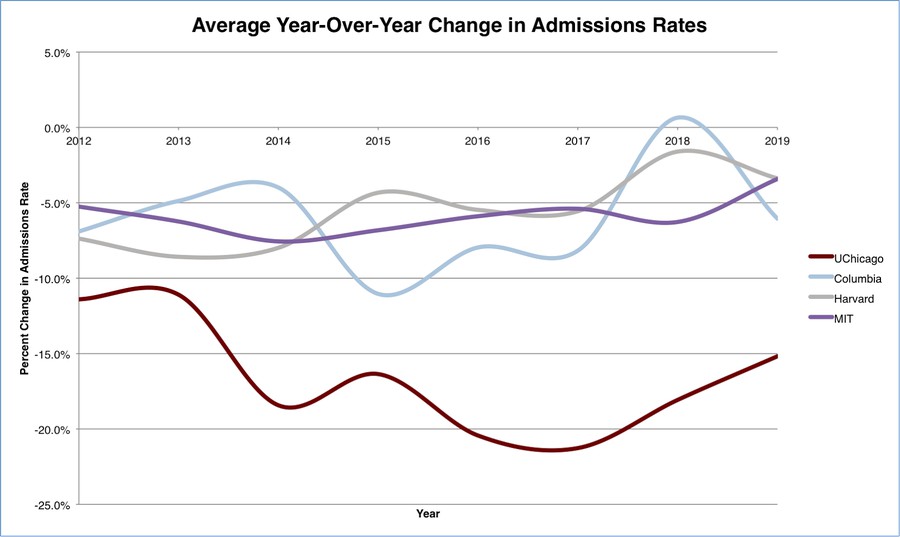 University of Chicago's admissions rate has dipped at a much faster rate than peer institutions. Each point in the graph displays the average percent change over an interval of three years.

This year, undergraduate acceptance rates have dropped from 8.4 percent to a record low, with only 7.8 percent of applicants admitted to the Class of 2019.

The College received 30,162 applications for the incoming class and extended 2,356 offers of admission. The decline in this year’s acceptance rate continues the trend of increased selectivity in applications to UChicago, as well as many other comparable institutions.

The lower acceptance rate marks the 10th consecutive year of a decline in admission rates, beginning with a 40.3% admission rate for the 2005. Application numbers have also jumped from roughly 9,100 applicants for the Class of 2009, marking a 331% increase in the past ten years.

The College also saw almost a 10% increase in applications this year, as compared to the previous year with 27,499 applicants. However, the admission cycle for the Class of 2017 still boasts the highest applicant number, with 30,369 applications received through the Early Action and Regular Decision cycles.

The University cites other major developments as a part of the recent success in attracting applicants, from the new Institute of Molecular Engineering to the Logan Center for the Arts. According to Chicago Magazine, the University “embarked on a $1.5 billion spending spree” in recent years as part of efforts to build the new arts and engineering centers, among other new buildings.

University spokesperson Jeremy Manier credits a large portion of the University’s successes to recently implemented financial aid initiatives. “We believe some of the increase in applicants was influenced by this year’s announcement of the No Barriers initiative and the complementary programs of UChicago Promise and the Odyssey Scholarships,” he said. “For example, the College is on track to increase the proportion of students who are eligible for Pell grants, which suggests that more outstanding students from families with low to moderate incomes are applying.”

Through these various initiatives, the College has secured one of the highest ranks in the U.S. News & World Report Best College Rankings, tying for fourth place with both Columbia and Stanford and surpassed only by Harvard, Princeton, and Yale.

Another cause of the declining admission rate stems from recent increases in yield to the College, or the number of students who choose to accept their offers of admission. “[The yield rate] is expected to be similar to last year – around 60 percent. Between 2009 and 2014, the yield rate increased by about 20 points,” said Manier. “It’s one more indication that students admitted to the College are enthusiastic about attending UChicago.”

Admitted students will have until May 1st to accept enrollment in the College.

By Emily Kramer and Pete Grieve

Many schools release their numbers around this time. UChicago did last year.