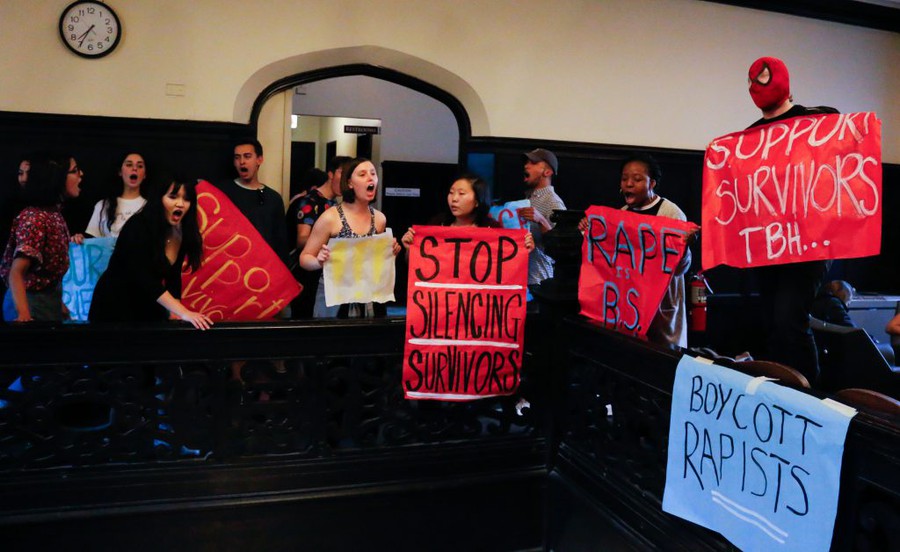 In May, students staged a protest in the Reynolds Club outside the opening night performance of a TAPS-sponsored play that was directed by the plaintiff.

By Anne Nazzaro    and Adam Thorp

A male student twice investigated for sexual assault by the University of Chicago has sued the school, saying its handling of the complaints against him demonstrated a “gender-based, hostile environment against males.”

The student, identified in the lawsuit as “John Doe” from Somers, N.Y., claims the University failed to treat him fairly after a University disciplinary panel cleared him of a sexual assault charge in 2014. The suit also accuses a female student of defamation for publicly saying he assaulted her and others. The complaint was filed on August 24 in federal court in Chicago.

The case against the University states that, in its treatment of the plaintiff in the case, “UC was motivated by pro-female, anti-male bias that was, at least in part, adopted to refute criticism within the student body and public press that UC was turning a blind eye to female complaints of sexual assault.”

The suit is part of a recent trend of litigation by male students at American universities who claim to have been discriminated against in sexual assault investigations in violation of Title IX, a federal statute that prohibits sex discrimination at colleges and universities that receive federal funding. So far, these claims have generally failed, though last month a federal appeals court ruled in favor of a similar suit against Columbia University.

The suit involves two separate allegations of sexual assault against “John Doe” filed with the University as Title IX complaints. The first allegation, filed by a female student called “Jane Roe” in the lawsuit, was decided in “John Doe’s” favor in 2014. The second was filed this year by another female student, called “Jane Doe” in the lawsuit, over an alleged instance of sexual assault in 2013. “Jane Doe” is being sued, along with the University.

The student the suit refers to as “Jane Roe” said “John Doe” assaulted her in the spring of 2014. A College disciplinary hearing in May of that year “found that the preponderance of the evidence did not support [“Jane Roe’s”] allegation that [“John Doe”] sexually assaulted her,” according to a letter sent to the plaintiff by former assistant dean of students Kathleen Ford. The letter was included as an exhibit in the suit.

The suit alleges that “Jane Roe” told other people at the University of Chicago that “John Doe” had raped her and that she added his name to the “Hyde Park List,” a Tumblr page that listed students it said had committed sexual assault or harassment.

“Roe” is not a defendant in the lawsuit. Instead, the suit points to the University’s decision to remove the plaintiff from a physics lab with “Roe” after the case had been decided, and its failure to stop her from repeating her allegations, as examples of the University’s bias against him as a male student.

In May of this year, the plaintiff directed a TAPS-sponsored play called The Bald Soprano, according to an email released as an exhibit in the case. Before the play’s debut, flyers were posted on bulletin boards around campus urging people to boycott the show, and a protest was staged near the theater on the play’s opening night.

“For me, it’s about supporting survivors, boycotting events put on by perpetrators of sexual assault, and accountability in RSOs,” then second-year Emma Maltby, who participated in the protest, said when interviewed by The Maroon at the time.

At the protest, students held signs with slogans like “Support survivors, not perpetrators,” “Boycott rapists,” “Silence = violence,” and “Hold your friends accountable.” Some protesters also had tape over their mouths, with “Support survivors” written on the tape. 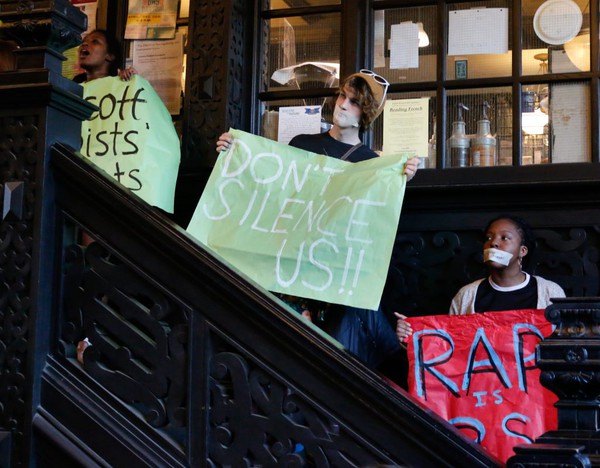 At the time, protesters would not speak to The Maroon on the record about whether their protest was related to a specific incident or person.

Before the protest, the female student called “Jane Doe” in the suit tweeted that the director of a TAPS show had assaulted her and other people on campus. The plaintiff’s law firm sent her a cease-and-desist order in June, demanding that she stop saying that “John Doe” had sexually assaulted her or other people, formally apologize to him, and issue an apology and retraction on social media. As of publication, the original tweet was still posted on “Jane Doe’s” Twitter account.

In May of this year, “John Doe” filed a Title IX complaint against “Jane Doe,” alleging harassment. Jeremy Inabinet, associate dean of students for disciplinary affairs, told him that the actions he cited did not constitute harassment under University policy and dismissed the allegation.

“Jane Doe” then filed a Title IX complaint in June against “John Doe,” saying he had sexually assaulted her in 2013. "John Doe" then filed another complaint with the school, saying that "Jane Doe’s" complaint was in bad faith and retaliation against his decision to file his May complaint and otherwise defend himself against rape allegations. The University initially told “John Doe” that it planned to pursue the case against him under the 2015 Student Manual, which had a different definition of consent from the 2013 Student Manual.

The suit says that “it was impossible for John Doe to know whether his consensual physical encounters with Jane Doe in 2013 might violate subsequently created stringent mandates in UC’s 2015 Manual.”

The suit also claims that the University failed to respond to public accusations that “John Doe” had sexually assaulted people and treated him unfairly by agreeing to hear “Jane Doe’s” Title IX complaint. The suit includes selected posts from the female defendant’s blog which it alleges show that their 2013 encounter was consensual.

The suit alleges that the female defendant’s comments were defamatory, and claims that she and the University inflicted emotional distress on the plaintiff. It alleges, among other things, that the University of Chicago violated Title IX by creating a hostile environment, selectively enforcing its provisions, and retaliating against “John Doe” for defending himself against allegations of sexual assault.

The case states that the University’s policy for Title IX investigations takes cues from the Department of Education’s “Dear Colleague” letter, which lays out how Title IX complaints about sexual violence or harassment between students should be handled by school administrations. It alleges that the letter defines females as the victims in Title IX cases and makes it difficult for male defendants to defend themselves in such investigations.

All of the parties in this case declined to comment, either personally or through their legal counsel or press representative.

An August 24 docket entry by the clerk of the district court noted that the University of Chicago had agreed to extend the amount of time the plaintiff had to respond to the defendant’s Title IX complaint, and to adjudicate that complaint under the definition of consent found in the 2013 Student Manual rather than the definition in the 2015 Student Manual. Judge Edmond Chang ruled that the case will continue to be conducted using pseudonyms for the plaintiff and female defendant, as the plaintiff requested.

The next hearing in the case is scheduled for September 14.

Editor’s Note: Based on information available in now-public court documents, it is possible to identify the parties in this lawsuit. The Maroon chose not to identify them because “John Doe” is a plaintiff in a defamation lawsuit, and reporting his name might further this alleged defamation, and because “Jane Doe” alleges that she is a victim of sexual assault, and The Maroon, like many media organizations, does not report the names of alleged victims of sexual assault without the victim’s permission in cases when the victim’s name is not widely known.

This article has been changed to clarify the number and nature of complaints with the University filed by "John Doe" against "Jane Doe." Two were filed: one in May of this year, and another in June.

Male student alleges anti-male bias by University in wake of sexual assault accusations against him.