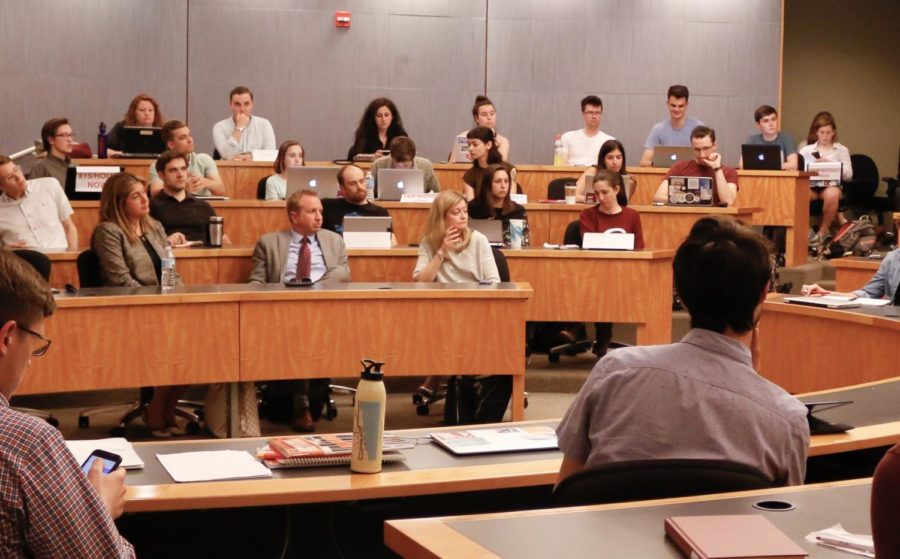 A student government meeting in 2018.

The Undergraduate Student Government (USG) Committee on Campus Sustainability (CCS) has planned a series of initiatives, slated for implementation in spring quarter, to reduce waste, promote sustainability education, and uphold environmental justice. CCS hopes to unite both the campus and surrounding South Side communities in sustainability initiatives.

“We’re hoping to expand on what we did last year to help people understand how their energy use has an impact beyond just themselves,” Hill said. While last year’s Battle of the Buildings was a collaboration between Facilities Services and Housing & Residence Life, CCS is planning to take over the initiative. Meanwhile, the committee is also looking beyond traditional energy and water waste. It has plans to promote electronic waste recycling on campus and is considering starting a petition to secure a faculty commitment to attend academic conferences virtually whenever possible to reduce emissions from flights.

CCS is also advocating a sustainability education curriculum to be incorporated into University programming during O-Week next fall. Students would learn about current sustainability initiatives on campus through presentations by both CCS and other student organizations like the Phoenix Sustainability Initiative (PSI), Phoenix Farms, and the UChicago Environmental Alliance (UCEA), an umbrella organization for campus environmental groups.

“It’s important to educate students about some of the things that are specific to Chicago,” Hill said. “The Chicago water system, for example, has a lot of unique traits, and so learning about why water reduction is important and why it’s best to limit your water usage when we have a lot of storms could be really beneficial.” Conserving water prior to and during rainstorms reduces the likelihood of sewage runoff overflows into the Chicago River.

Terra Baer, a fourth-year who is a member of CCS, the cofounder of UCEA, and the current vice president of PSI, highlighted that the committee is working on a number of other education initiatives.

“I’m working on a project about water literacy, putting up a poster series in different dorms, and kind of monitoring water usage as well,” Baer said. “So there are all these little things that are going on that we’re hoping to knit together in a broader thematic focus.”

Another CCS initiative includes a push for the University to construct more charging stations for electric vehicles across Hyde Park, an effort for which President Paul Alivisatos expressed support during the sustainability town hall last quarter. CCS hopes the charging stations will benefit students, faculty, and community members alike.

CCS is also aiming to partner with a South Side community garden to construct a new greenhouse.

“Environmental justice, for us, means expanding our sustainability so that it’s less of a ‘not in my backyard’ way of looking at things,” Hill said, referring to the tendency of residents to oppose proposed developments in their local neighborhoods. “We hope to involve the greater Hyde Park community and the South Side in our sustainable initiatives rather than just the campus area.”

In addition to its many initiatives, CCS hopes to leverage its unique position within USG to collaborate with University administrators on making policy changes that reduce greenhouse gas emissions.

have the same level of jurisdiction to do,” Baer said. “I’m hoping that we can continue working on these individual projects but also pivot our focus toward a greater emphasis on policymaking to support those individual projects and also the work of other environmentally related groups on campus.”

To that end, the sustainability committee is working alongside other members of USG and environmental student groups to produce both the University’s Greenhouse Gas Plan, which is set to be released this quarter, and the Water Conservation Plan, which will most likely be released in the spring.

Beyond its initiatives, CCS encourages all current undergraduate, graduate, and professional students to get involved with Green Fund, piloted in 2021 by Campus

and Student Life and UCEA. The Green Fund awards up to $50,000 in grants to student-led sustainability projects each application cycle and previously accepted applications for fall and winter quarter. Community members are encouraged to submit their own ideas for bolstering campus sustainability to the Fund. Examples of successful applications can be found on the Green Fund website.

“Trying to build connective tissue between our initiatives and the initiatives of other RSOs is definitely a focus as well,” Baer said. For example, CCS plans to work with PSI to cohost an “Earth Month” film festival on campus this spring.

Students looking to get involved in campus sustainability initiatives can learn more at the Office of Sustainability’s website.

Your donation will support the student journalists of University of Chicago. Your contribution will allow us to purchase equipment and cover our annual website hosting costs.

Thank you for your donation!