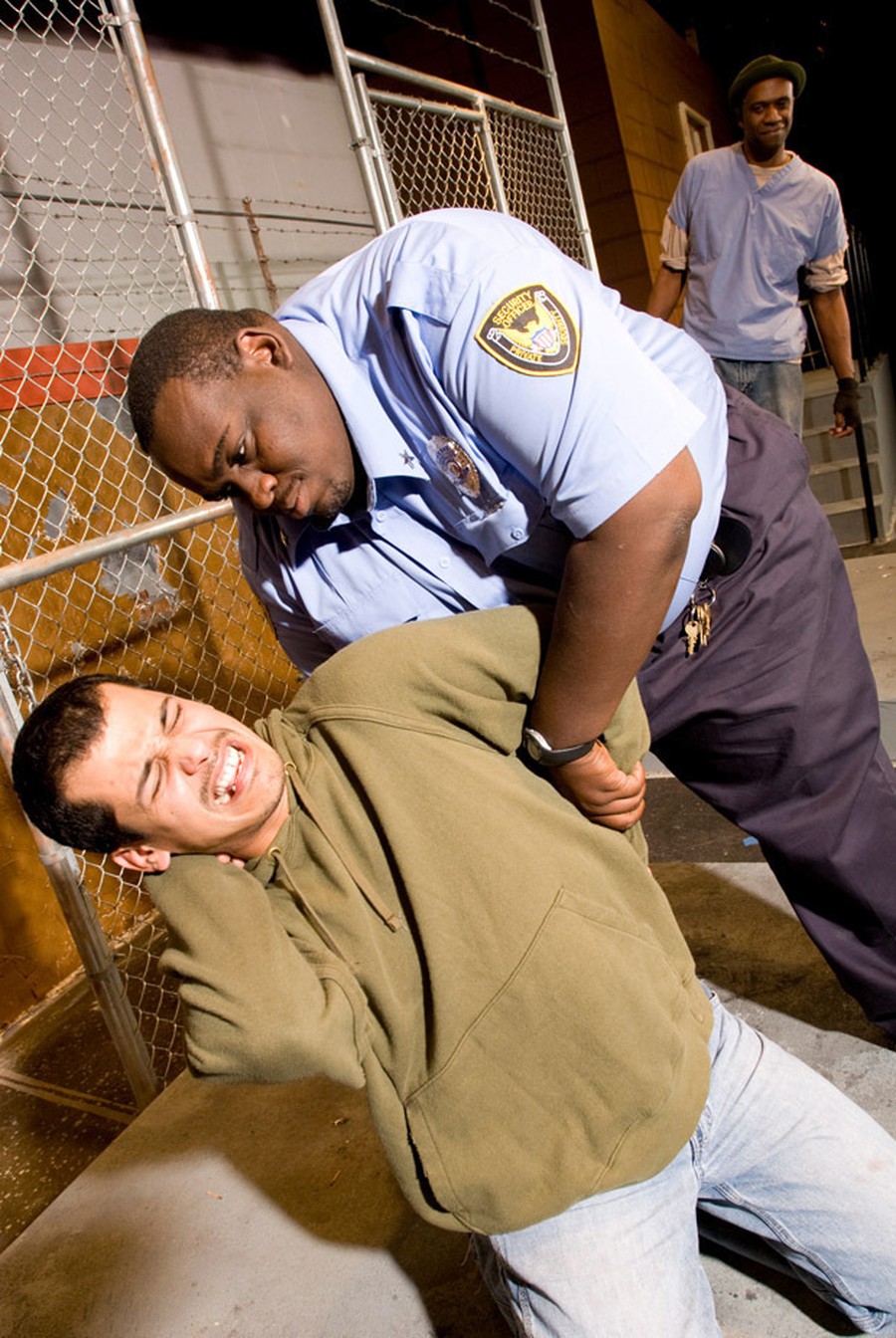 In the shadows of a prison cell, a hooded man kneels on the ground, trying to recite the Lord’s Prayer. But before he can even finish the second line, he is drowned out by a sea of obscenities from fellow inmates telling him to be quiet. He responds with his own stream of expletives, and soon the noise escalates to a deafening roar. A guard runs into the hooded man’s cell, and as his baton makes contact with the man’s skull, the lights fade out.

So begins Raven Theatre’s production of Jesus Hopped the ‘A’ Train, an urban drama by Stephen Adly Guirgis that confronts the issues of faith, justice, and morality in the American prison system. The play follows the story of Angel Cruz (Esteban Andres Cruz), a young Latino man who has been jailed for the attempted murder of a religious cult leader. While in prison, Angel befriends Lucius Jenkins (Bradford Stevens), a serial killer who claims to have since found God and turned his life around. In their daily allotted hour-long sessions in the prison yard, the two argue over their ideas of personal and religious ethics. Meanwhile, Angel’s public defender, Mary Jane Hanrahan (JoAnn Montemurro), is convinced that Angel’s actions were committed for valid ethical reasons and puts her career on the line to save him.

With such a premise and a slew of humorous lines, Jesus offers a fresh presentation of the debate on morality and does not shy away from confronting many fundamental issues head-on. Lucius, who admits to having murdered eight people in the past and never appears remorseful for it, is relentless in his belief that God’s forgiveness has righted his wrongs and made him a good person. Angel, on the other hand, claims not to know God and follows his own moral standard. After shooting to maim a cult leader responsible for the loss of his best friend, Angel initially believes he was acting out of righteousness. His belief in his innocence, however, is muddled when the victim dies in an operation several days after the shooting, and Angel is charged with murder. The situation is further complicated by Mary Jane, seeking to find the proper compromise between her own conscience and the technicalities of the judicial system.

In spite of its creative manner of posing and illuminating moral questions, however, Jesus unfortunately does not delve very deeply into the issues presented. Too often, the arguments that Lucius and Angel present in defense of their moral values are just different ways of phrasing the same points. At times, the arguments even sound like a series of separate monologues, with neither character seeming to engage the words of the other. The play also attempts to compromise the various moral standards by casting doubt on the characters’ beliefs, but this is executed with rather awkward timing near the end of the play and consequently ends up making the characters seem self-contradictory.

The writing of the play aside, Raven Theatre’s production is very well directed. The set is somewhat minimalist and contains only a few, dark colors, but this serves to emphasize the bleakness of the prison and the situation in which the characters find themselves.

The cast delivers a solid performance all around. Motemurro depicts Mary Jane’s ambitions and insecurities very clearly, and she effortlessly transitions between the callous and soft sides of her character. Cruz is perfect for the role of Angel, delivering a heartfelt performance that leaves you hoping for the best for him. The highlight of the play, however, is Stevens’s spectacular portrayal of the serial killer Lucius. With a strong presence on stage, Stevens is very convincing when he speaks as a born-again Christian, but when his smile disappears and he recounts the murders he committed in gruesome detail, his performance is enough to send a shudder down anyone’s spine.

Confrontational and unabashed in its tackling of controversial issues, Jesus Hopped the ‘A’ Train does not let the audience leave without developing some strong opinions toward it. While the play’s resolution to the various questions that it poses is not perfect, it brings together many issues that affect contemporary society and presents them in an entertaining and approachable way. One is forced to examine one’s own values in light of the characters’ situations, and perhaps that is the play’s most commendable achievement.