University Orchestra shows off its Lisztomania 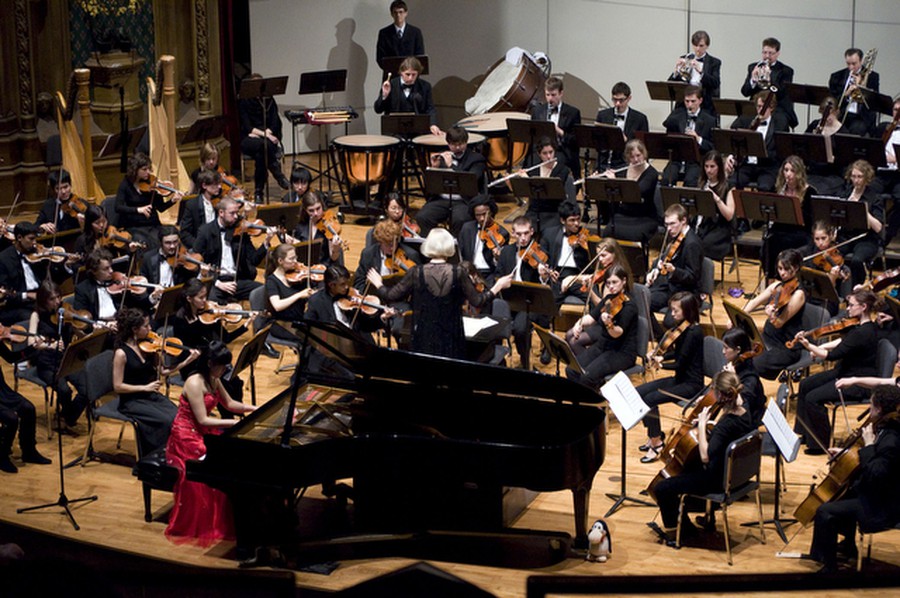 As the Chicago weather struggles to maintain consistency, the University Symphony Orchestra provided an aural preview on Saturday night of the warm climate most people desperately want. The concert, entitled “Liszt Into Spring!,” was a compilation of pieces by Hungarian composer Franz Liszt. The orchestra first played the two symphonic poems “Hamlet” and “Orpheus,” and closed the night with “Hungarian Rhapsody No. 2.” They were accompanied by highly accomplished pianist Alice Chen for Lizst’s “Piano Concerto No. 1.”

Conductor Barbara Schubert explained before the concert that part of the motivation behind the organization and selection of the pieces was to show that Liszt was an expert composer, as well as a piano virtuoso. Both his piano-playing and composing talents, she said, are emphasized in his longer pieces.

The night began with the two tone poems. From the pieces’ titles, it’s quite obvious what inspired them, but the two treat their extra-musical sources quite differently. “Hamlet” was first, and it was apparent (although the program pointed it out as well) that Liszt was exploring two highly distinct musical dispositions: one turbulent and frustrated, the other delicate and far calmer. It’s relatively easy to tell that the characters being alluded to are Hamlet and Ophelia, the vengeful prince and the tragically elegant noblewoman.

The orchestra’s performance highlighted the distinctness between the two parts of the tone poem. In fact, I felt that by observing from my spot in the upper tier of Mandel Hall, I could almost visually determine which character was being expressed according to which section of the orchestra was playing. “Ophelia” was almost strictly isolated to the flute and clarinet section, while “Hamlet’s” darker tones were fleshed out with the violins, cellos, and basses.

“Orpheus,” on the other hand, was much less dependent on a strict association between musical and character temperament. Instead, it gave a more fluid, impressionistic interpretation of the Orpheus legend. Beginning with the harps for which the mythological figure is famous, Orpheus’s role as a musician is examined by presenting several different musical themes that gradually transition into one another. The steadier pace and consistency throughout this piece made it my personal favorite of the night.

But Alice Chen’s performance was without a doubt the highlight of the evening, and was the one time when Ms. Schubert’s wish to de-emphasize Liszt’s extreme level of skill was temporarily set aside. Liszt’s piano concerto is extremely intense and swift, and can move in the space of seconds from rapid scale progressions to subdued chords and melodies. Chen, who is also a second-year Ph.D. student at the Booth School of Business, played beautifully throughout, and was able to make the piece flow continuously despite, the quick tone changes.

The final piece of the night was the second “Hungarian Rhapsody,” which is arguably Liszt’s most easily identifiable piece. Featured in everything from Looney Tunes cartoons to Marx Brothers movies, it was a pleasant realization to give a name to a piece I had heard so many times on television and in films. Because I had heard it before, it was less unpredictable than the other pieces, but it was still no less compelling to watch Ms. Schubert conduct the orchestra and successfully execute such an expansive and complex piece of music.

While there was certainly no lack of incredible skill at the piano in Chen’s performance, Schubert still achieved her objective for the night. The selected pieces were, on the whole, diverse, captivating, and presented what seemed to be a good overview of Liszt’s work.