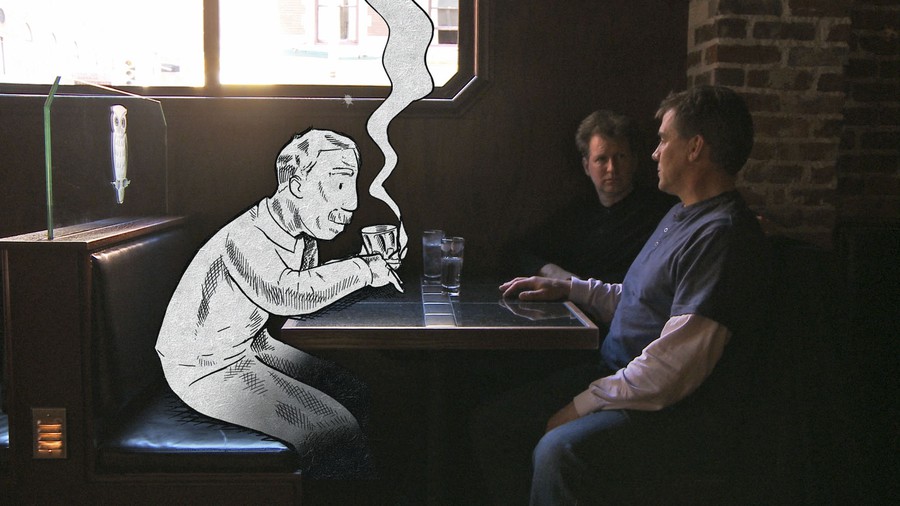 “‘Audio vérité’—A term used to describe real-life recordings, made surreptitiously. Found sounds and phone pranks.” So opens Matthew Bate’s new documentary Shut Up Little Man!: An Audio Misadventure, an Official Selection of the 2011 Sundance Film Festival. Bate’s film not only delivers on its promise of “found sounds,” but also offers insights into human truths both hilarious and alarming.

Shut Up Little Man! centers around the story of Mitchell D. and Eddie Lee Sausage, free-spirited friends who, after graduating from college in 1987, drive from Wisconsin to start new lives in San Francisco. They rent out a run-down apartment on Steiner Street, casually referred to as the “Peptol-Bismol Palace.” Three weeks after arriving, the pair overhears the first of countless raging arguments between Peter Haskett and Raymond Huffman, their neighbors in the adjacent apartment. They do not call the police, nor do they search for a new place live, but instead attach a microphone to the end of a ski pole, lean out of their apartment window, and record dozens of hours of their graphic arguing. Shut Up Little Man! chronicles the transformation of the recordings from mixtapes shared among friends to audio vérité that has achieved an underground cult following.

The hilarity of the recordings lies in the absurd dynamic between Peter and Ray; Peter is a flamboyant homosexual, and Raymond an angry and belligerent homophobe. The tapes are comprised largely of their drunken brawling, not limited to Raymond’s absolutely vile opinions on the gay lifestyle and Peter’s now famous retaliation of, “Oh, shut up, little man!”

The dialogue between Peter and Ray alone is enough for an entertaining film; yet just as the documentary shows the transformation of Mitch and Eddie from chain-smoking teenagers to salt-and-pepper-haired 40-somethings, so does Bate’s film grow in depth and maturity.

An important subplot follows the copyright status of the recorded material. Initially, Mitch and Eddie include a note with their mixtapes encouraging use of the material for artistic pursuits. Once one-act plays, comic strips, and other creations inspired by the tapes emerge, however, the pair wastes no time in copyrighting the material. It comes to light that numerous artistic projects and several friendships are destroyed over these recordings that, ironically enough, came to fruition as a result of violating the privacy of others.

Bates also utilizes the Shut Up Little Man! story to nostalgically track changes in media over the last 20 years. In the film, Eddie reflects that, “the initial spread of Shut Up, Little Man! all happened pre-digital, pre-Internet, and…essentially spread from a kind of obsessive, sub-terrain network of tape-traders.” The wide listenership of the tapes is all the more significant when compared to viral videos of today that may be viewed, shared, parodied, and responded to by millions within the span of hours.

The most compelling and poignant moments surface towards the end of the film when a new question arises: Should we be laughing at Peter and Raymond? Mitch and Eddie are able to track down two players from the early days of the Shut Up Little Man! recordings. The first, Tony, is a convict who lived intermittently in the apartment with Peter and Ray and made sporadic appearances in the recordings. When they finally convince Tony to allow the cameraman into his single-occupancy apartment, he is immediately revealed to be a sad, lonely character that suffers greatly from his relationship with Peter and Ray. The film also includes a brief interview with Peter, now a vacant old man, so isolated that he knows nothing of his own minor stardom. The viewer must question whether or not it is acceptable to make light of the clearly miserable lives of Raymond and Peter—tragic figures that inevitably exist a thousand times over behind closed doors. Shut Up Little Man! speaks volumes to our voyeuristic tendencies.

Bate’s film reveals the dark side of an apparently innocent sensation. The film manages to straddle hilarity and tragedy, considerately humanizing men that have perhaps too long remained remote caricatures. Shut Up Little Man! is an honest and charming film, remarkably unique compared to other documentaries in recent memory.