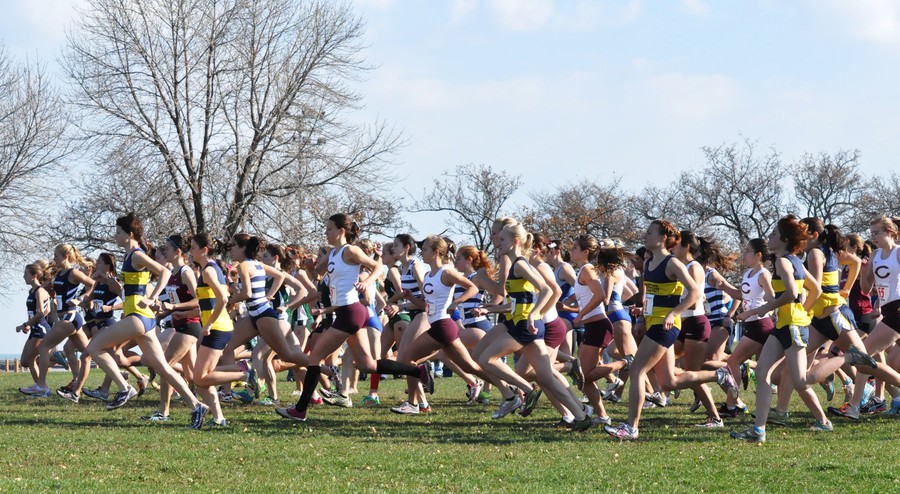 When it’s the postseason, every race can be your last. For the men’s team, with the exception of third-year Bill Whitmore, Saturday’s Midwest Regional Championship at Saukie Golf Course in Rock Island, IL concludes what was a promising season. For the women’s team, though, Saturday’s meet was the one they had been waiting for, and they came together at just the right time.

Going into the Championship, the Chicago men, ranked sixth in the field, needed at least a fifth-place finish to get an at-large bid and advance to the NCAA National Championship next weekend in Oshkosh, WI. They finished ninth. The women, the sixth-ranked team at Rock Island, needed at least a fourth-place finish. They did one better, finishing third.

The Maroon men needed a good finish, but they didn’t get it.

“I think we definitely did not perform to our capabilities on Saturday and would even go as far as saying it was our worst race of the season. Most of our runners felt good at the beginning of the race, but fell back hard towards the end,” fourth-year Brian Schlick said. “It is tough to say why—perhaps our nerves got the best of us.”

“There simply was no room for error and we did not have our best day,” head coach Chris Hall said.

While the women’s team aimed for at least a fourth-place finish, they ended up edging out the North Central (Ill.) women by four points to finish in the top three.

“This past weekend was pretty awesome, and I think a lot of us are still on cloud nine,” fourth-year Sonia Khan said. “The race was pretty exciting because we were able to keep six runners in front of North Central’s four and five [runners], but I don’t think any of us thought we were actually beating them until after the race when Coach Hall told us we may have beat them.”

Third-year Kayla McDonald described the team’s determination and zeal in their performance at the meet, which was hosted by Augustana in Rock Island, IL.

“At that point we weren’t running for ourselves but for each other, and that’s what meant the most,” McDonald said, “the fact that we all worked together for one common goal.”

For the men’s team, Saturday’s race was a frustrating end to an otherwise propitious season. Yet Hall recognized that the team faced a competitive field, and that they simply did not perform as well as they desired.

“It’s difficult to explain what happened on the men’s side. From all indications the team was very well prepared to race, but the Midwest region is extremely challenging. All the teams that finished in front of us were nationally ranked, as were a couple behind us,” Hall said. “The guys were extremely disappointed in the meet but clearly had a great overall season. We came a long way as a program but fell short of our final goal of getting into the NCAAs.”

Schlick also acknowledged that the team, which has had many consistent performances throughout the season, failed to meet expectations.

“We were really disappointed after the race. We have performed so well all season,” Schlick said, “and really had yet to have an all-around poor performance up until this meet.”

But the men will still be represented at Nationals. Third-year Bill Whitmore finished fourth overall at the meet, and qualified as an individual for next weekend’s race. Whitmore, along with third-year Isaac Dalke, were named to the All-Region team after the race, a distinction given to the top 35 finishers. Dalke was 28th.

“Billy ran outstanding. That was the second highest finish ever by an individual from Chicago in the men’s regional meet, only behind Tom Haxton who was sixth in the country that year,” Hall said. “He was extremely focused on the race and I believe even surprised himself a little.”

“All I knew and all that my coach told me was this was the last opportunity I had this season to take a chance and do something that I have never done before,” McDonald said. “So I put aside my fears and that day the only thing I was thinking about was my teammates and how much we all wanted to make it to Nationals. I think that’s what fed my drive to race hard that day.”

As the men’s season ends, the track season begins to come into focus.

“I think we will look back on this performance with regret. It is a tough way to end a promising season,” Schlick said. “All we can do now is get ready to have a great track season.”

But for the women’s team, as well as for Whitmore, the National Championship on November 19 lies ahead. It’s an exciting time to be a Maroon.

“Nationals is pretty spectacular, and the culture of the meet is truly a unique experience,” Khan said. “This year, there are no expectations. We have been the underdogs all season and it is pretty fun to work your way up.”