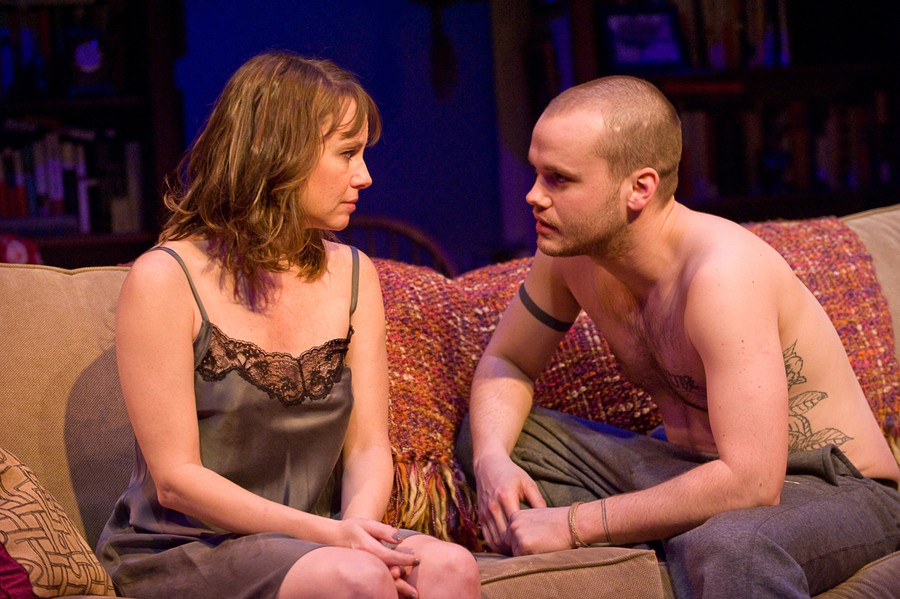 What do you get when you combine sex and technology? Steppenwolf’s Sex with Strangers depicts a fledgling romance of two people caught in different stages of life and technological advancement. Playwright Laura Eason creates this strong juxtaposition with Olivia and Ethan, two writers seeking solutions to professional problems that the other could easily solve. However, a predictable plot leads to two very predictable characters, despite how different they are in the beginning.

The play opens with Olivia (Sally Murphy), a single woman nearing her 40s, editing her latest novel and waiting out a blizzard in an isolated inn. She is harshly interrupted by Ethan (Stephen Louis Grush), a younger man who also comes to stay at the quiet, remote inn. Ethan is brash, frantic, impulsive, and very liberal with the wod “fuck.” Unlike Olivia, who’s resolutely anti-technology, Ethan is unsurprisingly reliant on it. Through what sounds like a painfully forced conversation, Ethan reveals himself as the notorious author of Sex with Strangers, a blog-based novel written about his heartless and raunchy sexcapades. Olivia, though keeping her distance, gains interest in the edgy but smooth 20-something.

After realizing there is no Internet, TV, or other electronic escape, Ethan suggests that he and Olivia sleep together. Of course he wants to—the audience expects it, but we did not expect this older, wiser woman to give in to his flattery. At first she resists his advances: “I can’t do that!” she says. “We’re perfect strangers!” But when Ethan confesses that he is in love with her writing and begins to quote her last book, Olivia immediately takes up the mind-set of a giddy, naïve teenager and agrees to sleep with him.

After a couple more days alone in the inn, Ethan is eager to read more of Olivia’s work and asks to read her latest novel. Here it becomes apparent that Olivia’s new book symbolizes her relationship with sex. She doesn’t want him to read her precious new book. She’s protecting herself because of the mixed reviews she received for her last novel.

But, so far, aren’t mixed feelings all around her? Olivia met a younger guy whom she did not know at all, and she is uncertain about his sincerity. Yes, he seemed like an asshole, but he could have a poignant inner sensitivity that he has yet to reveal. Despite her aversion to his vulgar disposition, she lowered her guard and slept with him…again and again. She also has mixed feelings for Ethan. She can trust him enough to sleep with him, but not to show him her book.

The first act ends with Ethan leaving for L.A. with a promise to return to Olivia when she goes back to her apartment in Chicago. Contrary to my expectations, Ethan fulfills his promise. But other than that, the progression of the play becomes painfully predictable. Despite the conflict both between and inside the characters, it gets muddled in an unoriginal plot.

The couple seems to switch roles completely. As Ethan tries to crawl away from his notorious reputation and Olivia jump-starts her writing career, their impulsive sexual adventures die down. Eason leaves the final scene open-ended with the newly engaged Olivia looking out the door, contemplating whether or not she will meet up with Ethan at a nearby bar. Will she settle for her predictably boring fiancé, or will she take a chance and run after the appealing man nearly 15 years her junior?

The characters had much promise, but their progression on the stage just did not serve my expectations of a story that was described as one that would “speak acutely about the contemporary landscape of technological communication and the interpersonal relationships that construct authorial identity.” So what is the moral of the story? Maybe it’s just “keep your book shut.”