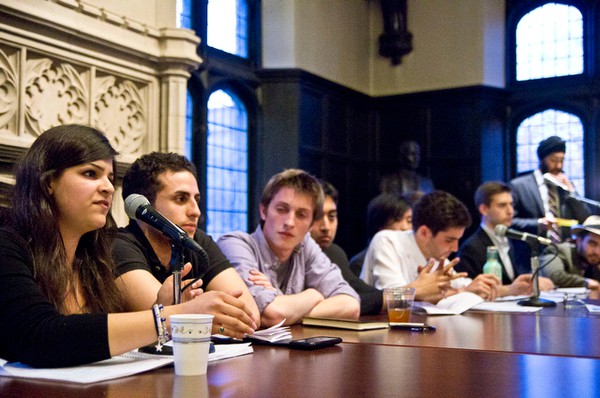 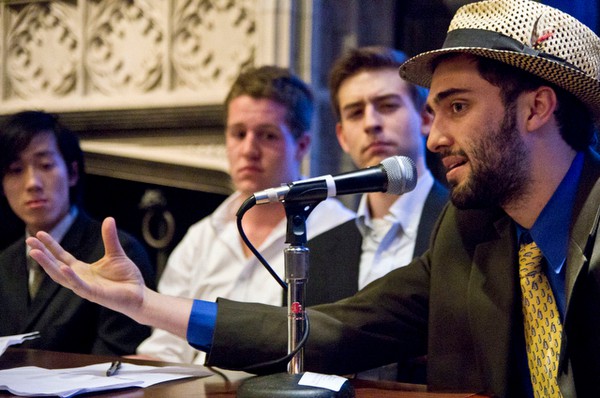 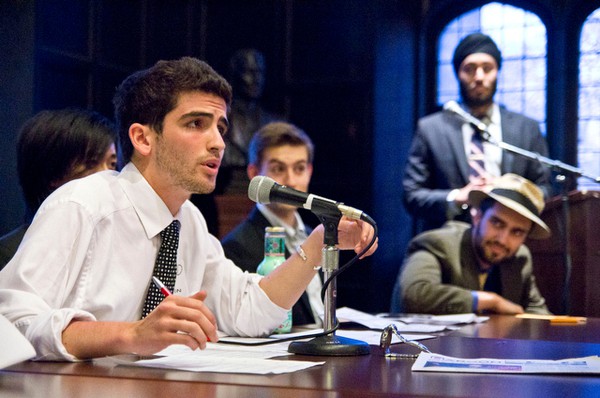 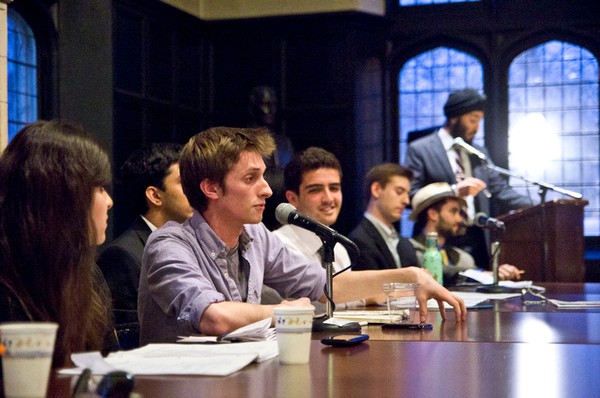 Students and administrators filled the McCormick Tribune Lounge last night, where the four parties running for Student Government (SG) executive slate and candidates for undergraduate liaison to the Board of Trustees and Community Government Liaison debated on a wide array of student issues.

The debate was the first event in preparation for the SG elections taking place from April 19-21. Campus and city transportation initiatives along with technology overhauls and budgetary issues dominated the discussion.

The atmosphere of the debate remained lighthearted, despite interjections from rowdy fraternity brothers and others who joined with cheering and mockery.

Continuing last year’s initiative, audience members were encouraged to submit written questions prior to the debate instead of directly addressing the candidates, which helped maintain order and a timely schedule.

Like last year, there was no candidate for the Graduate Liaison position. Second-year Angela Wang runs unopposed for Community Government Liaison, a position introduced last spring.

Four executive slates, The Uncommon Fun, LiveChicago, United Student Alliance, and the Moose Party pinpointed a few current problems with SG during the debate, including the scope, budget, and accountability of the current SG initiatives.

The Uncommon Fun specifically targeted SG excessive spending. “It’s our feeling that Student Government takes up far too much of the student life fee. I’ll give you an example from this campaign: Who ordered $300 for copying? Do we need 700 flyers?” third-year and member of the Uncommon Fun slate Adam Hemmings said.

Instead, United Student Alliance proposed SG expansion to control the SG budget. The slate would add an SG treasurer to balance the budget over the course of the slate’s proposed technology overhaul.

“This treasurer will take hold of a database that controls an excel spreadsheet of all the numbers of all the funds in one centralized system. There is no need for Student Government to meet for six hours anymore to try and figure out where the money is going.”

Some popular issues such as campus housing and dining seemed to fall to the wayside, receiving only token attention by the Moose Party.

“The CEO of Aramark is on the board of UChicago, and we’re willing to let him continue his contract if he eats at Bartlett for a year,” third-year Moose Party candidate William Robert Dorsett said.

First-year Xiafei Zhang, first-year Katie Burkhart, and third-year Nakul Singh are all vying for the position of undergraduate liaison to the Board of Trustees. Each candidate shared a desire to convey the needs of the student body to the Board, the major task of the liaison.

Zhang criticized the inefficiency of SG’s current use of online polls, and a lack of publicity initiatives by University administration.

“We are not as prestigious as other universities just because we don’t do a simple thing like publicizing,” he said. He pointed to a lack of University recognition as a problem for recent graduates in the job market.

Singh praised the current work of the Socially Responsible Investment Committee, a coalition of RSOs seeking socially conscious investments by the University. Unlike Zhang, Singh argued that social media was essential in tapping into the student body on these issues.

“More importantly, I think that we need to separate from the more traditional approaches, and I think we need to do more with social media. People don’t really like coming out to physical events. People like staying in their rooms and participating on Facebook,” Singh said.

“If I was to give any parting advice it would be to break up the work and make things less complicated. We need to actually zoom in on some of these projects, instead of having a broad platform.”