This. Is. Chicago. Spartans come to town for intraconference battle 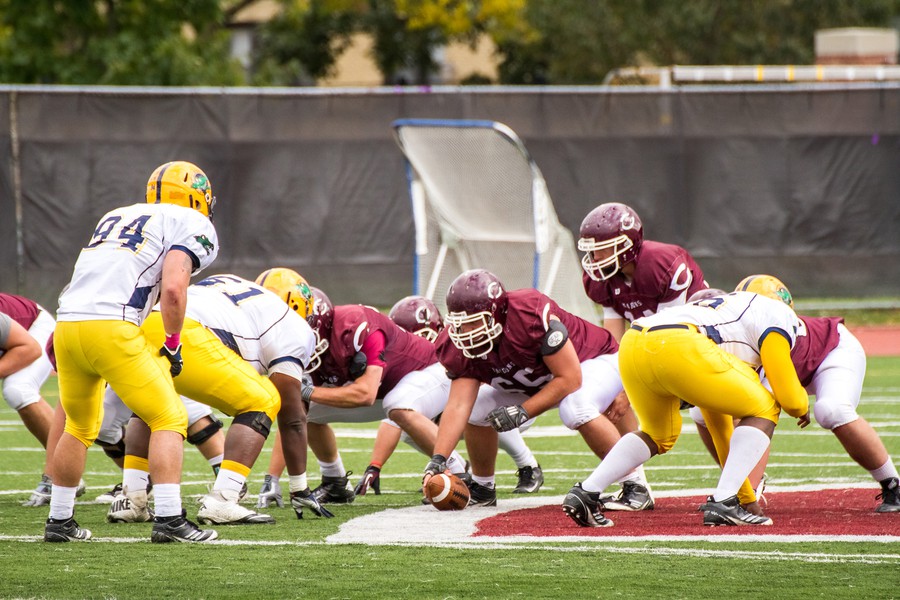 Coming off a solid 23–7 win over Hiram, the Maroons (4–3) look to keep their momentum going in their UAA opener against Case Western (4–3) this Saturday.

Since 2010, these teams have split their head-to-head meetings, with Chicago pulling out a 24–20 victory two years ago, followed by a 6–0 Case win last year in a defensive showdown.

“We’re the only UAA team to beat Case over the last five years,” head coach Dick Maloney said. “This has developed into a great little rivalry.”

“Stopping the rush is always a focus for us. Good ol’ Manny is a good receiver, too. He’s a key to their attack,” Maloney said.

Chicago’s defense will still have to be on its toes, ready for a balanced charge.

“They have also shown the ability to throw the ball effectively, so we have to be wary of that, too,” third-year defensive tackle Mike Cifor said.

On the offensive side of the ball, third-year quarterback Vincent Cortina is hoping to avoid the goose egg in this year’s contest.

“We are confident we can put up points this year,” he said. “We have most of our offensive players back from last year, and we’re hoping that experience will lead to fewer mistakes.”

“They don’t change their defense much and trust their [athletic] players to make the plays. As a result, I don’t have to worry about the coverage as much,” Cortina said. “I just need to get the ball into the hands of the playmakers and let them make moves.”

Chicago has been plagued by slow starts this season, and they’re hoping to turn that around this weekend.

“I think we need to be more focused and have a sense of urgency to score this week,” Cortina said.

Maloney is on the same page with his quarterback. Against Wittenberg two weeks ago, Maloney tried to inspire the offense by pulling a fake punt out of his bag of tricks. Instead of waiting for a lull in the offense this week, he hopes to catch Case’s defense off guard.

“They’re a very, very fundamentally sound defense,” Maloney said. “They will give us all we can handle, and we’re looking to do some different things…. You’ve got to throw a few wrinkles in there.”

Being homecoming weekend, the atmosphere could also play a role in the game.

“I don’t think Homecoming affects the guys,” Maloney said. “But with parents beginning to come for the weekend, we’ll have to keep the players focused on Friday. Overall, I think it’s a great atmosphere for a football game.”

Not only will the campus have its hands full with food and festivities, but the Maroons will also be busy with a solid Case team that comes to town for a 1 p.m. kickoff at Stagg Field.