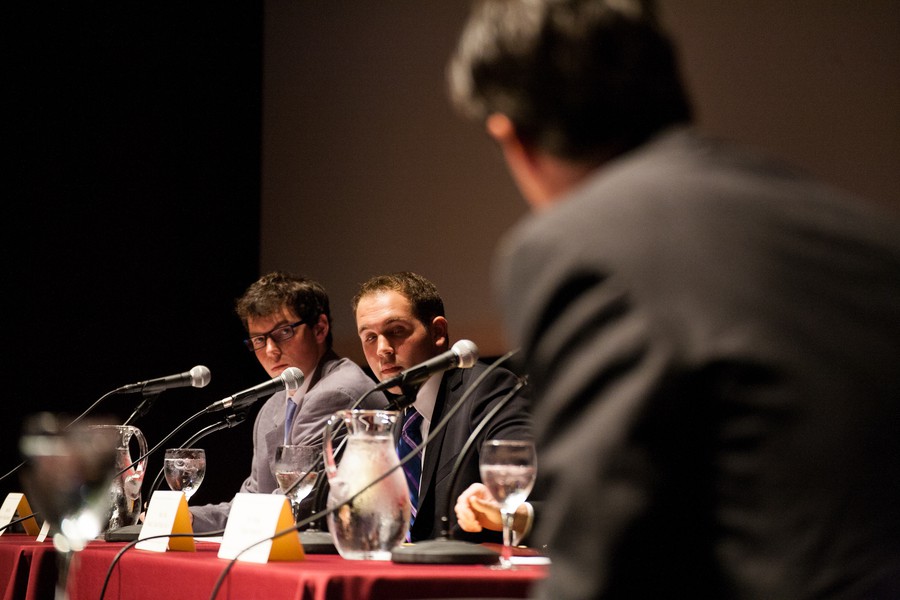 Hours before President Obama and Mitt Romney faced off in Denver on Wednesday evening, the man responsible for bringing the two candidates together took the stage in the Logan Center for the Arts and told a packed audience the unlikely path that had produced the modern presidential debate.

The man was Newton Minow, the vice chairman of the Commission on Presidential Debates, and the opening speaker of a debate watching party, the first event of the year hosted by the Institute of Politics (IOP).

“In 1955, President Eisenhower had a heart attack. And I suggested to Adlai Stevenson, that instead of a conventional kind of campaign where candidates ran all over the country—great strain, great stress—that it be a series of televised joint appearances. And that idea was rejected flatly by everybody,” he said, discussing his involvement in the growth of the presidential debate over the last half century.

In 1960, Minow later helped Stevenson persuade Congress to repeal the Equal Time Law, which required broadcasters to give equal airtime to all candidates seeking a political office, including those not associated with the Democratic or Republican parties. Congress agreed, a decision that led to the famous Kennedy–Nixon debate, Minow said. After Kennedy’s election, Congress declined to suspend the rule again until 1976, when President Gerald Ford agreed to debate Jimmy Carter to improve his standing in the polls.

Minow also described how the Commission developed the format for this year’s presidential debate, which was contrived to encourage free flowing discussion between candidates. Immediately following Minow’s conversation with IOP Deputy Director of Programming Steve Edwards, four U of C students tested the debate format.

In a debate that focused on the economy, healthcare, and the role of government, third-year Eric Wessan and fourth-year Mark Mahvi made the case for a Romney presidency while contending that President Obama had hurt the economy and failed to fulfill his promises to lower unemployment. Fourth-year Stephen Lurie and third-year Eric Thurm defended President Obama’s first term, saying that the country was making progress and should continue with the President’s economic plan.

“I think both sides certainly put up a vigorous, and almost sort of wonky, defense of their policy positions. And the format really allowed for a free discussion to flow instead of just 30 [second] sound bites,” third-year audience member Adam Chaikof said.

Afterward, students in the audience viewed the presidential debate on a large screen in the auditorium, the culmination of the evening’s events.

Dillan Siegler, the IOP’s new senior associate director, said that the debate watching party was a good way to balance theory and practice.

“It was then an opportunity to understand the actual real world, live issues that are currently happening, but then have our UChicago students, very, very bright minds, reflect on those, interact with those issues, engage with those issues,” she said.