HP houses: the sweetest around 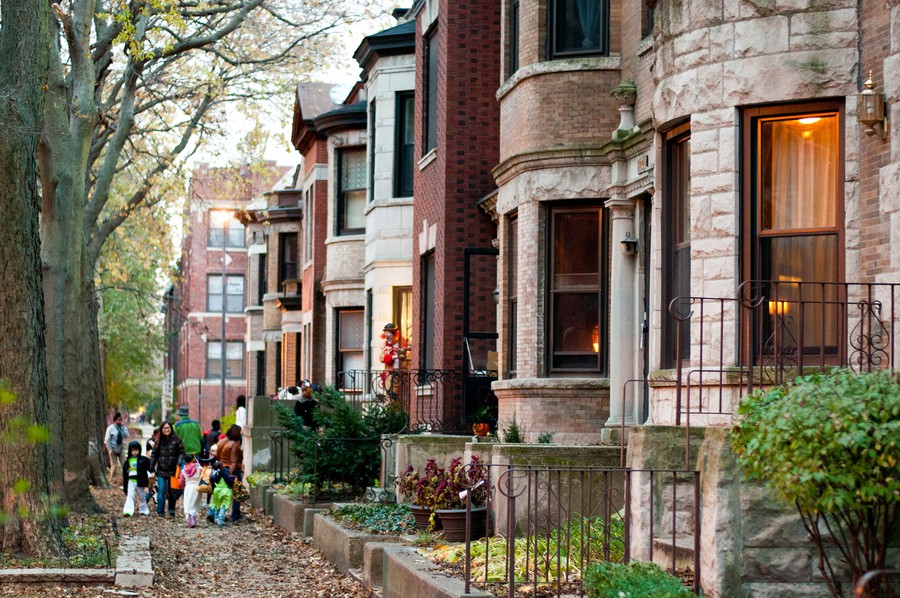 The trick to securing a good haul of treats often depends on real estate, according to experts of the trade, and Hyde Park is prime candy-asking turf.

Every Halloween, the neighborhood is flooded with ghosts, ninjas, superheroes, and princesses. In particular, the usually calm 5200 block of Greenwood Avenue known as ‘Professors’ Row’ welcomes hordes of costumed kids and accompanying parents coming from Kenwood, Washington Park, Bronzeville, and Woodlawn.

On Wednesday evening, the block was teeming with activity as several residents stood outside their homes and greeted trick-or-treaters.

“They’ve been coming in big groups; some are from around here, lots of kids come from the elementary schools nearby,” fourth-year Ben Lange said as he handed out candy in front of his apartment building at 52nd Street and Greenwood Avenue.

For the trick-or-treaters, it’s all about the weight of the bag at the end of the night, and Professors’ Row is known for being especially generous. For parents, Hyde Park is the annual destination on October 31 because of safety concerns.

“We like [Hyde Park] because we don’t have the same problems here as we do in our neighborhood. We feel comfortable and we don’t have to worry about people messing with [us] or messing with the kids,” one woman said as her young daughter tugged her along.

The size of the candy bars given on Professors’ Row reflects the prices of the 20 houses on the Row: each is worth at least a million dollars. The most recent sale on the Row, by Carol Mosley Braun, the first ever African-American female senator, cashed in at $1.2 million, according to The Chicago Tribune.

Even off Professors’ Row, which was granted protected status as a Chicago landmark in 2004, the average price per square foot for homes in Hyde Park last quarter was $305, while the Woodlawn equivalent was $42, according to real estate website Trulia.

Take, for example, the value gap between two 5,300 square foot houses in each of the neighborhoods. The Hyde Park house, built in 1881, is a single family home with six bedrooms and three bathrooms and is worth $2.19 million. A multi-family home, built in 1886, on 60th street and King drive, just on the northern edge of Woodlawn, has six bedrooms and four bathrooms and is worth $260,000.

Diane Silverman (A.B. ‘58), who owns the brokerage firm Urban Search Realty Owner, said the difference in prices between homes that are only several blocks apart is partially due to craftsmanship. Many of the more valuable homes in Hyde Park, including those on Professors’ Row, were custom built for U of C professors who had a particular design in mind and specific needs for themselves and their families. The houses in Woodlawn, in contrast, are more cookie-cutter.

“Basically, there is a very large difference between the house stock in Hyde Park and Woodlawn because they are really different neighborhoods architecturally,” she said.

The difference in value is also the product of time, Silverman pointed out. Hyde Park and Kenwood, which is a historical landmark and home to President Barack Obama, flourished during urban renewal in the 1960s and 1970s.

Meanwhile, the story of Woodlawn is less glamorous. As Hyde Park and Kenwood maintained their lofty economic status, Woodlawn declined for a number of years. It was not until a decade ago that Woodlawn experienced a “wonderful resurgence,” according to Silverman, during which new six-unit flats, 12-unit flats, apartments, and condominiums were built.

Then in 2008, when the recession hit, Woodlawn was especially affected, which made it more difficult for homes to maintain their value.

The annual October 31 exodus of Woodlawn residents up north vividly highlights this discrepancy between the neighborhoods for candy-askers and givers alike.

“It definitely feels safer in Hyde Park. I like it down here on Halloween, mostly because you see lots of police cars; cars are considerate, they stop when they see you walking through the street, and the people are friendly,” trick-or-treater Moriah Scott, 15, said.

Jake Interrante (A.B. ’12) recalls his first Halloween at his apartment on 50th Street.

“I went grocery shopping at Michael’s on 47th street, and on the way back this woman approached me and said, ‘Trick-or treat, can I have your groceries?’” he said. “I couldn’t believe how difficult the situation is for people who live so close.”