Daniel Day-Lewis's transcendent performance as the 16th president of the United States leads the resonant (and relevant) film. 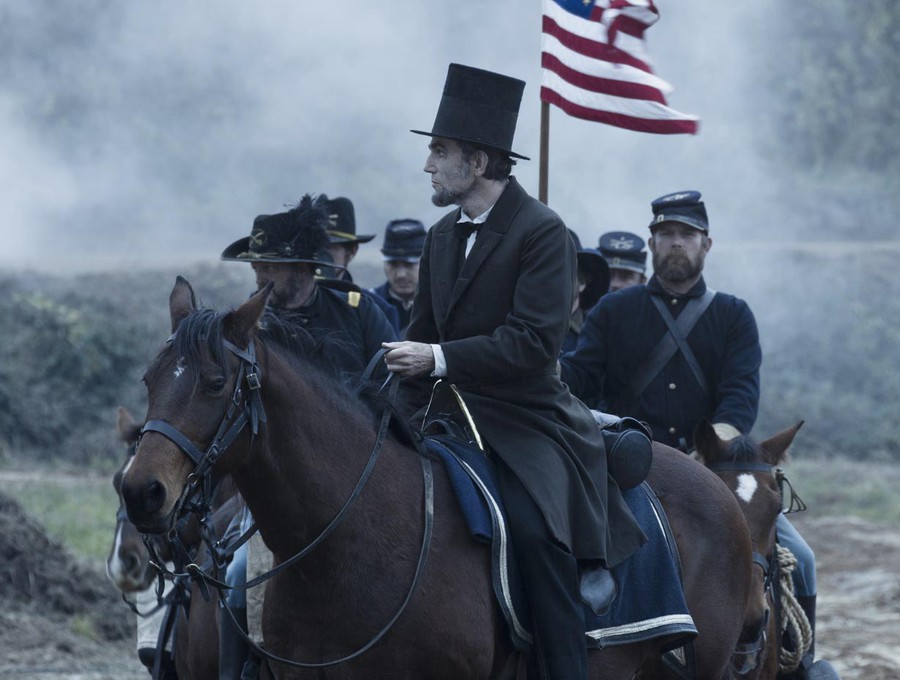 Lincoln (Daniel Day-Lewis) has a hat as tall as this film is long.

Having steered clear of the trailers, I didn’t quite know what to expect from Steven Spielberg’s latest period drama, Lincoln. I’ve never watched War Horse, so my points of reference were Saving Private Ryan, Munich, and Schindler’s List. Lincoln doesn’t feel similar to those films, and that’s perfectly fine—it has its own identity when compared to other Spielberg films, and in several ways is unique within the biopic genre.

Daniel Day-Lewis is Abraham Lincoln. Not plays, is. In case it hadn’t already been established, Day-Lewis’s reputation as one of the strongest actors of his generation is cemented here; Lincoln makes a strong case for his DNA being half-chameleon (the other half, Irish). If somebody wanted to make a biopic of Harriet Tubman, Lewis would probably be in the top ten actors vying for the role (which, in my opinion, would have go to the equally fabulous Viola Davis). Lewis’s real achievement in playing the role of Lincoln is the subtle manner in which he chooses to portray the legendary president. While others are bellowing furiously at the top of their lungs or making passionate speeches for or against the abolition of slavery, Lewis sits by calm and collected, effortlessly exuding a gravitas that draws all attention to him. When the audience finally gets to see an impassioned Lincoln, it is all the more powerful because of the restraint that he has shown throughout the rest of the movie.

When it’s not focusing on the battle to abolish slavery and keep the country united, the film provides a window to Lincoln’s own personal life. Rather than weighing down the movie, these scenes provide a breather from the intensity of the political scenes and add a dose of humanity to a man who is rightly viewed as a legend in history.

Another stand-out performance is Tommy Lee Jones as Congressional leader Thaddeus Stevens, a staunch proponent of the abolition of slavery. A majority of the wittiest and most overtly funny lines go to his character, who takes pride in calling out the other politicians on their shenanigans in a direct and often comically insulting manner. The rest of the cast does an overall great job, though Sally Field is the weakest link in her role of Lincoln’s wife, Mary Todd Lincoln. Joseph Gordon-Levitt does not get nearly enough screen time, since he was probably hired for a role that could have gone to any decent actor in order to attract his female fans.

The cinematography is also, as expected, top notch, helped in great part by fantastic use of lighting in certain scenes. Political junkies are bound to love this film as it provides an in-depth look at the strategies and maneuvers used in Washington, D.C. during the last few months of the Civil War. The overall climate is the war, but the battlefields we see on screen are sessions in the House of Representatives, cabinet meetings, and political deals made behind closed doors. Even those who don’t feel a particular affinity for politics are bound to laugh at some of the antics both sides employ, which are purposefully presented in a humorous light, unlike modern politics, which are funny in a sad, unintentional way.

Clocking in at two and a half hours, Lincoln is by all standards a long movie that runs the risk of feeling like a drag at times. Luckily, Spielberg manages to set a perfect pace, and I never felt the urge to glance at my watch. In a time when the country is divided by sharp ideological lines and incapable of coming together for even the most trivial decisions, Lincoln reminds us that there have been darker times in the nation’s history, and that we have managed to endure them.