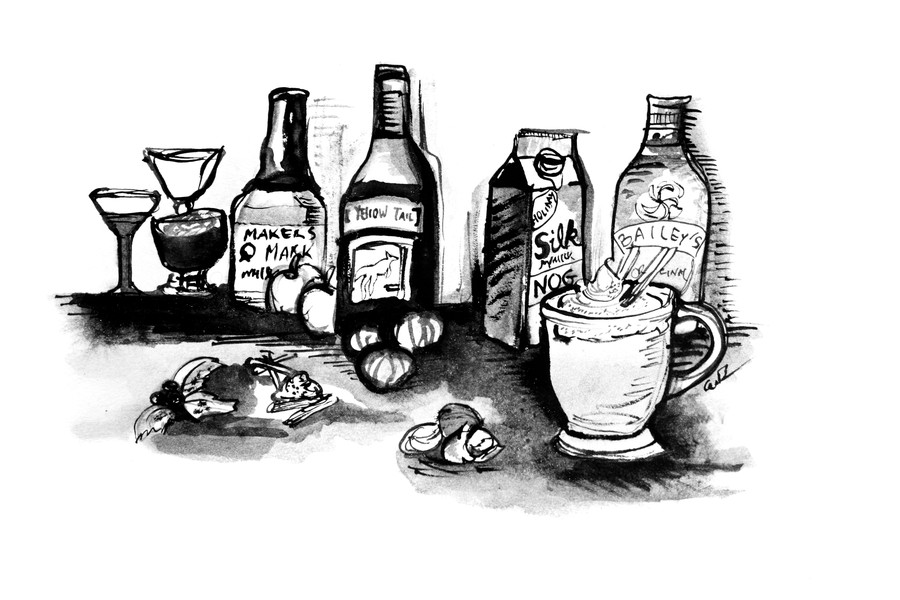 2 tablespoon simple syrup (can be made in advance)

Instead of adding spoonfuls of white sugar to a drink, which can end up as a grainy, syrupy mess on the bottom of a glass, try making your own simple syrup in advance. It’s easy—just mix equal parts sugar and water in a pot until dissolved and bring to a boil. This method of sweetening a drink brings an added benefit, as you can add a wide variety of ingredients to the syrup at the end to make an infusion. This recipe calls for an infusion of fresh thyme leaves, but the possibilities are endless. You can use anything from herbs like basil or cinnamon to citrus rinds, and everything in between. Plain simple syrup will keep indefinitely in the fridge, but if you’ve added an infusion, be sure to change your stock every few weeks or so, as there’s a small chance the infused oils can get funky.

This drink captures the flavors of Thanksgiving and is great for a late-afternoon cocktail break. Begin by making the simple syrup. When the mixture just begins to boil, turn off the heat and add a handful of thyme leaves. If you’re not able to find fresh thyme, a sweet Thai basil will work, as will a few sticks of cinnamon or even lemon rinds. Wait for the mixture to cool completely, then strain.

In a glass, mix two parts bourbon with two parts apple cider, one part simple syrup, and one part lemon juice. If you’re feeling adventurous, you can also throw in two parts brandy or any other fermented fruit brandy (like Calvados, made from apples, Poire Williams, made from pears, or Kirschwasser, made from cherries). Top with a few dashes of angostura bitters and stir. You can garnish with a slice of apple, pear, or another fall fruit. You’ll really taste the bourbon, so you might want to splurge on a nice one, or just drink it quickly.

Vin Chaud (all the way from France, y’all!)

Shoutout to anyone who has studied abroad in Europe during the winter—you may remember that this mulled wine can be found in plastic kettles in the backs of small bars all over Europe. Given the additions you’ll be making, it’s safe to start with a pretty cheap, basic red wine. This is the perfect moment for those awkward half-magnums of Yellow Tail one always has sitting around. You’ll just need one big pot and a spoon, which means cleanup will be super easy. Start by piercing the skin of a few clementines or other small oranges with cloves—no more than 20—and adding them to the pot along with a full magnum (the proper term for a 1.5-liter bottle of domestic wine) of a sweeter red, like merlot, shiraz, or a cabernet sauvignon from California. The wine should fully cover the oranges. Add a few cups of apple cider (tailor the amount to your personal preference) and 5 sticks of cinnamon. Do not use powdered cinnamon.

Set the pot on low heat. In about 20 minutes, or when a spoonful of wine will produce robust, thick steam, turn the heat off and ladle into a mug or glass. Top with 1/4 cup of brandy, port, or bourbon. If you want to get all fancy, garnish with a cinnamon stick or even an orange slice, but this is great on its own in a mug by the fire, or in a travel mug for your icy-cold morning walk to class.

You can keep everything in the pot for a few hours and reheat it when you’re ready. Just be sure to keep the mixture cool until you’re ready to drink, or the alcohol could cook out. If you want to get adventurous, you can add whole small apples, lemons, or any other interesting ingredients to the pot before cooking. Even though you’re making a large batch, don’t be afraid to experiment with different combinations of autumnal ingredients.

(Did you know that on Christmas day in 1826, an event known as the “eggnog riot” broke out at West Point and led to the court-martialing of 20 cadets? Among the rioters was Jefferson Davis, the future president of the Confederate States of America.)

If you’ve ever had a hand-whipped cup of piping hot eggnog with high-quality bourbon and just a dash of cinnamon on top, you know how delicious this drink can be. The problem is that eggnog is annoyingly difficult to make, contains raw eggs, and has the nutritional value of three candy bars. That’s right, an 8 oz. cup of eggnog averages around 350 calories and 21 grams of sugar. That’s just not going to fly—even if you’re not concerned about calories and sugar, drinking such a heavy, sugary drink, especially in larger quantities, is a quick way to make yourself feel really gross. So the challenge, then, is to make an novel nog that captures the essence of traditional eggnog—the creamy richness, warmth, and touch of spice that make it so irresistible.

Consider this quick and dirty eggnog alternative. Recently, Silk (bless them!) has released a “Soy Nog” made from soymilk, cane sugar, and natural flavors that has way less fat and sugar than regular eggnog. It is also lactose-free and vegan-friendly. If you’re using pre-made eggnog mix, heat it up in a saucepan and add between 1/4–1/2 cup of bourbon per serving, depending on how strong you would like the drinks to be. Ladle into glasses and top with a sprinkle of cinnamon.

If you want to deconstruct the drink even further, I’ve come up with this eggnog-inspired, warm Christmas treat. First, you will need to decide which type of milk to use. The lower the fat content of the milk the more likely it will be to curdle when liquor is added to it. Milk has protein solids called caseins that will bind to one another and become lumps if the milk becomes too acidic. Alcohol is a weak acid, so it’s difficult to mix the two together without ending up with something that looks like cottage cheese. In this recipe, skim milk is guaranteed to give you a lumpy, curd-y mess, so forget that. Using heavy whipping cream instead would land you in the same fatty mess as regular eggnog, so that doesn’t make much sense either. Your best bet is to use whole milk, though half-and-half is acceptable and 2% will work if you’re careful and attentive.

Pour 1 quart of milk into the saucepan and heat on low until it is at your desired temperature. It should be more than warm and less than hot. Add the packet of Jello pudding mix to the milk. If you can’t find that, be adventurous and add one teaspoon of vanilla extract with two of your favorite hot cocoa packets. Once that has dissolved, add one cup of Bailey’s (any variety is fine, but avoid the biscotti flavor) in small increments, stirring until fully incorporated. Then add one cup of bourbon in the exact same way, allowing for a bit of time between each addition to let the mixture sort itself out chemically. Finally, add 1/2 cup cinnamon liqueur, like Goldschläger or Fireball whiskey. The bourbon contributes the warmth we know and love from eggnog, while the Bailey’s brings a rich creaminess that allows us to reduce the milk and eliminate the eggs. The cinnamon liqueur is optional, and be aware it will make the drink taste faintly like Big Red gum. It can be replaced with a very small amount of cinnamon extract, a cinnamon simple syrup (see above), or even real cinnamon sticks. Top this off with a small amount of nutmeg.

When finished, you will have before you a decent approximation of eggnog that is drinkable, less sweet (though sugar can be added to taste) and, though strong, not as heavy as a regular glass of eggnog. Serve in a glass or mug with a sprinkle of cinnamon. Whichever option you choose—a store-bought mixture, the fully homemade version, or this alternative—it is sure to be delicious.