With fire and water, "Beowulf" wages war in Hutch Courtyard

The Classical Entertainment Society, along with the Dance Council and members of Le Vorris & Vox circus put on a fiery production of "Beowulf" in Hutch Courtyard. 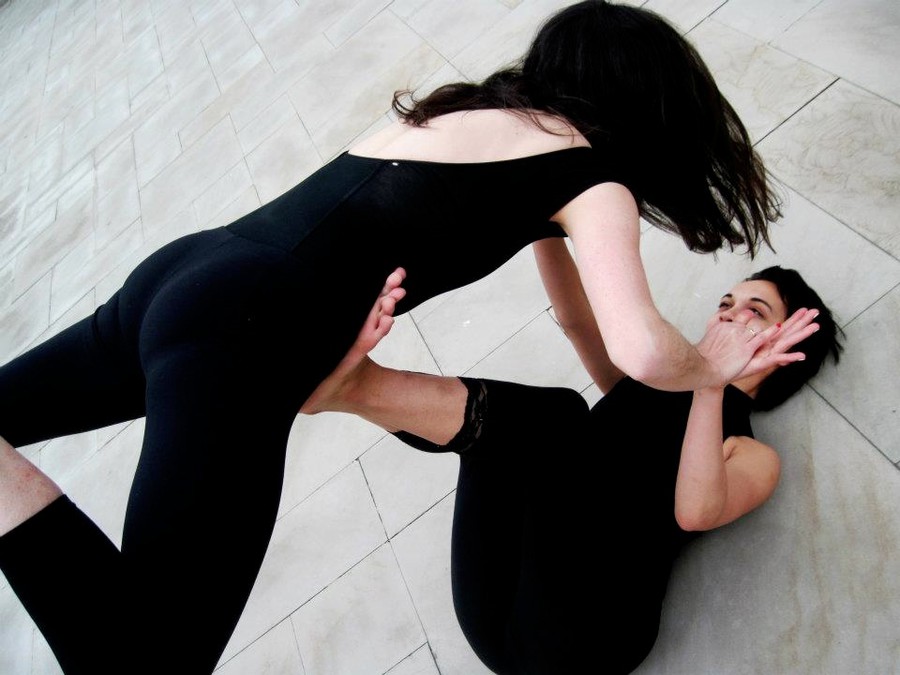 Fourth-years Jessen O'Brian and Steffi Carter fight to the death in "Beowulf."

Beowulf is a strange tale. The basic premise of this classic Anglo-Saxon text revolves around its hero saving a bunch of Danes from a monster who’s been terrorizing a mead hall (now there’s a barroom tale that makes the most drunken U of C frat parties seem tame by comparison). Put the classic story in the hands of the U of C Classical Entertainment Society, the Dance Council, and members of Le Vorris & Vox circus troupe, and the epic poem becomes a unique amalgamation of dance, circus, and shadow puppetry. Set it in Hutch Courtyard on a frigid April weekend, and you have a recipe for a pretty unusual performance.

And unique, it is. The play begins with the citizens of Denmark dancing around the courtyard dressed in black, recounting the tale separately and in unison as the threat of Grendel, the monster hell-bent on vanquishing the innocent Danes, looms ever closer. Be prepared for a good amount of shrieking and grunting when a fierce and determined Beowulf, played by fourth-year Steffi Carter, finally vanquishes the monster. While Grendel, sporting Wolverine-esque plastic claws, may not be fearsome enough to warrant the terror of the Danes, she certainly makes up for it in enthusiasm and stage-fighting prowess. Other notable moments include a dramatic battle between Beowulf and Grendel’s mother and her cadre of hell-bound demons and ghosts (props to the cast for jumping, splashing, and dancing in the Hutch Courtyard fountain and not getting hypothermia in the process), and the final showdown between Beowulf and a giant scarlet dragon puppet. While the dragon may not have actually been breathing fire, fire spinners added to the dramatic effect of the fight, thanks to members of Le Vorris & Vox. (Note to the U of C acting community: Fire makes everything sexier. From now on you should try to include it in as many productions as possible.) The fire and water effects are one of the perks of having performances outside.

Normally, performing in Hutch Courtyard has its risks; it can be hard to hear, particularly when the play in question is an epic poem or in Shakespearean English, as the case may be. But second-year director Eric Shoemaker and the cast of Beowulf utilize the space so well that it makes up for any dialogue lost to the capricious Chicago wind or droning of helicopters. The cast simply couldn’t have pulled off epic battles, fire tricks, or even something as simple as Grendel slinking moodily in the background of a scene by the fountain in any regular theater.

The symbolism of performing Beowulf right now shouldn’t be lost on U of C students. It’s fifth week of spring quarter, midterms and BA proposals are looming on the horizon, and we’re probably all wishing for a hero to bound into our lives wielding a sword. But while we’re more likely to be slaying academic than literal demons this weekend, Beowulf offers a satisfying, if temporary respite, from our quotidian problems. Don’t be afraid to join the battle.