Does God exist? Gentlemen, you have two minutes. 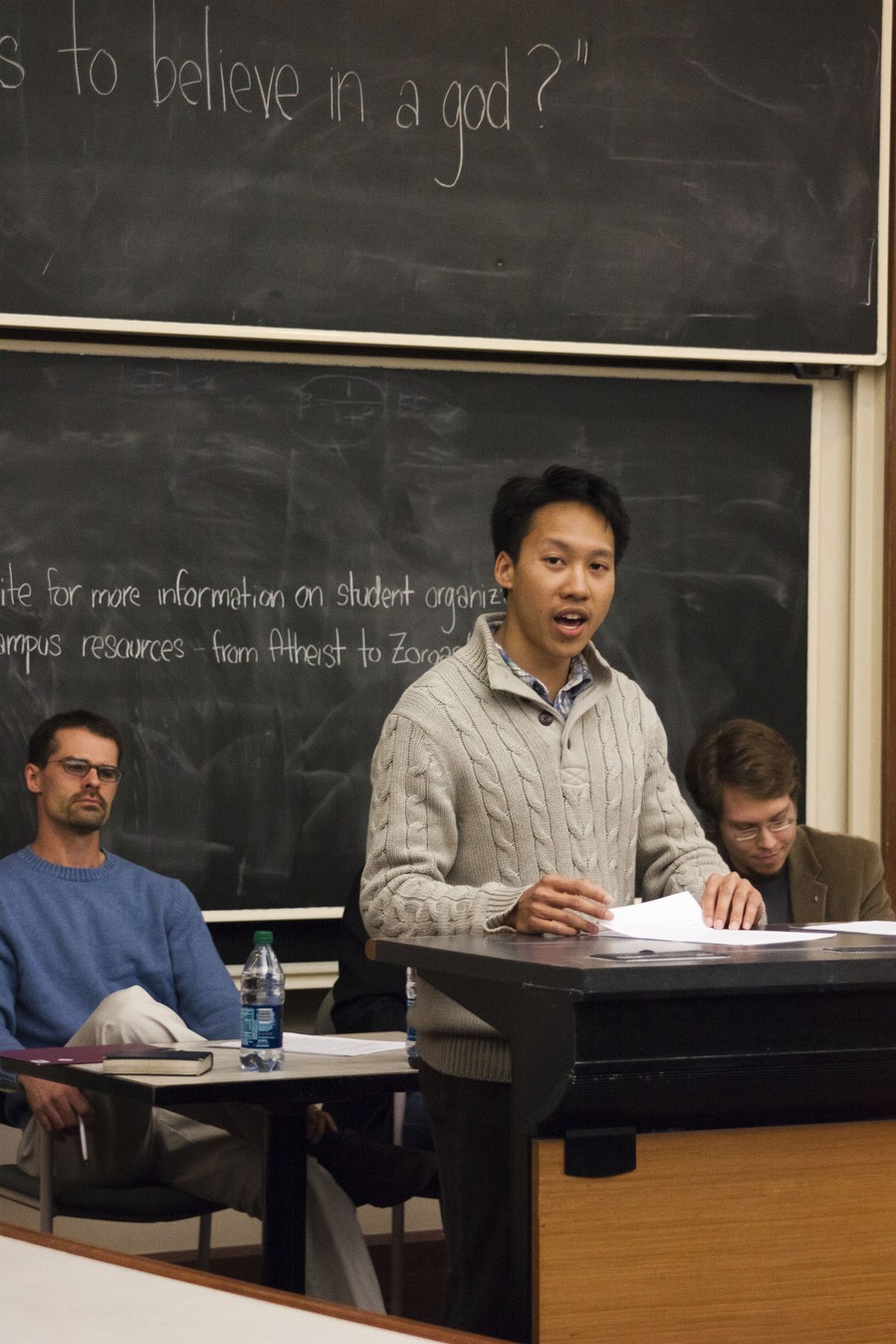 Stuart Hall was abuzz with talk of sin and science Monday evening, as religious and secular community members tackled one of life's most contentious questions: Are there good reasons to believe in a god?

In a debate hosted by the Spiritual Life Council (SLC), the faithful and the non-believing sparred over the historicity of holy texts and the ethics of religious institutions.

Arguing against the existence of a divine presence were Divinity School student Josh Oxley, whom the Spiritual Life Office brought on as a Humanist Adviser in 2010, and physics graduate student Ben Zalisko, who founded the Secular Student Alliance.

The pair went up against Brad Beier, a pastor at Living Hope Church in Woodlawn, and third-year Junyi Lee, the church's campus president.

Lee began by presenting human dignity as a product of God's creation, while Zalisko criticized religion's monopolization of "moral high grounds," arguing for ethics separate from religion. Zalisko also examined God's existence through the scientific method, concluding that believers had not met the burden of proof.

In his rebuttal, Beier defended the validity and historicity of the scriptures as foundational documents and sufficient proof. He also characterized God's existence as necessary in order to explain the social phenomena of sin, evil, and suffering.

However, Oxley asked the audience to focus on the talk's central question and to avoid distracting questions, like "Is it pragmatic or beautiful to believe in a god?"

The debaters elaborated on the compatibility of religion and science, sources of morality, and shifting interpretations of religious texts, finally coming to a stalemate.

Many from outside the University turned out for the debate.

Khaldoun Sweis, a philosophy professor at Olive-Harvey College downtown, encouraged his students to go the debate for extra-credit. "I wanted my students to be exposed to critical thinking, especially about one of the most important questions of life," he said.

Andrew Hulede, one of Sweis's students, appreciated the engaging discussion. "The debate just spurred so many questions, and it just felt so good to know that these thoughts are still alive," he said.

However, Griffin Jackson, a Harris School graduate student, said he wished that the debate had focused on larger issues. "The debate ended up getting trapped in and bogged down by irrelevant details—details that both sides should have just have acknowledged as non-falsifiable," he said.

This followed similar debates from the Christian Fellowship, the Secular Student Alliance, and the Philosophy Club. Still, SLC President Philip, who moderated the debate, said he hopes to sponsor similar events incorporating other religious perspectives.