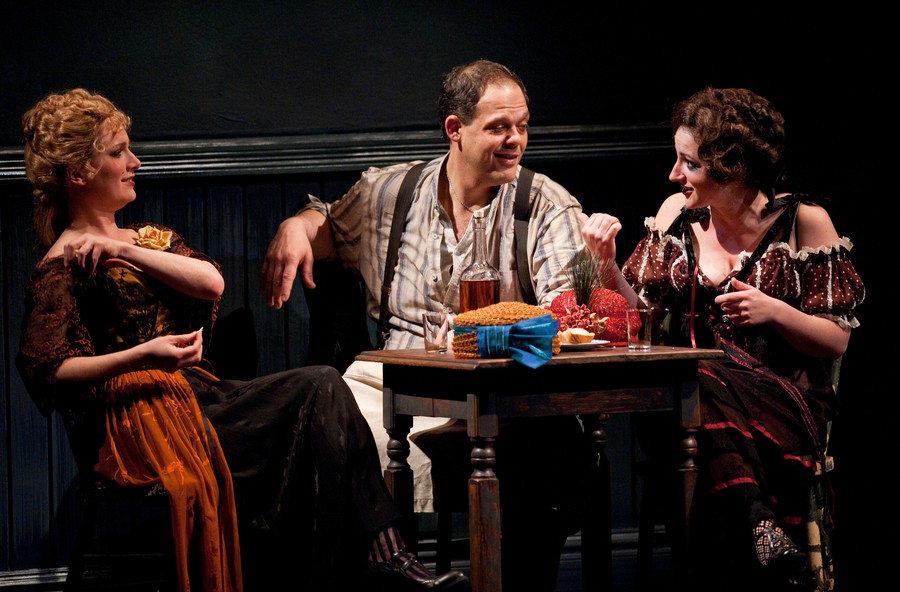 When the curtain comes up at the beginning of the Goodman Theatre’s production of The Iceman Cometh, eight men are passed out drunk in a 1912 Greenwich Village saloon run by Harry Hope (Stephen Ouimette). There is a bit of murmuring as some of the men begin to stir, but the only articulate one among them is Larry Slade (Brian Dennehy), who has apparently been roused to conversation by the young, sober Don Parritt (Patrick Andrews), once a member of a vaguely referenced “movement” that Larry has since abandoned—a movement doomed, in his own words, by the intellectual confusion of having to see “all sides of [every] question.” Larry, marvelously portrayed by Dennehy, is a drunken bum who has given up on life and, as Larry says in his own words, “taken a seat in the grandstand of philosophical detachment.”

Soon we are introduced to the other inductees of Harry Hope’s graveyard of a boarding house: Willie Oban (John Hoogenakker) is a one-time Harvard man, who, between plying his companions with butchered, tuneless renditions of old college songs, tells tales of his life as a prince whose father the district attorney deposed over a squabble. Hugo Kalmar (Lee Wilkof), seated to Larry’s right, is a former editor of anarchist periodicals with a German accent, who, though rarely roused from his slumber, addresses everyone as a “monkey-faced bourgeois.” Seated nearby is Joe Mott (John Douglas Thompson), a former proprietor of an all-black gambling house.

Eugene O’Neill’s play centers not only on the American dream, which he would probably call a delusional, psychological construction, but also on the human tendency to embrace all pipe dreams with enthusiasm. All of the men live in a romantic haze of what they once were or hope to become. But because they are utterly intoxicated and downtrodden, they are incapable of achieving those dreams. Life is too much for them to handle; better take comfort in alcoholic reminiscence and make merry with their fellow salon inductees.

What sustains them is the mantra that, as Larry puts it, “the truth need have no bearing on anything; why not drink some more and simply be of good cheer?” The fact that they are lying to themselves does not seem to matter—that is, until their old drinking companion Hickey (Nathan Lane) arrives, having reformed his behavior. He has given up drinking, and now urges all his old friends to abandon their own bacchanalian fantasies: to quit lying to themselves, to accept life for what it is, with all its hardships, and to rejoice for having put an end to the delusional goal of leading a painless life. That the “Iceman” (the 1912 equivalent of the milkman or the postman) may cometh for a rendezvous with your spouse is perhaps a fact of life, but he who rejoices in ridding himself of the false hope that life can be made free from pain is the wise and happy man. He who responds by taking solace in further delusion is doomed to suffer. That Hickey’s wife Evelyn is now out of the picture (did she run off with the Iceman?) appears to give even firmer ground to Hickey’s philosophy.

Though it runs for 4 hours and 40 minutes, The Iceman Cometh is no longer than it ought to be. Theatergoers should flock to artistic director Robert Falls’s exquisite production with a nearly flawless cast of highly reputed actors. It is certainly tempting to question Falls’s decision to cast Nathan Lane, best known for comedic roles in films like The Birdcage (1996) and the musical version of Mel Brooks’s The Producers (2005). And though it may take some time for us to convince ourselves that the familiar, nasally voice we know so well is actually doing O’Neill, Lane gives quite a powerful performance in the end and admirably portrays Hickey’s enthusiasm for personal liberation.

That moral of the play becomes infinitely more complex and uncertain than the simple, neo-Epicurean doctrine that Hickey comes to promulgate. Ultimately, the drama is a testament to O’Neill’s dramatic genius and cements The Iceman Cometh as a masterpiece of the 20th century.