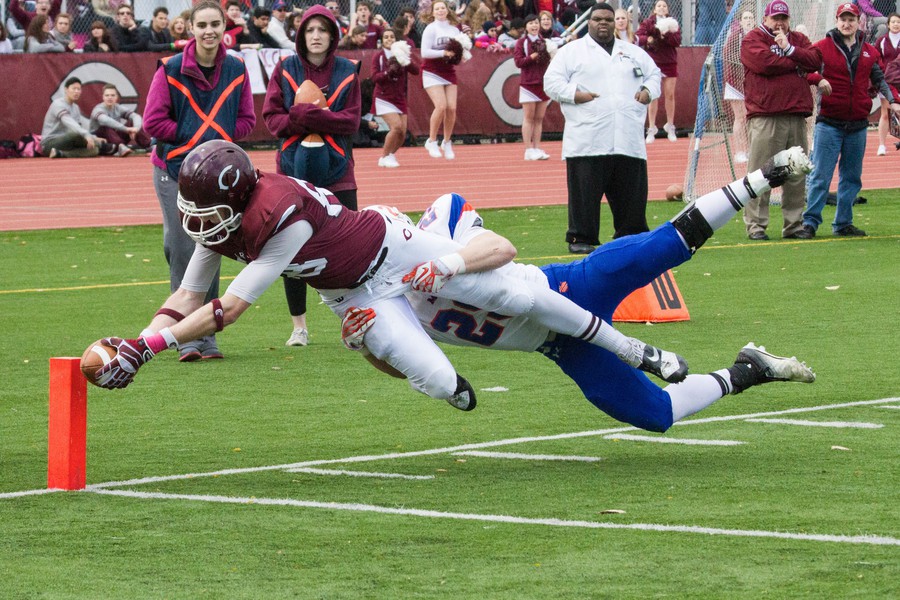 The football team gave its fans a reason to cheer against Macalester (2–4) this weekend, and the homecoming game was audible from across the street and through the crowd of people tailgating, grilling, and eating, as Chicago (5–1) beat the Scots 26–7 without giving up a point after the first quarter.

The Maroons scored first with a field goal in the seventh minute, but Macalester came back just a minute and a half later with a touchdown. Their team’s quarterback, Samson Bialostok, ran 62 yards to give the Scots a surprise 7–3 lead.

Even though it was facing an early deficit, Chicago didn’t change its style of play.

“The coaches put together a really good game plan and we were able to execute it as a team,” said fourth-year defensive lineman John Marshall. “We knew that if we did what we were supposed to, we would control the game.”

Neither team threatened to score again until five minutes into the second quarter. Chicago advanced up the field with mostly passing yardage. Then, fourth-year quarterback Vincent Cortina found second-year wide receiver Cole Thoms diving into the back corner of the end zone for a five-yard touchdown pass.

Chicago continued to shut out Macalester despite Bialostok rushing for a total of 122 yards. Head coach Chris Wilkerson credited the Maroons’ good play to a balanced effort. “Overall, it was a good team performance. The offense, defense, and special teams complemented each other very well,” he said.

In the third quarter, Chicago second-year defensive back Christopher Dengler intercepted a Macalester pass from Bialostok, and returned the ball to within 20 yards of the goal line. A few plays later, third-year kicker Karol Kurzydlowski nailed a 22-yard field goal to put the Maroons up 13–7.

Cortina passed for two more touchdowns in the fourth quarter, but Chicago only converted one of the extra points. “We still have lots of room for technique improvement across the board,” Wilkerson said.

To set up one of those touchdowns, the South Siders forced a fumble on a kickoff that gave them the ball back with excellent field position. Like the interception that ended with a Maroon field goal earlier in the game, Chicago capitalized on this turnover. Defensive coordinator Ernest Moore was very pleased with his team’s ability to take advantage of those opportunities.

“[We were] opportunistic in creating turnovers,” Moore said. “Our team plays hard and has been competitive in each of our games this season.”

In addition to aggressive defense, one of the things that distinguished the Maroons from Macalester was their consistency in third-down conversions. Chicago managed to convert nine third downs, while the Scots did so only twice.

Coming off of a homecoming victory, the Maroons are looking forward to their upcoming games. “We are excited about our next opportunity to compete as a team in our last non-conference game against the very good 5–1 Pacific University team,” Wilkerson said.

Chicago will kick off against Pacific University next Saturday at 1 p.m.