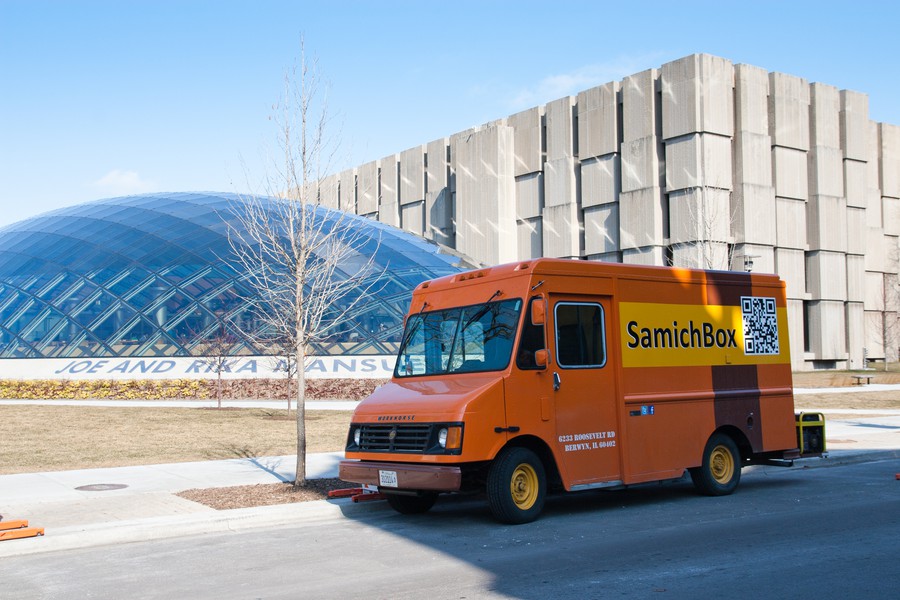 There are certain pillars of my week—things that, come hell or high water, are permanently etched into my schedule. I have quite a few of these, but none is quite as important to maintaining my sanity as the semiweekly food truck lunch. Twice a week I trek across the Midway to shop the culinary bazaar-on-wheels that pops up on Ellis between 11 a.m. and 1:30 p.m. on weekdays.

The food truck scene here is a quirky combination of the mom-and-pop shop and the foodie fad. Truck owners will often serve food and chat away with customers, a refreshing and disarming change from some nearby bureaucratic brick-and-mortars, but the business is still a tough one to succeed in. One week a truck is in, and the next it’s out. The product of this crazy market is a novel and homey culinary scene that is one of a kind for these parts, hence my obsessive semiweekly exploration.

Last November, the Maroon reviewed a few of these mobile purveyors of food, but it’s time for an update. The Ellis scene is constantly in flux: I can count at least six new trucks that have made appearances in Hyde Park over the past summer, and two of the trucks in that review are no longer common visitors to the area. Another reason to re-review this street of noms is to give those new to food trucking a place to start their adventures. In order to do the Ellis trucks justice here, I’ve opted to make a Top Three List (in no particular order) of the best food items at the newcomer trucks. There are countless more items to speak of—feel free to ask me, as long as you have an hour to kill—but hopefully this short, inexhaustive compilation will be enough to convince you to make the first jump, or at least to try something new.

1. The Eastman at Eastman Egg Company (sandwiches for $6–$8)

The Eastman Egg Company joins the small but slowly growing group of trucks that quietly sit on Ellis in the much less trafficked mornings. The exterior of the vehicle itself is highly unassuming, which makes it kind of easy to mistake for a UPS van. That is why I missed it the first time I attempted to eat here. However, spending some time scanning the street is worth the effort. There are only three basic sandwiches on the menu, of which one stands out.

The Eastman, the Company’s classic, sits on a lightly toasted English muffin and comes with several bold and familiar ingredients—cheese, egg, and ham—along with some more unusual additions—sweet chili sauce and cucumber. This sandwich is confusing; it straddles the border between the flavors one might anticipate in a breakfast sandwich and something completely different. If it weren’t for the fact that the two ingredients are so visibly prominent, it’d be hard to tell exactly what creates the nuance of flavors. The sandwich’s sweet chili sauce adds a heat that comes out of left field, but harmonizes with the much cooler and lighter pieces of crisp cucumber. The Eastman is an unassuming and bizarre sandwich, a pleasant jolt to the morning routine.

Husky Hog BBQ always makes me smile. This is a truck of personality more than anything else, driven both by its rambunctious owner, Joe, and by the great food being served. There’s little to no pretension at Husky Hog—but that said, it is also one of the most surprisingly flavorful food trucks regularly stopping on Ellis. Its barbecue is served through sliders, with a set number of sides included in the price.

There is a clear winner among the various slider contestants: the burnt ends slider. Cut from the smoked brisket, this hunk of meat is divinely rich. I’m not sure if it’s the extra smoker time or the char left behind from the long cooking process, but  just add some of Husky Hog’s Memphis barbecue sauce and the damningly delicious meat is ready to be wolfed down. As for sides, there are quite a few options worth considering, but I’d personally go for an item straight out of the deep fryer. Fried pickles or hush puppies take about three minutes to cook, at which point they are done to a golden-brown perfection that I greedily consume until there is nothing left to show. Just remember not to go overboard on the ordering. This food will fill you.

3. Carne Asada and Carnitas Tacos @ The Salsa Truck ($3 each)

I have a love-hate relationship with The Salsa Truck, but it’s a relationship worth describing, for the sake of others who come after me. The dirty little secret of this food truck is, and I’m sorry if you disagree, that the salsas are mediocre at best. And so are the chips they are served with. So the namesake of this business is actually not worth your time, which is comical and somewhat pitiful if you think about it.

Then again, the tacos here are surprisingly well put together. The carne asada taco, for instance, is a simple, unimposing creation of well seasoned, well cooked beef sitting on a bed of garnish and onions, maybe with a light dollop of salsa. The carnitas taco, too, shines from the same simplicity, allowing the pork to show its tender, juicy flavor while still letting the salsa have a supporting role in the dish. It baffles me still that a place with such tremendously ordinary salsa and chips can nevertheless make great, straightforward tacos, but that is the case. The Salsa Truck understands the taco—it knows it has to be fresh, and it knows that simple shines through better than any frills could. For understanding these two principles alone, I tip my hat to the little red truck with the average salsas.