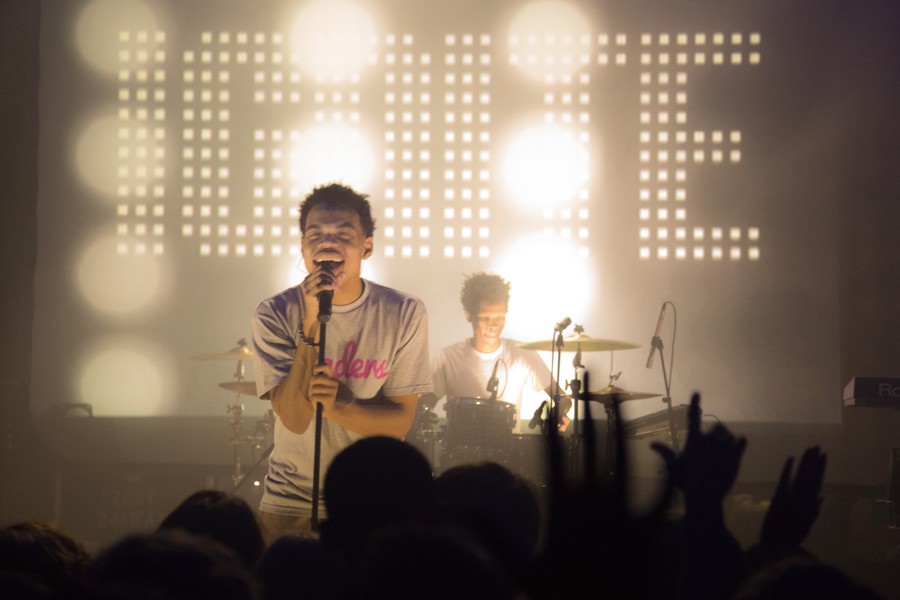 Chance the Rapper packed Mandel Hall Saturday night in the latest in a long string of sold-out shows in the Chicago native’s Social Experiment Tour. The buzz was significantly bigger for this show than for any other that the Major Activities Board (MAB) has put on since I’ve been on campus—the line was out the door of the Reynolds Club 30 minutes before the venue was even open. When tickets went on sale on October 23, they sold out after two hours.

It’s not at all surprising that students were so excited: Chance has had one hell of a year. He released his second mixtape, Acid Rap, for free on his website this April. Reception was overwhelmingly positive, and the release is bound to find itself on several “Best of 2013” lists next month. Since then, he’s been on tour nearly constantly, opening for Eminem, Kendrick Lamar, Mac Miller, and Macklemore. He made a stop back in Chicago in August for Lollapalooza, and it was so packed that fans were climbing trees and lampposts just to see the stage. He’s definitely a bit of a hometown hero—he grew up a few miles south of Hyde Park in Chatham, and much of the success of his first mixtape, 10 Day, came from his visits to local high schools.

U.K. electronic duo Bondax got things started a few minutes ahead of schedule, but the crowd didn’t seem to mind—Mandel was nearly at capacity from the beginning. Musically, the duo was impressive. Tracks “Giving it All” and “Renegade Master” (a Fatboy Slim remix) were highlights from the night, moving the whole room. Despite this, the stage presence of Adam Kaye and George Townsend left something to be desired. Rather than working next to each other, Kaye and Townsend took turns on the turntables, one of them always standing awkwardly behind the other as he waited for his next turn. Though I longed for a more comprehensive stage setup, the success of Bondax’s set despite these issues is a testament to the duo’s staying power.

Chance started the show out solo with “Good Ass Intro,” a track that plays off fellow Chicagoan Kanye West’s “Intro” from the 2006 mixtape Freshmen Adjustment Vol. 2. After quickly working through “Brain Cells,” and a verse each on “NaNa” and “Pusha Man,” Chance brought out a live band dubbed The Social Experiment. The Social Experiment consists of drummer Greg Landfair Jr., keyboardist Peter Cottontale, and former Kids These Days trumpet player Nico Segal.

The live band helped Chance to rework some of his tracks into the live space in surprising and compelling ways. “You Song,” a track from Lil Wayne’s Dedication 5 mixtape on which Chance is featured, was a standout in this regard. While the original features a slow funk beat, it was even more stripped down live, beginning with little more than a vocal loop and piano before Segal brought in a triumphant trumpet section to close the song.

The next song was a cover of Coldplay’s “Fix You,” which had Chance doing his best Chris Martin impression. As a whole, the show demonstrated the diverse set of roles that Chance has taken on during his short career: He’s a singer, rapper, energetic performer, hometown hero, and down-to-earth good guy, often all at the same time.

Along with his instrumentation, Chance’s stage setup was also much more elaborate than in the past; he brought an impressive light show along with him, as well as a set of artfully directed pornographic videos shot in black and white. The videos caused a bit of confusion in the audience, especially during “Lost” as Chance rapped, “Her pussy like me, her heart like fuck it,” in front of an extreme close-up of a vagina.

Crowd favorites “Juice” and “Cocoa Butter Kisses” featured energetic jumping and dancing (both on stage and in the audience), and the crowd was shouting every word, even more loudly than they had been earlier in the night. When Chance left the stage for an encore, a projection read, “Do you want to hear one more song?” Before long, the crowd was chanting his name, and Chance was describing a dream he had about Jay-Z being on stage at his concert as he himself made his way to the stage.

When Chance finally reappeared, he played a diverse encore, getting  started with “That’s Love (Interlude)” and “Cocoa Butter Kisses” before moving to “Everything’s Good (Good Ass Outro).” The triumphant “Chain Smoker” closed the night, serving as a kind of celebration of the insane trajectory that Chance has mounted in the past year.

Since I entered the College, the headliners at Summer Breeze have left me underwhelmed. It goes without saying: Chance was the most exciting artist MAB has booked in some time. Hopefully, MAB can build from this show, featuring artists that are just as captivating in the coming quarters. If this year’s fall show is any indication, we all have something to look forward to.