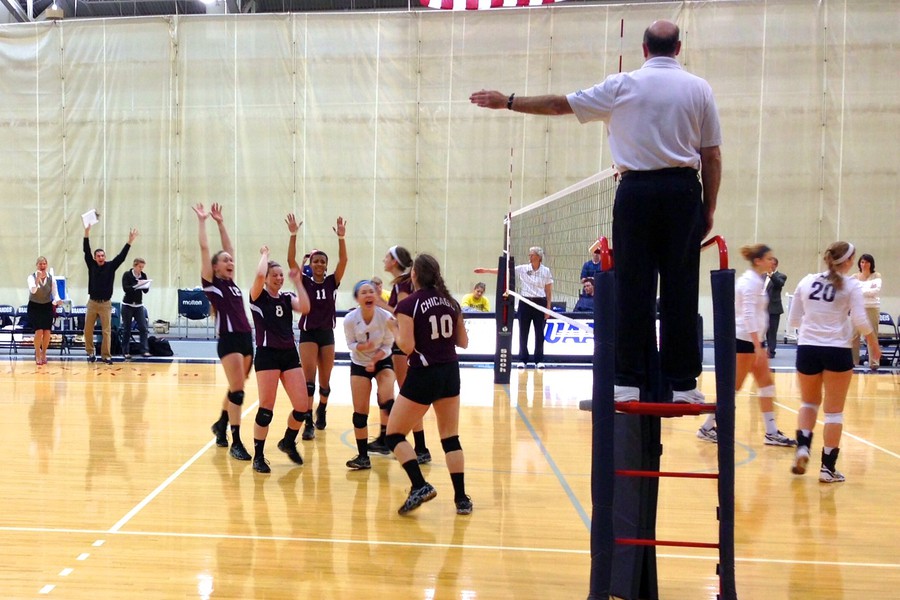 For the first time ever, the Maroons are UAA champions.

Chicago (26–10, 9–1 UAA) took Waltham, MA by storm this past weekend at the UAA Championship at Brandeis University. The No. 1–seeded squad began the tournament on Friday with a 3–1 victory over No. 8–seeded University of Rochester (9–27, 1–9 UAA).

The South Siders dominated the first two sets 25–19 and 25–14, but the Yellowjackets fought to win the third set 25–23. The Maroons, however, came back with a vengeance and finished the match in the fourth 25–13.

“I had confidence in everyone,” said second-year outside hitter Jasmine Mobley. “Everyone on this team is really good and we have the potential to win because this is what we have worked and trained for all season.”

All their training came to fruition on Saturday when the Maroons defeated No. 2–seeded Emory (30–4, 5–2 UAA) 3–1 for the UAA title for the first time in school history.

The Eagles came on strong, winning the first set 25–21, but the South Siders kept fighting. The second set was a fight to the death; Emory had three set points, but Chicago came back each time. A kill by second-year outside hitter Maren Loe tied the score at 26–26, then Mobley’s kill and an Emory attack error gave the set to Chicago 28–26.

Chicago took the third set 25–19 before the final set of conference championships. It was tied 17–17 when the Maroons made their move. Three kills from fourth-year Maggie Vaughn bumped the score to 21–18, and fourth-year Katie Huntington’s final kill won the match 25–21.

This win earned the South Siders an automatic bid to the postseason NCAA tournament, the fourth consecutive time the squad has reached the postseason. Announced Monday morning, the Maroons will travel to Grand Rapids, MI on Thursday to take on Buffalo State (25–9).

“Winning UAAs is beyond just the 15 players on the court,” Mobley said. “This is bigger; it affects the entire [University of Chicago] community.”

This is the first time a team other than Emory or Wash U has won the UAA title since 1988.

Alumnae who played volleyball for the Maroons from all years past are reaching out to the women on the squad, congratulating them. The South Siders just made history right before our eyes and the athletic community, past, present, and future, will honor their achievement for years to come.

The Maroons kick off their NCAA tournament run this week against Buffalo State on Thursday.