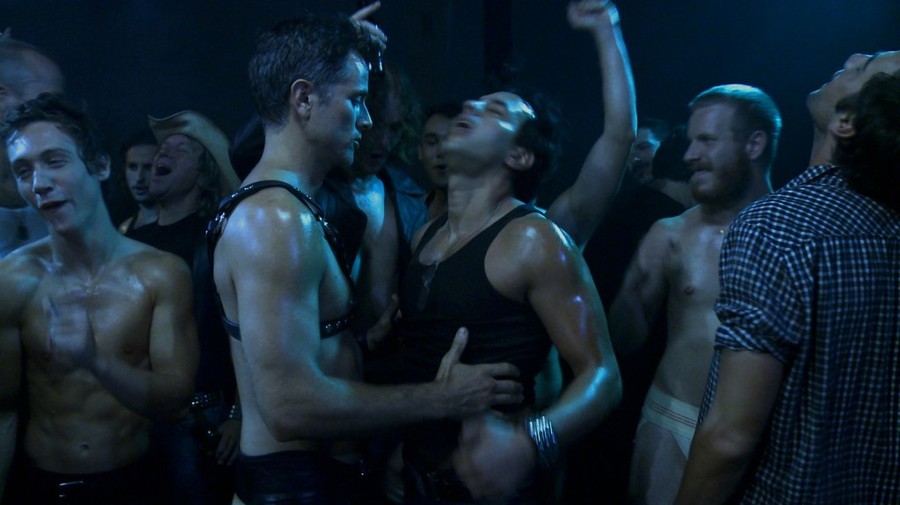 For the past week, there’s been another reason to trek to Logan Square besides the trendiest new fusion restaurant or coffee shop. Reeling: The Chicago LGBT International Film Festival took the Logan Theatre by storm from November 7–14 with 45 full-length films and over 50 shorts. Film lovers from across the city made a pilgrimage to the North Side theatre for their fill of quality film, libations, and convivial atmosphere.

Last Tuesday night, I found the Logan Theatre vibrating with energy. As filmgoers bounced between the bar and concession stand or just milled around waiting for the next screening, the one thing on the tip of everyone’s tongue was James Franco and Travis Mathews’s newest film, Interior. Leather Bar.

The theater for Interior. Leather Bar. was packed to the gills. Employees set up extra folding chairs in the back to accommodate more viewers, and even programming director Richard Knight, Jr. couldn’t resist making a joke about what might happen in the crowded theater once the lights went out. However, all was still when the lights dimmed and, after a few technical difficulties—including one fortuitous stroke of luck when the sound cut out entirely for the previews—Franco and Mathews got their hour on the screen.

Interior. Leather Bar. traces the duo’s attempt to re-envision the lost scenes from William Friedkin’s controversial 1980 film Cruising. Before production in the late ’70s, censors removed 40 minutes from the flick, which starred Al Pacino as an undercover New York City cop seeking out a murderer in the gay nightlife scene. Franco and Mathews focus their strange new film on the behind-the-scenes process of the re-creation as they find themselves questioning the role of sex and propriety in art.

It quickly becomes evident that the lost 40 minutes are more of a pretense than a focus for the film. What the film is about, if anything, is much less clear. As the cinematography switches between a steadicam documentary style (à la Franco) and a more polished art sensibility, the lines between fact and fiction rapidly blur. The film unfolds like a documentary, yet it is unclear how many of the behind-the-scenes moments are sincere and how many are staged. Some of Franco’s antics, including a moment when he tells actor Val Lauren to “just do kind of Pacino” and then later when he exclaims, “Scripts! Fuck scripts!” seem so over the top that they must be self-conscious.

Interior. Leather Bar. seems at times to be the pet project of a man with too many graduate degrees and too much money. The actors all seem to believe that Franco has some divine inspiration, or at least a point, behind the project, and rally around him in a way that forces two possible conclusions: Either L.A. actors are denser than expected, or the film is Franco’s version of an elaborate joke. However, just as the film seems to devolve into a Francofest, one gets the impression that Mathews’s strong influence is lurking just under the surface. For every hint that the film is just a pot-fueled joke, there is a scene or a shot that makes you realize it also has a few serious things to say.

In addition, both gay and straight actors were hired to film the scene, and it is obvious that this makes some uncomfortable. An actor at one point questions Franco’s motives—“Why is a straight dude touching this?”—while the straight lead, Val Lauren, vacillates back and forth between extreme doubt about the more explicit segments of the work and affirmations that as an actor he has no qualms against kissing a man.

Yet whether or not Val is truly comfortable with his role in the project, those around him, including his wife and friends, are vocal about their doubts. One male voice tells him over the phone to distance himself from “Franco’s faggot project.”

This tension drives the film forward, providing the most cohesive threads when it touches on the idea of taboo subjects in art, specifically the still-present taboo of straight people grappling with LGBTQ themes and vice versa. It is easy to ignore Franco and his smug grin while he shoots off statements against “limits on creativity,” yet the film itself renders these same themes unavoidable. Suffice it to say, no one left the theater in silence.