With an eye toward America, Art Institute holds feast

The Art Institute's new exhibit, which features an interesting Thanksgiving-themed gallery (and one too many fruit bowls), ultimately sustains an exploration of the American appetite. 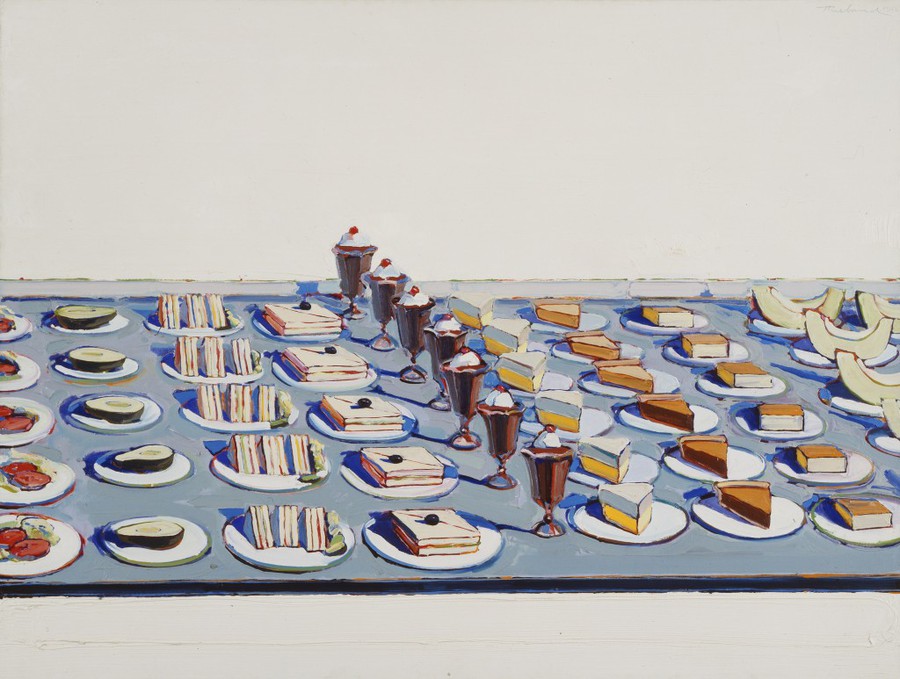 Wayne Thiebaud’s Salad, Sandwiches, and Dessert (1960) is part of the tasteful new exhibit.

Courtesy of the Sheldon Museum of Art / Wayne Thiebaud

The Art Institute of Chicago has a very strict no-food policy within its galleries, but, after a long day perusing them, it’s hard not to feel a bit famished. If this is the case, you may want to grab a snack before you head into the new exhibition Art and Appetite: American Painting, Culture, and Cuisine. From sumptuous depictions of peaches to cooks preparing juicy cuts of fish, Art and Appetite piques the mind and the stomach.

Upon entering the exhibit, one is greeted by Norman Rockwell’s famous depiction of the all-American Thanksgiving meal, “Freedom from Want.” Front and center sit the heads of the family, a couple who appears to embody Midwestern family values, as they display a succulent, brown turkey to their attending kin. On the surface it is opulent, with the matriarch of the family struggling under the weight of the bird. However, the painting was made during the early part of World War II, and it reflects the era: Despite the central focus of the turkey, the rest of the table is nearly bare, representing the rationing that a good American family would have been doing during the time.

Across the gallery, “Turkey,” by Roy Lichtenstein, presents a contrasting view on the same subject. “Turkey” features Lichtenstein’s typical pop-art style, utilizing Benday dots for shading and a bright, solid yellow for the turkey. Lichtenstein’s painting was supposedly inspired by an ad for a turkey that appeared in his local newspaper, and it does closely resemble newsprint as it sits flat and monochrome on the canvas. This stark contrast between the familial and the industrial provides an interesting introduction to the rest of the exhibition.

After the Thanksgiving gallery, most of the subsequent rooms are ordered according to artistic period as well as content. Beginning with still lifes by early American artists like Raphaelle Peale depicting various horticultural staples, the exhibition charts American history, eventually landing on modern representations of food seen in popular culture and the mass production of prepared food. The paintings that say the most about America’s relationship with its cuisine, such as Edward Hopper’s “Nighthawks,” Wayne Thibauld’s “Salads, Sandwiches, and Dessert,” and a piece from Andy Warhol’s series on Campbell Soup cans appear toward the end in the more modern section.

Unfortunately, an excessively large number of paintings in the early part of the exhibit depict bowls of fruit. While the fruit looks luscious, the paintings begin to lose their appeal after a few galleries of similarly-presented bunches of grapes and piles of game. The exhibition is most successful when it focuses on the people eating the food rather than on the food itself—one highlight is a room devoted to the popularity of picnics in the mid-1800s. All of the galleries couple the delicious pictures of food with an interesting look into both the artist’s inspirations regarding the painting and the changing relationship between the American public and food.

Art and Appetite: American Painting, Culture, and Cuisine will be on view at the Art Institute of Chicago through January 27.