For the Lyric Opera, Wagner’s Parsifal is Holy Grail 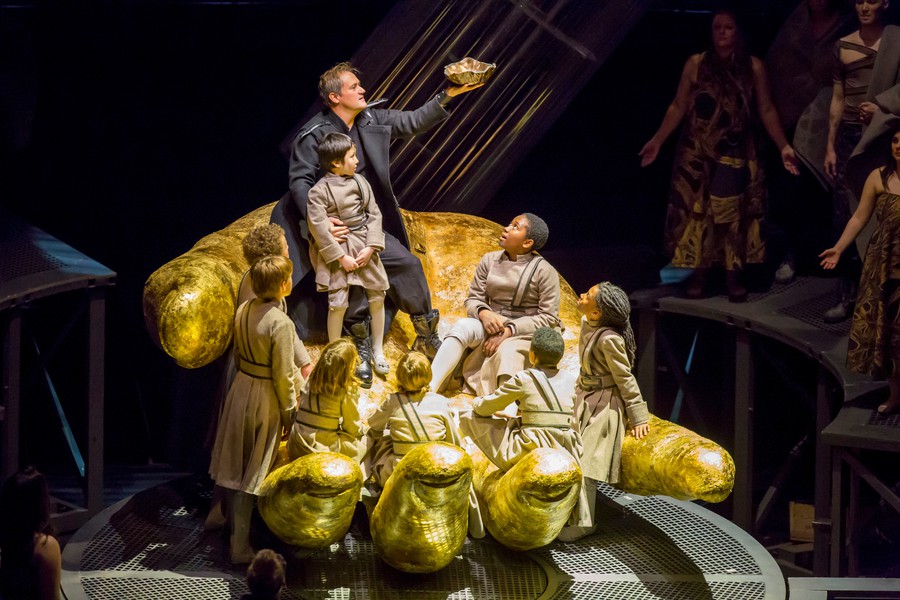 Wagner is difficult to appreciate: His operas are far too dense and much too long to be easily accessible. I don’t mean that the plot is a mess or that the music is inherently chaotic. It’s more Wagner’s own way of combining sound and story that makes everything so complicated. For one, there aren’t a lot of clear-cut, memorable tunes in Wagner operas: He emphasizes drama instead and embraces less conventional forms of expression. This makes for a complex, constantly shifting soundscape that’s unlike anything else out there. And Wagner expects you to follow all the clever things he’s doing—for five straight hours. Just sitting in the theater for five hours is exhausting, much less taking it all in.

But Wagner’s music is so brilliant precisely because it’s so challenging. His final opera, Parsifal, is a mesmerizing experience, and the Lyric Opera’s production is a masterpiece of both music and design.  The story follows Parsifal, a youth in feudal Spain who wanders one day into the realm of the Grail Knights. The Holy Spear has been stolen from the Order, and Amfortas, the King of the Order, bears a wound that will not heal from a failed quest. Intrigued by Parsifal’s innocence, the old knight Gurnemanz leads him to the Grail, but he does not understand its power and is sent away. The evil sorcerer Klingsor sends the witch Kundry to seduce the youth, threatened by his pure soul. Parsifal resists temptation and regains the Spear by the strength of his spirit, and a mature Parsifal returns to the Grail Knights in the opera’s powerful final act.

The whole thing takes place on a tremendous, visually arresting set designed by Johan Engels; the sheer power of the staging is most obvious in the second and third acts. The stage for Klingsor’s castle is bleak and barren, with ominous neon-red tubes of light fanning out from the center. When the sorcerer enchants a garden to delay Parsifal, the shift in scenery is extraordinary. As the flower-maidens sweep into view, a light, pearly-pastel cloth sheet billows out and covers the stage in soft color. The maidens wear long, free-flowing robes with sleeves that flutter as they move, making Parsifal seem lost in a storm of shimmering bodies and gossamer voices. Klingsor’s death seems all the more brutal by comparison. He rises up on a platform from under the stage, directly in front of the blood-red lights. All extinguish but the center beam, ripping through the sorcerer from head to foot.

Lyric cast the production brilliantly. Kwangchul Youn plays a grave, humble Gurnemanz. His voice is rich and paternal, and Youn brings some serious spirituality to the third act’s baptism scene. His deep bass notes resound powerfully over shimmering strings, creating a beautiful pastoral sound. Daveda Karanas’s Kundry is a weaker seductress but a sincere penitent. Her voice in the third act, shed of its darker elements after the second, is honest, devout, and lovely. Tenor Paul Groves shines as a mature, heroic Parsifal. Again, his character is strongest in the third act, weary but triumphant. His voice glows, especially in the Good Friday scene. Here, the melody of the Grail is heard in the orchestra, carried by the French horns. The music is simple, holy, and utterly sublime—one of the most beautiful moments in music.

Parsifal is chock-full of intense, spiritual moments, but the final image is by far the most powerful. Parsifal, standing in the palm of a golden hand, raises up the Holy Grail. The opera closes with the theme of the Grail. High above the stage, a white dove descends from Heaven.

Parsifal is playing at the Lyric Opera of Chicago through November 29.