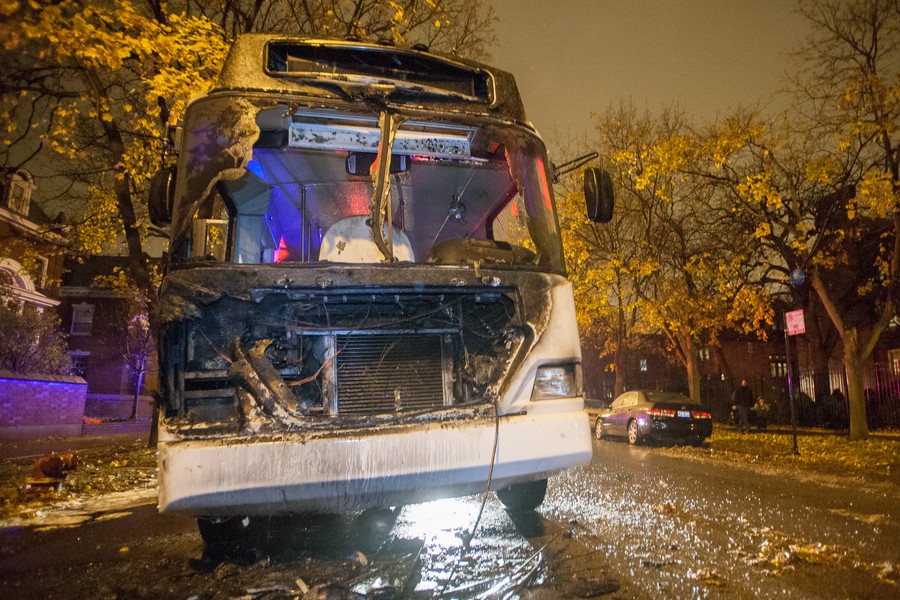 At approximately 5:15 p.m. on Thursday, a University shuttle bus caught on fire at the corner of East 55th Street and Woodlawn Avenue while waiting at a stoplight.

According to the UCPD officer that was first on scene, neither the bus driver nor the students that were on the bus, a Central shuttle, were injured or hospitalized. The officer, who declined to state his name, said that the fire “was put out within roughly 10 minutes.”

The officer said that the cause of the fire was still unknown.

First-year Miranda Wei was on the shuttle and said there were warning signs, but she didn’t notice anything extremely out of the ordinary until the shuttle reached 55th street.

“I think even when we were at Reynolds, it did smell kind of strange. But it’s UChicago—there’s construction everywhere—so I didn’t really consider it. By the time we got to 55th and we were stopped there, there was smoke coming out, and it was only from the front of the bus,” she said. “It got to the point where there was a column of smoke. It was clearly, ‘Something’s wrong.’”

Wei said that the fire started out small but quickly grew larger, until it “basically covered the entire front panel of the bus.”

The shuttle driver shepherded everyone off the bus when she noticed the column of smoke, Wei said. Wei said that the shuttle was full when it caught fire and estimated that 20 people were on it.

Anthony Griffin, who identified as the third UCPD officer on scene, said that the bus fire was highly unusual.

“In seven and a half years of service, I have never seen anything like this,” Griffin said.

University spokesperson Jeremy Manier said the bus fire is “the first one in [his] memories” and an isolated incident. Though the cause of fire is currently unknown, the shuttles’ vendor will inspect all other vehicles, according to Manier.