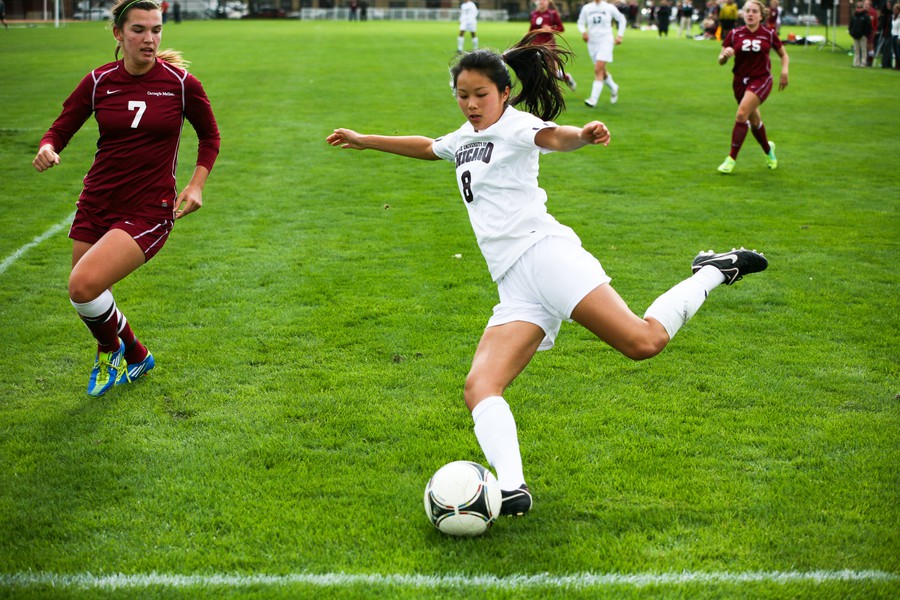 In an important stretch of conference play, the Maroons won one game and tied another to move ahead of No. 15 Carnegie and now have sole possession of third place in the UAA.

Although the Maroons had hoped to win both games this weekend, the four points they earned can be considered a success.

In Saturday’s game, both Chicago and NYU took a while to get their offenses up and running. Neither team could score in the first half, and each had limited opportunities. The Maroons had three shots for the entire 45 minutes, while the Violets had six.

Early in the second half, the Maroons’ offense finally got a good shot off and sunk it in the net to take the lead 1–0. Fourth-year forward Natalia Jovanovic scored in the 47th minute off a free kick, which marked her sixth goal of the year. Chicago kept up its offensive momentum with a second goal from third-year midfielder Sara Kwan just 15 minutes later, extending its lead to 2–0. Second-year forward Julia Ozello provided the assist. NYU answered with its own goal in the 78th minute but could not close the gap as Chicago won 2–1.

“Our team played hard during our NYU game and deserved the goals we scored,” said first-year midfielder Sophia Kim. “NYU had quick forwards and looked to spread our defense out to play their forwards through, but our defense stayed with them and shut them down.”

The Maroons’ second game on Sunday against Brandeis also started off slowly, with neither team getting on the scoreboard until the second half. Brandeis led in shots 7–1 in the first half, so the South Siders had to rely heavily on their defense to keep the game scoreless.

“Brandeis pressured the ball quickly and looked to play one- and two-touch,” Kim said. “They [played] long balls through to their forwards.”

Chicago broke through in the second half with a goal from leading scorer Kwan, who tallied her eighth goal of the season and her second of the weekend. Fourth-year midfielder Micaela Harms hit the crossbar with a shot, and Kwan scored off the rebound, giving the South Siders a 1–0 lead. Brandeis tied the game with a goal just nine minutes later, finding its offensive stride just as the Maroons found theirs.

Despite double overtime, neither team could score again, settling the game at a 1–1 draw.

In their final UAA game, the Maroons will take on No. 1 Wash U (16–1, 6–0) at home next Saturday on Senior Night. The game will help determine whether Chicago qualifies for the postseason, and the South Siders are ready to face their longtime rivals.

“This game will greatly influence our bid to the [NCAA] tournament, and it is senior night, so we are looking to come out and beat the No. 1 team in the nation at the moment and represent our seniors,” Kim said.

The Maroons conclude the regular season against Wash U at home this Saturday.