Beyond S.C.A.B., the student television station is scheduled to pilot a murder-based drama in the spring. 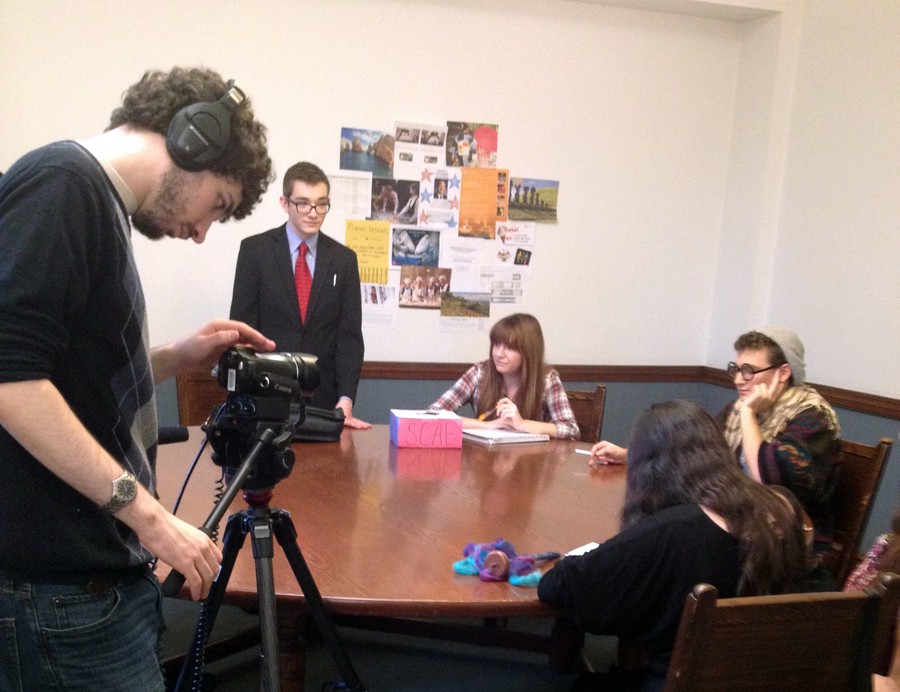 Last Saturday at Burton-Judson Courts, a group of actors and camera operators from MaroonTV filmed the pilot episode of S.C.A.B., a sitcom written, acted, and produced entirely by students.

S.C.A.B., which stands for the fictitious Student Committee on Advisory Boards, is the network’s first foray into original programming and will be followed by more programming later this year, according to fourth-year Philip Ehrenberg and third-year Maayan Olshan, the heads of post-production at Maroon TV.

Set to air on Maroon TV’s YouTube channel in one to three weeks, the pilot follows the eponymous student committee, dedicated to organizing the various advisory boards on campus.  The sitcom is scheduled to consist of six episodes, each spanning seven to 10 minutes.

“The idea behind S.C.A.B. is that every university in the country creates these advisory boards when problems come up….It’s a way that bureaucracies solve issues.  They create more bureaucracy,” said head writer and third-year Dan Cronin.

The committee is composed of a cast of eclectic characters, including a clueless first-year, an overachieving political opportunist, a guy brushing his teeth in the back of the room, and a muffin aficionado.

Although S.C.A.B. is the only original series in production now, there are proposals for a cooking show, a talk show with faculty, a political debate series, and a murder-based drama titled Ivy.  There have also been talks with improv comedy group Occam’s Razor about possibly televising student-made comedy sketches.  While most of these series are still nascent, the writing process has begun for Ivy and it is scheduled to air by spring quarter at the latest.

Previously, Maroon TV had been limited to news and sports broadcasting.  Since the advent of the original programming sector, the station’s staff has almost doubled in size and continues to grow.  Budgeting is not expected to be a problem, because the largest expense, the camera and film equipment, is all borrowed from the Logan Center for the Arts.

Currently, the Maroon TV YouTube channel has 35 subscribers and 8,390 total views, with individual videos having anywhere from a few dozen to a few hundred views.  Although Maroon TV will advertise its new programming, Ehrenberg said that viewership is not a pressing concern, because viewership will not determine whether or not the staff can keep producing content.

Olshan noted that the station is open to more shows.

“If there’s another group of people out there that wants to come in and write a sitcom and just wants to use our equipment and our resources, we’d be happy to just sign them on board.  We’re really non-exclusive right now….The bigger the better, in terms of the number of projects,” Olshan said.

When Maroon TV was created two years ago as an Uncommon Fund project, the founders intended to have original programming alongside the news and sports, even including it in the yearly budget.  But for various reasons, no project ever made it to the production stage until now.

“We’re a new organization….We want this to be solid and to have a long future ahead of it,” Olshan said.