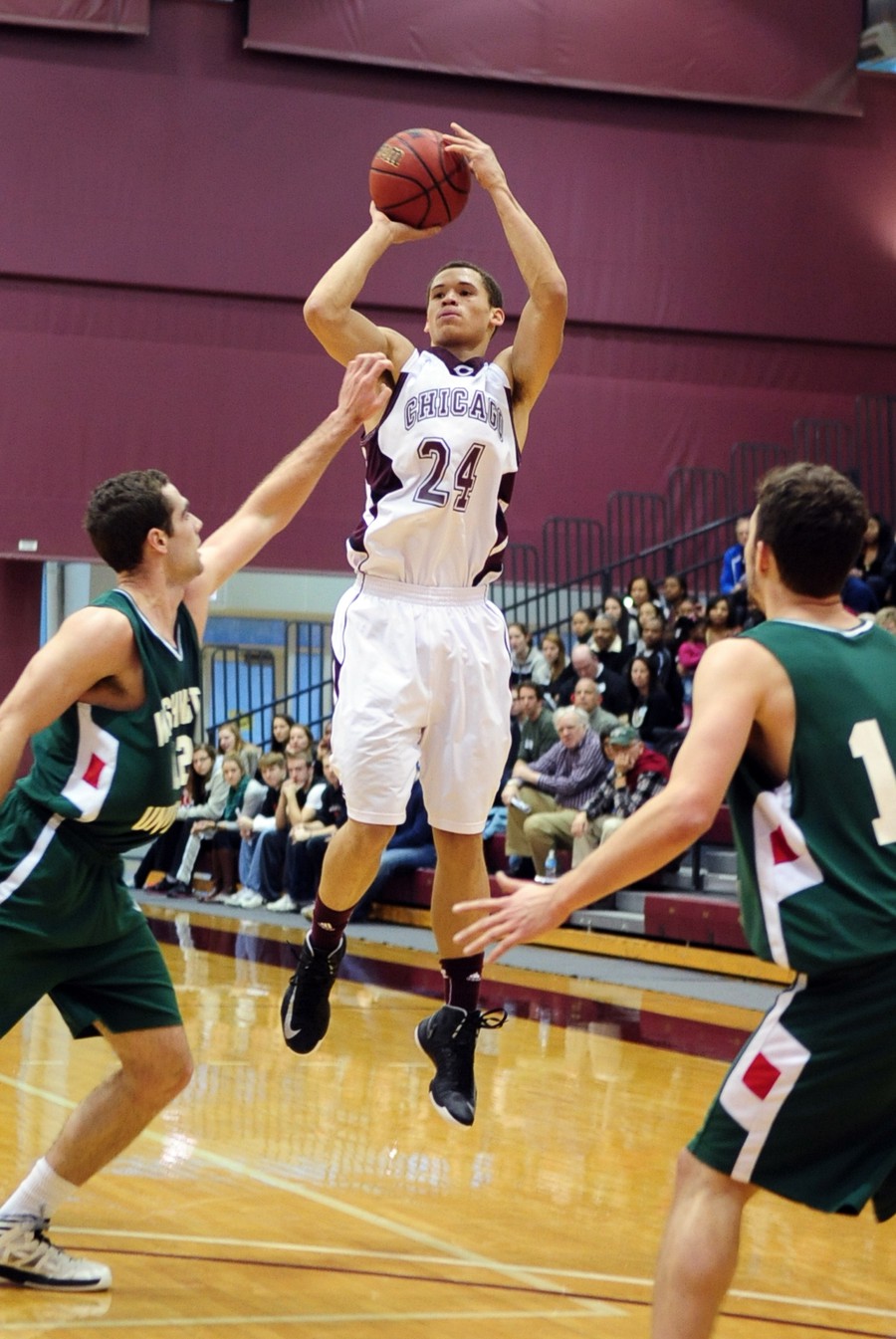 There is a high risk associated with shooting a lot of threes: You can “live or die” by the shot. This week, Chicago’s stayin’ alive.

As a team, Chicago shot 46.4 percent on three-pointers, taking 28 and making 13. Up until Tuesday, the South Siders averaged 7.5 makes per game on 17.75 attempts (42.3 percent). Against IIT, Chicago took more threes, made more, and increased its average.

On Sunday, the Maroons put their hot shooting to the test against a tougher foe, Kalamazoo (3–1), but they still came out victorious with a score of 100–83.

“I think we played well,” said fourth-year forward Sam Gage. “They hit some tough shots in the first half to keep it close, but we kept competing and were able to wear them down. We also moved the ball pretty well, which led to some wide-open three-point looks.”

Many of those wide-open looks came from third-year point guard Royce Muskeyvalley’s penetrating and kicking out to open shooters. Muskeyvalley tallied seven assists along with 10 points.

Chicago shot another impressive percentage from beyond the arc (43.8 percent) on 14/32 shooting. Second-year shooting guard Jordan Smith (15 points) went 5/7, and Hughes and Gage each converted on two long-range shots. Five other players also made a three-pointer apiece.

Hughes has emerged as a leader of the team and the top scorer, averaging 13.5 points per contest this season.

“I’ve just been trying to stay aggressive at both ends of the floor and make an impact however I can. I’m really trying to sit back and enjoy my last year of basketball, and I think as a result I’ve been more loose and relaxed, and my game has benefited from it,” Hughes said.

Fourth-year guard Derrick Davis finished with 14 points and four rebounds on the day and highlighted his performance with an emphatic dunk late in the second half that brought the crowd to its feet. Plays like that show how well the Maroons can play, but allowing opposing fourth-year shooting guard Mark Ghafari to score 29 points also showed that Chicago is not always able to focus on shutting someone down or playing a whole game.

“We need to keep working on sustaining our effort over the course of an entire game,” Hughes said. “We’ve had a number of lapses both offensively and defensively this year, and we need to work on eliminating those.”

Regardless, the Maroons are 4–2 and are averaging 87.5 points per game compared to their opponents’ 70.5. Gage thinks the team is ready for the rest of the season, which includes non-conference games against No. 14 Wheaton (December 4), Trinity (December 7), No. 7 Illinois Wesleyan (December 14), North Park (December 19), and Washington and Lee (January 4), followed by the UAA season. Their first opponent in the UAA, Wash U, is ranked fourth nationally.

“I’ve been happy with the way our season has gone in relation to preparing for UAAs,” Gage said. “We’ve played a pretty tough schedule against different types of teams whose styles are similar to those we’ll see in the UAA. Because of that, we’ve been able to identify weaknesses and address them now rather than during UAAs.”

Chicago plays at Wheaton this Wednesday at 7:30 p.m. and at home against Trinity on Saturday at 3 p.m.