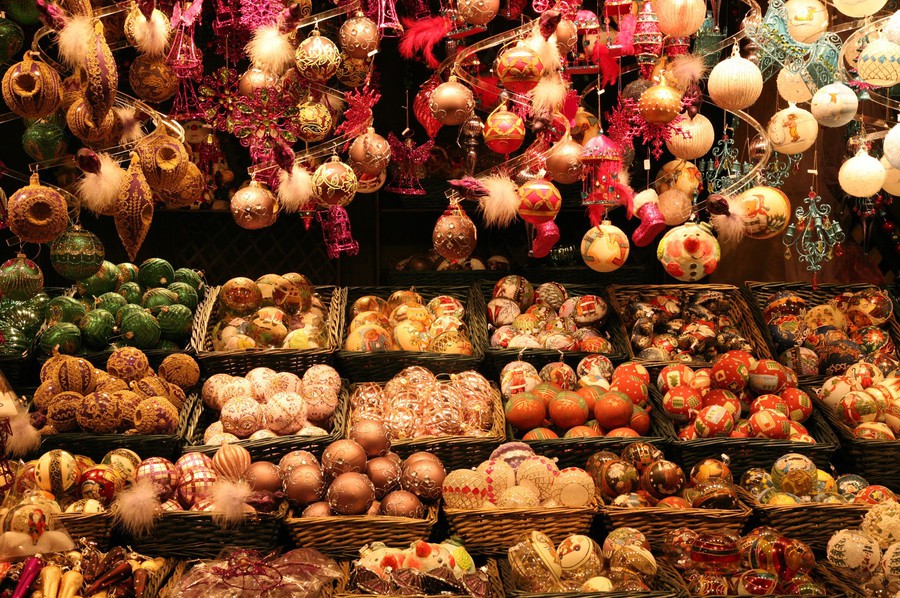 It’s December in Chicago, and for city dwellers, that means the beginning of the holiday season. The city’s Daley Plaza Christmas tree is up, lights illuminate the Magnificent Mile, holiday displays line State Street, and the Lincoln Park Zoo is attracting visitors with its multicolored lights. But for University of Chicago students, finals are in the offing. And while downtown the air is festive, things aren’t quite as merry for students in Hyde Park. A quarter’s end at the University comes with more hours at the library with study groups, and fewer hours roaming outside the neighborhood. The shift in priorities, aptly placed or not, can make enjoying Chicago during the holidays a challenge. With the few hours of free time that are left, how much holiday cheer can students absorb? As it turns out, quite a lot, especially when it’s paired with grabbing a bite to eat.

There is probably no better-known Christmas tradition than Christkindlmarket, a German holiday market that takes to Daley Plaza each year. Craft vendors set up shop to sell homemade knits, cuckoo clocks, jewelry, ornaments, and any number of other cottage-industry goods. Of course, it wouldn’t be a market without food. Potato pancakes with applesauce, German sausages with sauerkraut, roasted chestnuts, cookies, and gluhwein (spiced wine) can all be had for cheap. The open-air stalls make it easy to start with an entrée of potato pancakes, a salty snack balanced by the sweetness of the applesauce, and then jump to a bag of nuts that benefit from that same sweet-to-salty dance.

Those interested in seeing Chicago’s more out-of-the-way holiday markets may want to consider the Irish Christmas Festival at Montrose Green for local beers and bistro foods. And for the foodies looking to shop, buy a ticket to the Tasting Table Open Market, a fantastic display of Chicago’s best restaurants and food purveyors and all their wares, on Saturday, December 7. There will be demos from top chefs, including those from Fat Rice and Saigon Sisters.

Before the age of the super chef and even of fast food, department stores and hotels led the way in food service. In Chicago, the luxurious Palmer House hotel on State Street boasted culinary achievements—the brownie was invented there—and the Walnut Room at what was then Marshall Field’s (not Macy’s) pioneered the idea of shopping and eating in the same building. Perhaps one of the city’s best-kept secrets, both these venerable Chicago institutions are great places to celebrate the Christmas season, even in the present day.

The Walnut Room’s dining room, which stands over two stories high, is decorated every winter with a triumphant Christmas tree that dominates the space. Stick to the classic items: The chicken potpie recipe dates back more than 100 years and remains a highlight of the menu, and the French onion soup is respectable. The Palmer House decorates its already lavish interior with green and red lighting and other regal holiday décor. Have a cup of tea. Whatever you order, the ambiance of both institutions makes it all worthwhile. While the food isn’t truly impressive, the mix of early 1900s luxury and holiday cheer brings these two places to life.

At the beginning of the 20th century, Chicago’s Swedish population was larger than any city, outside of Stockholm. This is not the case today, but the influence of this influx of Swedes remains strong, particularly during Christmas season. The culinary gem of the Swedish holidays can be found at Tre Kronor, an Albany Park establishment known for its jülbord (Christmas table) feast. It’s a tradition going back more than a decade now, and it has achieved a cult following among locals in the area. Servers wear the traditional garb of Saint Lucia’s Day—a white dress with a crown of candles—as they move along with plates of reindeer meat, salted codfish, and ginger cookies. Prices are steep—$55 per head on the weekdays—but call and ask about half-price days earlier in the season. If you’re lucky enough to go, you won’t soon forget it.

Those looking for a cheaper way of experiencing the Swedish holiday cheer can look to the equally-enjoyable options available in Andersonville proper. Svea, a breakfast and lunch diner in the neighborhood, has been serving lutefisk as part of the holiday season for years now. The dish amounts to a gelatinous salted cod reconstructed after soaking in water and lye for two weeks, but it is a delicacy that seems to never go out of fashion with those in the in. You might even get the owner to sing to you while you try it. But if you’re too afraid, you can always turn to Swedish pancakes.