A new exhibit's main attraction is four gray canvases which serve to emphasize the nature of representation and the act of looking. 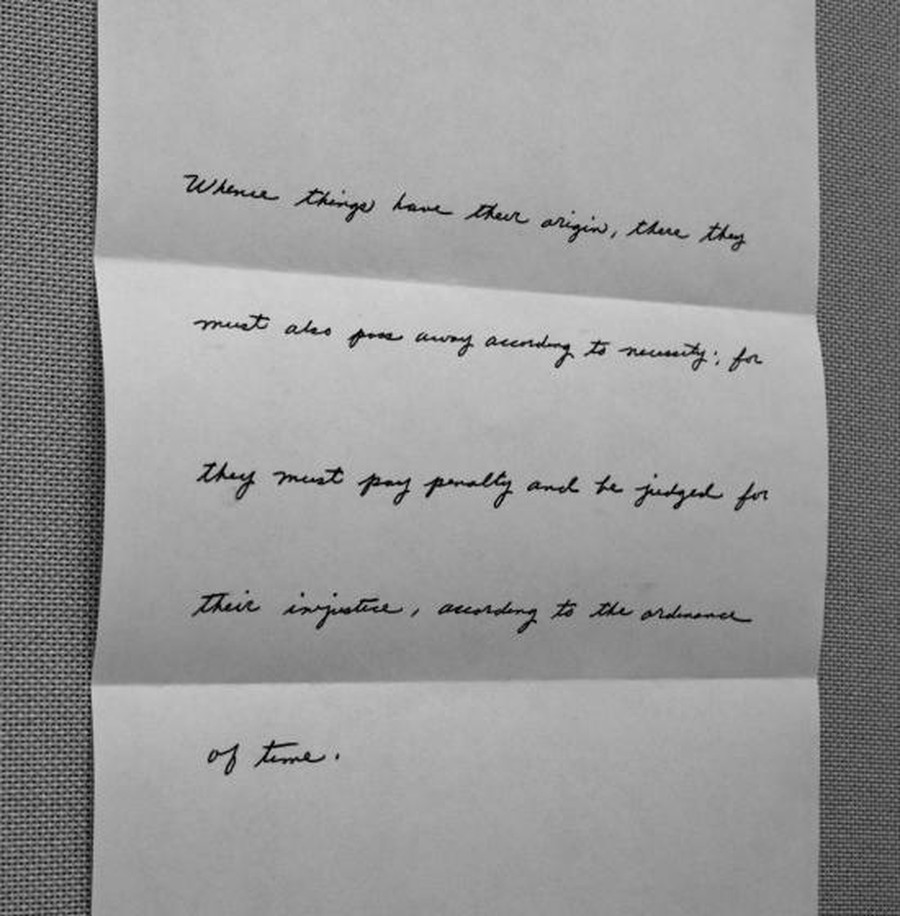 Remix to Rendition, hot and fresh off tradition: “Whence things have their origins...”

Courtesy of Logan Center for the Arts

David Schutter’s current exhibition at the Logan Center, Rendition, could not be more aptly titled. A “rendition,” simply put, is the act of making or interpreting. Upon entering the gallery, one sees an amply lit chamber on the left and a monolithic white cubicle jutting out on the right. Inside the chamber hangs a wood-framed drawing; inside the cubicle hang four oil paintings of grey-toned colors. These works are mostly abstract, but the title Rendition gives solid instructions for how the exhibit should be interpreted. You’ll likely get more out of the exhibition bearing the following in mind: The “rendering” itself is more important than that “something.”

The wood-framed drawing is a delectable appetizer for the show. It is the only representational work in this series; its subject matter is a painting viewed in three-quarter profile. This is as blatantly self-referential as a drawing can get. On one level, it references the act of viewing by mimicking what one would see upon walking into a gallery and catching sight of a painting. It is also a picture of a picture, making it an entirely self-conscious work. Schutter is so skilled at depicting the painting in a lifelike manner that the viewer may be tricked into believing that a real painting is encased in the frame—in this sense, the drawing functions as a trompe-l’oeil. Both aspects of the work—that it can call attention to its own condition of being seen, as well as its own physical being—can fall under the umbrella term “rendition.”

The four paintings that hang in the giant cubicle are even more cerebral. They tackle the theme of rendition by calling attention to the presence of the artist’s hand. Though widely different in size, they share the same color palette—predominantly dark grey, mixed with muted red, blue, and green. When viewed together, they also index a range of gestures: touch, brush, smudge, smear, and so on. The process of looking at the painting is also a process of constant guessing: How does Schutter achieve this kind of effect? The phantom presence of his hand’s touch on these paintings is acutely felt.

The same can be said about color. As murky and amorphous as the colors are, they have a kind of finicky, precise quality—one could imagine Schutter fretting over his color palette and laboring away to achieve the right mixture of pigment. His colors are often a hybrid of hues, masked beneath a veil of dirty grey, making them difficult to identify immediately. Curiously, they also wear a veneer of metallic sheen, appearing at once smoothly lustrous and grittily industrial. The color, again, points to the artist’s labor, if not his gesture.

The UChicago Arts online description of Rendition implies that one needs background knowledge to appreciate its essence. The exhibition is described as “exploring the contemporary life of historical painting.” It turns out that Schutter’s paintings are based on a collection by a 19th-century French landscape painter. Apparently, the crux of Schutter’s practice is “the encounter both bodily and cerebral with historical things whose allegories may have been lost with time, yet whose surfaces yield new problems and pleasures in equal measure.” Schutter’s discipline certainly returns to something in the historical paintings.

While the influence of historical paintings is prominent in the artist’s practice, it does not register as such to the viewer—not without outside knowledge of his subject. The paintings look painfully modernist, if not formalist. And I cannot help but wonder what we’re supposed to do with the knowledge that this series was heavily influenced by a 19th-century French landscape painter—whose name, for some mysterious reason, is left out of the introduction—and is more or less about historical painting.

Another issue lies in the design of the gallery space, into which someone clearly invested effort. The giant cubicle in the middle of one room that propels the viewer to walk around is a watered-down version of the wonderfully architectural Richard Avedon exhibition Murals and Portraits in the Gagosian Gallery this summer. A dozen plug sockets are exposed at the bottom of the wall, the floor is powdered with dusts, and the whole space has a makeshift quality. The cubicle, while it ingeniously serves as the big, white elephant in the room, does not have the benign air of a real elephant—it is unwelcoming, if not forbidding. This does not necessarily go along with the description of “that purposeful chamber engineered for contemplative looking” in the introduction—the light is too bright for contemplation, though good for scrutiny.

It is best simply to enjoy the paintings as they are. Schutter has already offered plenty of great things to look at in the works as they are, without further explanation.The title is more than sufficient to lead the viewer along a route of productive interpretations. After all, the exhibit is about rendition, not what’s being rendered.

Rendition will be open at the Reva and David Logan Center for the Arts through March 31.