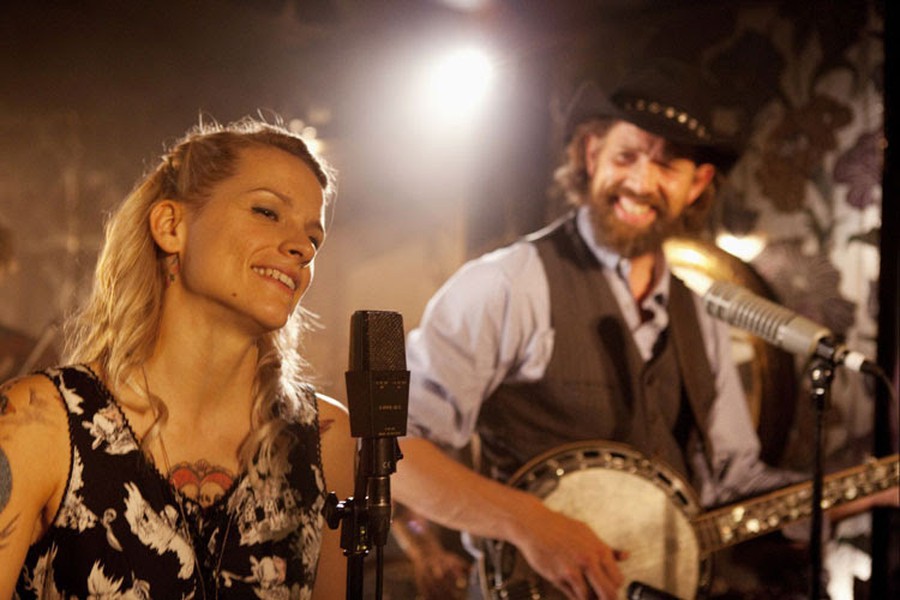 The Broken Circle Breakdown, directed by the Belgian Felix Van Groeningen and nominated for an Oscar in the best foreign film category, explores one of the scariest subjects for any parent: a child’s fatal sickness. The Broken Circle Breakdown, which is based on a play by Johan Heldenbergh and Mieke Dobbels and adapted by Van Groeningen and Carl Joos, is the story of love devastated by the trials of a child’s cancer.

The movie, which jumps chronologically, follows the story of bluegrass musician Didier (Heldenbergh) and tattoo artist Elise (Veerle Baetens) as they fall in love at first sight, and then become a family. The first scene is the painful moment in the hospital when their six-year-old daughter Maybelle (Nell Cattrysse) is first diagnosed with cancer. Although the beginning is so strikingly tragic, the scenes quickly switch to those in which Didier and Elise are just getting to know each other. Didier learns of the tattoos that adorn Elise’s body, evidence of lovers past, as she discovers his love for American culture.

Bluegrass music is a crucial part of the film, and the element that unites the couple in the first place. Upon meeting and falling in love with Didier, Elise joins his band. The moans of the slide guitar, deep male voices, and delicate string fingerpicking get a sweet country-esque addition in the form of Elise’s voice. As the movie goes on, the music accompanies both the happiest and saddest moments in the couple’s time together. When Maybelle first returns home from chemo treatment, Didier and Elise’s bluegrass band members greet her with song. All the songs are the original score of improvisational musician Bjorn Eriksson.

As the audience’s first exposure to the couple is during their greatest tragedy, the ensuing scenes of their love at its earliest stages (their first flirty encounter, the public marriage proposal, their wedding ceremony) all have a kind of bitter sweetness to them. The full awareness of the future pain this incredibly happy couple will soon have to face adds a layer of melancholy to even the film’s brightest moments.

Thankfully, these temporal hiccups are smoothly edited, avoiding any unnecessary confusion. When the bedridden, face-painted Maybelle gives a tigerish roar, Nico Leunen, the editor of the film, creates a sound bridge to the low growl of the pickup truck that starts the next scene set in the past. These scenes in the past, almost in direct contrast with those of the tragic present, are particularly picturesque. Van Groeningen offers a very naturalistic portrayal of the house that Didier builds, the location of most of the events in the film. He shows the chickens that roost on the bed of the pickup truck. Elise and Didier’s love is captured in equally beautiful scenes, such as a shot of them riding a horse naked, and one in which they take a shower outside, surrounded by creeping weeds and the setting sun.

The overall effect of the film is such that the audience finds itself worrying alongside the couple even in scenes of joy. The use of temporal discontinuity contrasts the almost unimaginable happiness of the couple and the extraordinary grief into which it inevitably transforms. Van Groeningen creates an additional layer of tension in this already worrisome subject by introducing the argument of science versus religion into the narrative. This move seems unnecessary, introduced for the sole purpose of creating friction between the two protagonists, for while Didier has abandoned any faith in religion, Elise remains spiritual. The scene in which Didier explodes about the paradox of pro-lifers being against stem research feels artificial, a forced detail that was added to emphasize the complexity of Elise and Didier’s relationship.

The Broken Circle Breakdown is indisputably a powerful and well-made film, but alongside competition such as The Great Beauty and The Hunt it seems weaker. The cinematography is beautiful, but still not as stunning as that in The Great Beauty. And while the story it seeks to tell is undeniably important, the couple’s tragic love story cannot match the gravity of the events in The Hunt. Nevertheless, The Broken Circle Breakdown, with its unique methods of storytelling and its great acting, remains a resonant, simple parable of love, loss, and music, and a strong contender for the Oscar in the foreign film category.