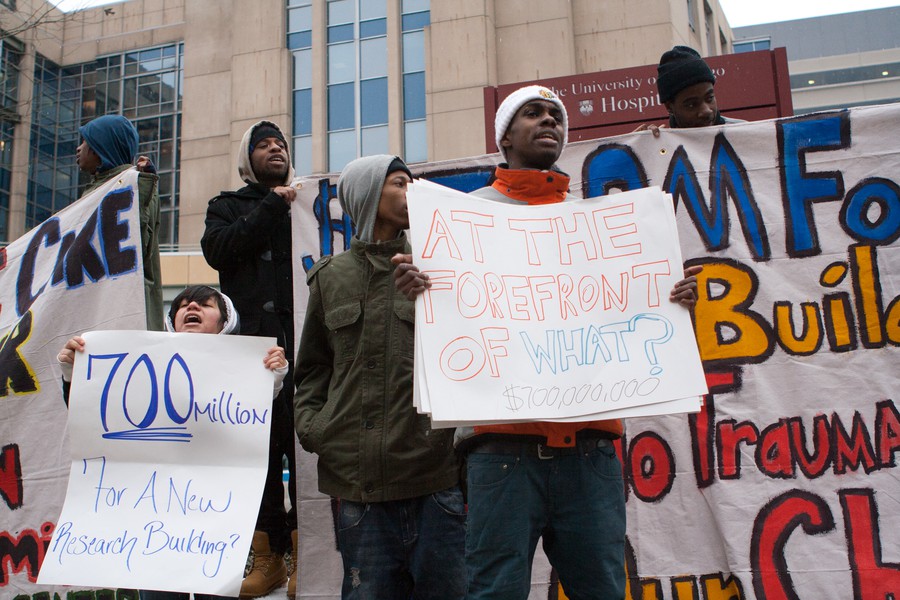 A committee created in response to last year’s trauma center demonstrations released a report of its findings on Tuesday, identifying problems in three key areas related to the University’s policies on dissent. The committee also recommended that the University improve students’ awareness of the policies and clarify procedures regarding disciplinary action.

Provost Thomas F. Rosenbaum established the seven-person Ad Hoc Committee on Protest & Dissent in winter 2013 after the controversy surrounding the University’s handling of two demonstrations protesting the lack of an adult trauma center at the University of Chicago Medical Center (UCMC)’s $700 million Center for Care and Discovery, which opened in February 2013.

The January 27, 2013 demonstration resulted in four protester arrests and allegations of misconduct against the University of Chicago Police Department (UCPD). The infiltration of an undercover UCPD detective at a second protest on February 23, 2013 led to an independent external investigation of the UCPD’s conduct.

The Provost charged the Committee with examining current University policies and developing recommendations to improve the handling of future protests and demonstrations.

In its review of the University’s existing policies on dissent and protest, the Committee applauded the flexibility that their general standards allowed for. According to the Committee, that the policies are less specific than those of peer institutions allows for the exercise of discretion in response to various situations.

When forming the Committee, Rosenbaum raised three key areas for investigation, and in its findings, the Committee concluded that each needed clarification. It wrote that the University should consider whether protests at “especially sensitive University facilities,” such as health and research facilities, should be treated differently than those in instructional or administrative buildings. It also highlighted the need to devise guidelines for protests and demonstrations that include both University affiliates and those unaffiliated and the need to clarify communications between protesters, University police, and University staff.

The Committee also provided six specific recommendations regarding the policies. These suggestions were mostly focused on improving channels of communication, providing students with a more explicit understanding of the policies, and clarifying University procedures regarding disciplinary action.

It also recommended ways to avoid tension and violence by advising minimum police involvement in protest-related activity while still maintaining the University’s right to enforce strict limits on protest activity that threatens the community, with the requirement that the University give protesters clear notice of these limits.

According to an additional report that specifically addressed the recommendations, the UCPD added additional positions last summer to oversee officers and implemented an order to strictly prohibit undercover operations. In August 2013, Campus and Student Life (CSL) also provided training on protest and dissent to all commissioned UCPD personnel.

The Board of Trustees is reviewing proposed changes to Statute 21 to better define what constitutes a disruptive act. CSL also convened a working group to examine communication of University policies on protest and dissent, which concluded that these policies should be discussed at RSO training, and is currently developing a workshop on free expression that will explain resources available to University members.

According to University spokesman Steve Kloehn, in selecting the Committee, Rosenbaum sought the expertise of “different academic disciplines and personal backgrounds.” In addition, the Committee received feedback from CSL, the UCPD, the UCMC, Patricia Brown Holmes, who headed the external investigation of the UCPD’s conduct during the protests, and students and community members who attended the Committee’s open meeting held last spring.