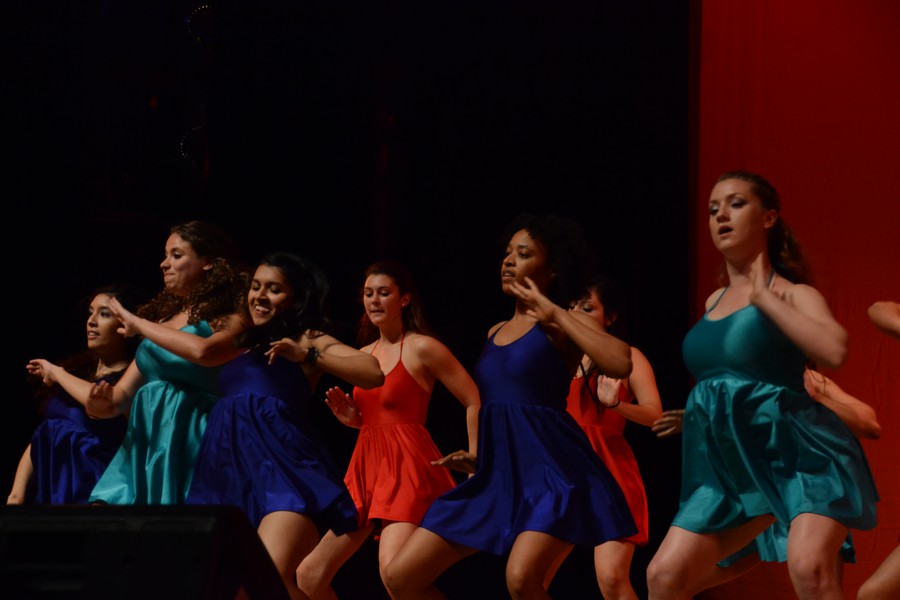 The large doors burst open. Into the buzzing swarm of prospective students tumbled four women clad in matching workout clothes, all dripping with sweat and yet not without a buzz of their own. These were just a few of the many dancers practicing rigorously in the stuffy grandeur of Mandel Hall last Thursday, from four to midnight, all in preparation for last Saturday’s annual OLAS Cultural Show. This year’s theme was Expresión.

OLAS, or the Organization of Latin American Students, is one of campus’s largest and most immediately present Latino RSOs. It’s comprised primarily of a board of twelve, led at present by three third-years: Christian Sanchez, and two interim directors (replacing others who’ve gone abroad), Cristina Ochoa and Joseline Gomez. Sanchez and Ochoa welcomed me with warmth at Thursday’s run-through, but only after I got to see them finish up rehearsal for just one of their many routines.

Backpacks, shoes, and laptops were scattered around Mandel, but OLAS was simply making itself known with a freedom that might look like carelessness to the untrained eye. Just like the fluidity of their performances belied the rigor that went into learning them, so this scene masked the carefulness with which Sanchez, Ochoa, and Gomez had been planning the show for a year.

“We started planning last spring,” Sanchez told me, still in her black performance dress. She, Ochoa, and I were parked on couches in the basement of Reynolds, above which practice and an RSO Fair thundered on (OLAS was tabling in the latter, of course.). “As soon as the old show finishes, a couple of weeks later we begin working on the new one.”

A lot of work for just one night of dancing, I thought. But of course, as I would see come Saturday, the OLAS show stands for so much more. While Sanchez and Ochoa had been involved in OLAS since their first year, they acknowledged its current model had only emerged recently. Composed of members from all years plus grad students, the OLAS board seeks to represent diversity on all scales. The show featured more than fifty dancers (OLAS members and nonmembers alike), in addition to three or four other UChicago groups and talents and a mariachi band from Northwestern.

“The whole point of OLAS is to show inclusiveness. It’s not representing any specific country either, for that matter,” Ochoa said.

“Latin America is huge. We try really hard every year to put together a diverse set of acts. And with that, we hope people learn how diverse our group is,” Sanchez said. As perhaps an interesting testament to this, I asked about the board itself: Ochoa identifies as half Puerto Rican, Sanchez as Mexican, and Gomez as Guatemalan.

“It’s a pretty diverse board. I don’t even think there are repeats,” Sanchez joked. “Some people who aren’t even Latino are on the board.”

That seems particularly important given OLAS’s position as one of campus’s most visible cultural enterprises. Minority representation should not strictly be a minority interest, a sentiment Ochoa and Sanchez echoed. Both also stressed the importance of other cultural events on campus, such as the South Asian Student Association’s cultural show, held the weekend previously, and the African and Caribbean Students Association’s show to be held the weekend after. These events work together to “remind the campus that there are all these different aspects that make up UChicago,” argued Sanchez.

Yet sometimes these “different aspects” are brought to attention in less celebratory ways. Following two particularly visible flare-ups last year, Latino identity came to the forefront of campus dialogue. The office of Campus and Student Life slapped together a shiny “diversity awareness campaign” in response, entitled RISE (for “Reflect. Intervene. Speak. Engage”). According to a University News release at the time, the RISE initiative aimed to represent “UChicago’s values of respect and free expression as a University community.” Regardless of its effectiveness, RISE was the product of a pool of resources from which any student could theoretically partake of in pursuit of sustaining campus dialogue in novel and visible ways. OLAS did just this, with intention.

“We have a right to express a culture, and we’re always so excited to do it. It’s my opportunity to express that right, and I think that’s political and powerful,” Sanchez said. “We’re given the opportunity and the funding and the space in Mandel, and we take it, and we exercise that and put work into it and express ourselves the way we want to express ourselves. And we make a representation, every year different, but every year we do it.”

“That’s powerful because as a minority in primarily white institutions, you might feel silenced, or not at home, or uncomfortable,” Sanchez added. “And this show is a complete burst of our culture. It’s not silent.”

And indeed, silent it was not. The OLAS show opened to a vivacious crowd on Saturday. Ochoa estimated ticket sales to be over 200, proceeds from which would go into funding the show next year. Within the crowd were members from all corners of the University and beyond. At least one local high school class was present. I asked one of the performers, third-year Inyse Bustillos, what her favorite part was. Her response? “Hearing the reactions that the audience had after the show,” Bustillos said. She performed two dances, Tribal and the Lambda Pi Chi Stroll. “So many people, both that I did and did not know, came up to commend me on my performance. That was great.”

Ochoa and Sanchez were back in their black dresses, for at least a number, and it was as though they’d been born in them. Red trains and lilac silk ties, high heels and spoken word, new age kicks and classic dips—it all fused together in a haze of energy and confidence. In a collusion of voices too often reduced to “sassy,” the OLAS show, and all of its constituent parts, took center stage with a heat and strength that felt as richly layered as Latin America itself.

“I’ve always had this idea of culture as a powerful, healthy, beautiful thing, that in rough times keeps me going,” Sanchez confessed to me, back in the basement, hours until curtains. “It keeps me going, that I have all these dances, all of this art.”

Ochoa agreed. “It’s a nice break, as ironic as that sounds, considering how much work it is.”