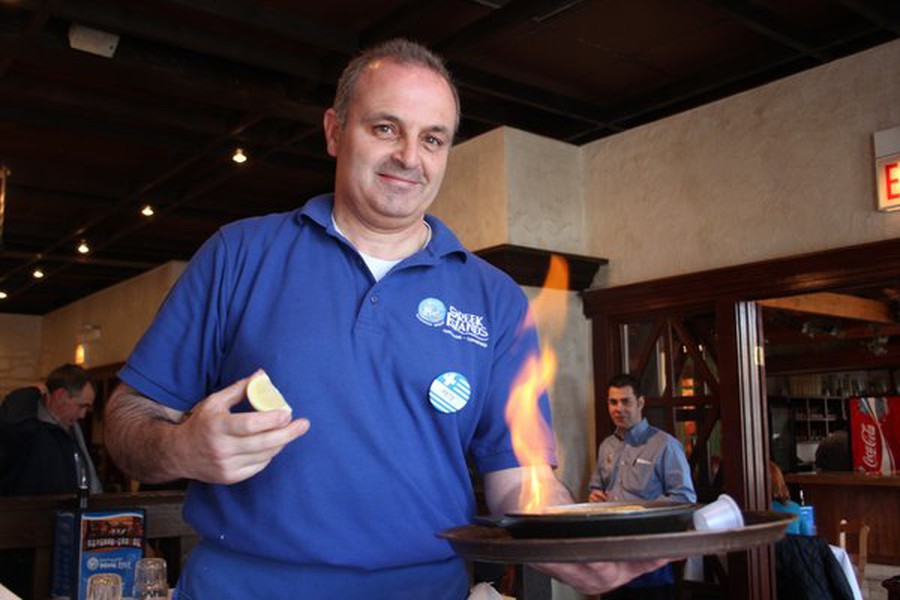 Just on the other side of Interstate 94, in the shadow of Willis Tower, is a small, five-block area known simply as Greektown. This hood backs up its appearance in the 2002 comedy My Big Fat Greek Wedding with a culinary wallop that could outshine a small city. Dive into this tucked-away enclave to convalesce from a night of keg stands and dubstep, free of H&M stores and that guy who was in your Hum class. But be careful on the way there: Blink and you’ll miss it.

Though the swanky Meli Café and Juice Bar on Halsted may seem like the perfect place to nurse your hangover and fill your bloated stomach with egg product, the best light breakfast or lunch in Greektown lies across the street in the Pan Hellenic Pastry Shop. The bakery serves up a wide variety of pastries in all shapes and sizes, along with a welcoming atmosphere and a steady stream of Greek pop music. You can’t go wrong with its bougatsa, a milk custard wrapped in phyllo, covered in powdered sugar and cinnamon, and served warm; and its Greek coffee—like a cross between Turkish coffee and espresso—is dark, rich, and muddy, with a hint of chocolate and sugar. Or, exactly what coffee should be. If you’re hankering for something savory, the spanakopita served with homemade Greek yogurt makes a great light breakfast or lunch, and only sets you back $3.95 per hulking slice. Still not convinced? This Greektown establishment (first opened in 1974) has a laid-back, homey vibe that can’t be beat anywhere outside of your own kitchen. The staff members chat in Greek and English with customers and old friends alike, and thanked us on the way out for sticking around and “hanging out” instead of grabbing our pastries and running.

Placed at the intersection of Interstates 94 and 290 at the southernmost end of Greektown, this beautiful modern museum is just minutes from the downtown bustle. The $8 student ticket will allow you entry into the rotating exhibitions, museum library, and rooftop terrace, but the architecture itself is worth the ticket price. The interior of the museum is a sparse glass, steel, and white-walled haven that feels miles away from the choked freeways a stone’s throw from the entrance. An exhibit on Greek street art is set to open this soon, and the museum offers free entry on March 29 and 30 in honor of Greek Independence Day.

The shops on Halsted in Greektown are a far cry from the crowded mega stores and tourist traps a few blocks east on Michigan Avenue. Wander into Athenian Candle Co. on the corner of Jackson and Halsted, and you’ll instantly see what I mean: The shop is crowded with a mishmash of mystical mementos, horoscopes, oils, and, of course, candles. To top it off, idols and religious icons, ranging from the Virgin Mary to large statues of the Buddha (competitively priced between $80–$100), fill the spaces in between. The store places an emphasis on products with bizarre side effects, including but not limited to the banishment of enemies, bad luck, and jinxes, and also stocks various substances that promise aphrodisiac qualities. In addition to candles, oils, and herbs, the shop boasts an impressive number of dream dictionaries, astrology guides, almanacs, and horoscopes. This Greektown legend, first opened by the Godelas family in 1922, is the perfect place to get your hippy fix or spend a pleasant hour or so browsing. Either way you leave smiling and smelling of patchouli.

There are few better places in Chicago, let alone Greektown, to end the day than the sprawling Greek Islands restaurant on Halsted and Adams. The restaurant, which claims to be the most popular Greek restaurant in America, is almost always packed, but given its complex maze of dining rooms and nooks, you’re likely to get a table even if you show up with five friends and no reservation on a Saturday evening (as I did this weekend). Despite the crowds, this joint is no sellout: It serves up amazing appetizers, seafood, and authentic Greek dishes in the bustling yet intimate dining rooms to strains of bouzouki music. The mood lighting and real fireplace don’t hurt either. Not to miss are the Mediterranean baby octopus, flaming saganaki cheese, and, well, everything else on the menu. A final plus? Almost all the entrées on the menu are under $20, and you can easily make a meal of the substantial small plates. Meaning you can get out around $15 and nosh on delicacies drenched in olive oil.