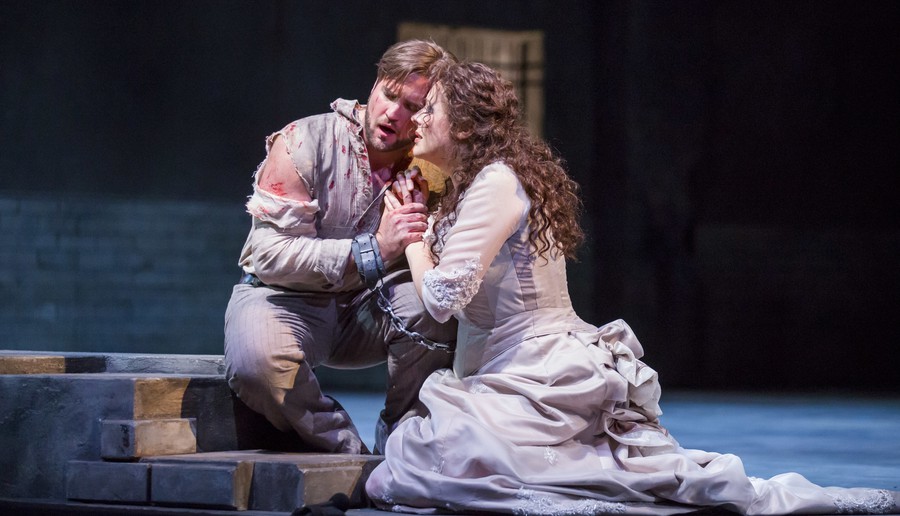 At the Civic Opera House this past Saturday, it was hard to tell which was the greater tragedy—Puccini’s melodrama Tosca or its new Lyric coproduction. A largely consistent, compelling vision did little to assuage musical disaster. Static orchestral direction exacerbated the soloists’ vocal difficulties, contributing to a dramatically unsatisfying performance.

Tosca is a drama involving three characters: Cavaradossi (Brian Jagde), a revolutionary painter; Floria Tosca (Tatiana Serjan), his fiercely jealous lover; and Baron Scarpia (Evgeny Nikitin), the lustful chief of police. The escape of a political prisoner sparks a conflict between Rome’s establishment and republican forces aligned with Napoleon, with Cavaradossi and Tosca caught in the crossfire. With her lover’s life at stake, Tosca must decide what she is prepared to sacrifice for happiness.

Puccini’s operas revolve around their leading ladies, and Tosca is no exception. The Puccinian heroine is a (dated, but nevertheless dramatically effective) feminine ideal: passionate and naïve, living and dying by love. Among them, Floria Tosca is an outlier: She is jealous, headstrong, and driven. Nor does she seem a particularly doting lover, so devoutly Christian she refuses to kiss Cavaradossi in front of the Madonna. Therein lies her character development. As the plot of the opera unfolds, circumstances force her to turn from religion to love. Her famous second-act aria, “Vissi d’arte,” expresses her despair toward an indifferent God. Ultimately, Tosca the role makes or breaks Tosca the opera—high stakes for the prima donna.

That said, Tatiana Serjan’s Tosca was literally laughable, her jealousy in the first act provoking chuckles from the audience. Serjan lacked the gravitas to make her suffering convincing: Her vocal performance fueled further disappointment, pairing a warm middle with an upper register thirstier than a straight white boy on Tinder. The metallic bite in her high notes sounded especially grating in the second act, given its stratospheric tessitura. Like Tosca’s deadly fall in the finale, Serjan falls short of good Puccini.

Her male counterparts fared no better in attempting to realize their characters. The drama in their roles depends on interactions with Tosca; the lack of a captivating, commanding prima donna reduces their impact. Evgeny Nikitin’s Scarpia felt more bored than menacing, somehow managing to dampen his baritone to a bagpipe-like drone. However, Brian Jagde as Cavaradossi proved the lone vocal success; his virile, powerful tenor directed positive attention to an otherwise soupy soundscape.

Director John Caird’s vision for Tosca is one of a “darker and more brutal world” than more traditional, ornate treatments. His aesthetic aims to make the struggle between revolutionary and reactionary forces—embodied by Cavaradossi and Scarpia, respectively—central to the opera’s plot. The brooding, warehouse-like sets by designer Bunny Christie succeed at creating a brutalist-establishmentarian-edifice vibe, looking very much like the exterior of the Reg. However, Caird’s myriad theatrical flourishes are less straightforward than painfully obvious. We know from both the text and music that Tosca’s faith wavers in the face of Scarpia’s oppression—do we really need a “child Madonna spirit character” beating that dead horse? Do we really need a dummy corpse hanging from the ceiling, spinning like a morbid pinwheel, to remind us that everyone dies in the end? Not even the lighting escapes Caird’s aggressive kitsch. I knew exactly when Tosca felt vulnerable because the lights dimmed and turned a particularly drowned shade of blue. Please, that’s Broadway bull.

Caird’s overzealous symbolism was orders of magnitude more forgivable than conductor Dmitri Jurowski’s catastrophic interpretation of the score. Under his baton the Lyric orchestra sounded brutish and monolithic, a far cry from the voluptuousness associated with Puccini. His most violent opera, Tosca certainly has a sound to match its substance: powerful low strings and brass, bolstered by militaristic percussion. Yet it also has moments of extraordinary tenderness—Tosca’s devastating “Vissi d’arte” in Act Two comes to mind—when the orchestra fades to a mere thread of sound. Balancing the two extremes takes a sensitivity of interpretation that Jurowski does not possess. This distended lower register proved problematic for the opera’s calmer moments, creating a vacuum in Puccini’s more delicate scoring, which sounded empty by comparison. Moreover, Jurowski demonstrated total unawareness of good dramatic pacing, equating sluggishness with tension. His rubato at key points was more liberal than Cambridge, Massachusetts—paint dried faster than the last measure of the “Te Deum.”

Puccini’s Tosca is a Lyric calling card. A list of past casts reads like a who’s who of great opera greats: Renata Tebaldi, Sherrill Milnes, and Tito Gobbi, just to name a few. Saturday’s production was unworthy of succeeding their stage.

An operatic Simone Biles, Shagimuratova delivered on the floor in Olympic fashion—equal parts art and power.