UT's Krapp's Last Tape explores one man and his past recordings 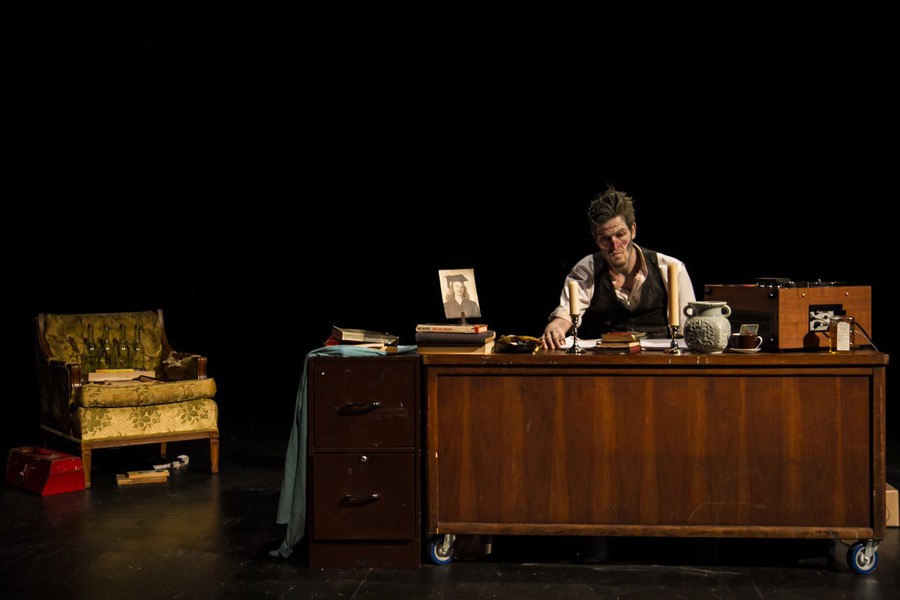 We are used to seeing “Grumpy Old Man” presented as a TV trope: an enemy to youth, bitter, and occasionally profane. Just last Friday, followers of the Facebook group Overheard at UChicago enjoyed a post about a one-armed old man who flipped off an impatient driver as he got out of a cab.

This is the side of the story we are used to seeing, and we react with a combination of pity and amusement. Then, to comfort ourselves, we imagine him like Mr. Fredricksen from Up, a man whose life has simply lost its source of happiness.

However, Krapp, from Samuel Beckett’s play Krapp’s Last Tape, performed last weekend by the University Theater, is not Mr. Fredricksen. Krapp, perhaps like the one-armed man in the cab, is not to be romanticized.

The play begins conventionally enough, eliciting pity and amusement through Krapp’s antics. Krapp, played by third-year Atticus Ballesteros, spends the first 10 minutes of the play making faces, banging his toes on drawers, tripping dramatically, and entertaining himself with bananas. He acts the fool, amusing us with his pain, paining us with the silliness of his amusements.

Director Jonathan Sorce found Beckett’s slapstick-heavy stage directions daunting to bring to life: “He slips on a banana peel! How can I make that funny?” After bringing on Alex Hearn as an official clown coach to teach Ballesteros to pull off physical comedy with very little aid from dialogue, Ballesteros managed to make the crowd laugh alongside him.

Sorce realized that Beckett added this clownery “to make Krapp likeable;” to make the audience empathize with and relate to this old man who makes dick jokes with bananas, gives the finger to his neighbors, and laughs with us at the ridiculousness of him slipping on a banana peel.

Then the tape recorder begins, and the clownish façade starts to fade. We see a man, all alone, listening to a voice recording he made 30 years before. We are not given a story of a long happy life coming to a close too soon. Rather, we watch a sad 69-year-old man listen to his 39-year-old self give up on life. We see his ragged clothes and bloodshot eyes, and we know he has been suffering in static joylessness ever since.

Sorce explains that the play’s emotion comes from seeing “someone at the end of his life who’s struggling with his own mortality and his own purpose…[someone] beat to shreds by life.” With this in mind, rather than try to make the 21-year-old Ballesteros look old, Sorce and costume designer Emma Heras decided to “make him look grotesque, beat-up, and worn-down.” It was the dusty filth that covered his wrinkled skin and grey hair and the skeletal appearance of his hands and sunken eyes that transformed audience sympathy into morbid curiosity.

Appearances aside, any 21-year-old actor would find it challenging to capture the nuanced emotion of a 69-year-old man. However, Ballesteros gave a moving performance. Alone on stage, with no other actor to build off, he kept the audience entranced, intently watching his reactions to the voice on the tape.

But the audience was not allowed to stay in the comfort of this trance. In a moment of frustration and weakness, Krapp sets the tape to rewind and disappears behind the curtain, leaving the stage empty. The audience listens as a man gulps down whiskey backstage and a tape recorder spins faster and faster and faster, confronting the audience with the fleeting fragility of life.

The play ends with the tape recording of Krapp’s former self stubbornly proclaiming that even though his best days are over, he wouldn’t want them back. The old Krapp moans in pain at the foolishness of this statement. He collapses on the desk, pining for his wasted life and his lost opportunities for happiness, letting the blank tape play on.