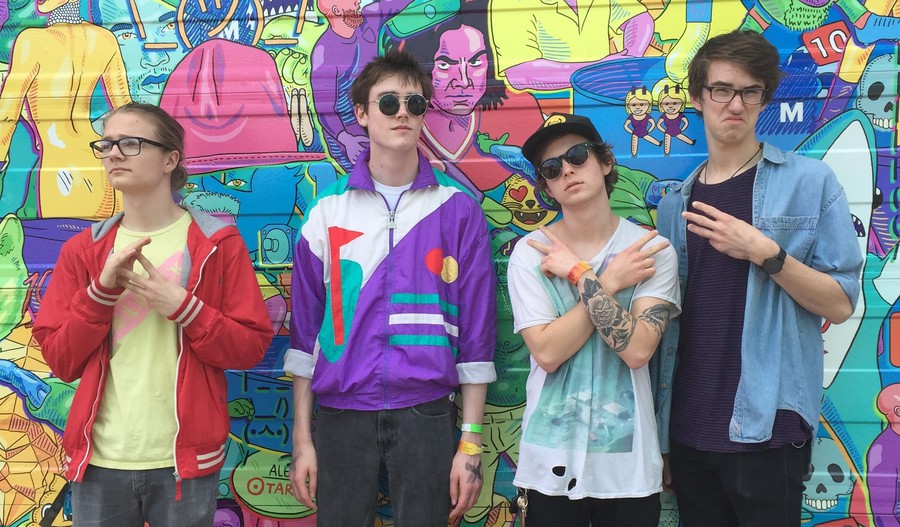 Look, I’ll come clean. I went to see Hippo Campus at Subterranean, a venue in Wicker Park, because they’ve name-dropped the English band Wu Lyf in every interview they’ve ever done.

Wu Lyf broke up in 2012 after releasing a single album, Go Tell Fire to the Mountain. They were known for three things: making a great fuckin’ album, being mysterious (at certain points, they refused to talk to press), and being culty (Wu Lyf stands for World Unite! Lucifer Youth Foundation). They called their sound “heavy pop,” and heavy it was: Although their clear, full-bodied guitar tone was the most immediately recognizable element of Wu Lyf’s music, there was aggression in front man Ellery James Roberts’ craggy howl and in the way drummer Joe Manning beat the shit out of his kit.

I saw potential in Hippo Campus’ repeated Wu Lyf citations. Wu Lyf isn’t a common influence, especially not for bands from Minneapolis. It seemed to me that there were ways a band of Wu Lyf fans could take Wu Lyf’s sound and run with it, even improve it; Wu Lyf were at their worst when they underutilized Manning, choosing instead to meanderingly indulge in artistic pretensions.

So I went to the show.

Hippo Campus bounded on stage at 11 p.m. I’d never seen four more gorgeous people on stage, and I’d never seen a grin bigger than the one front man Jake Luppen was wearing. That’s when I put the pieces together, or so I thought—no matter how often they’d talked an interviewer’s ear off about Roberts and Wu Lyf, Hippo Campus clearly didn’t want to share Wu Lyf’s fate. They didn’t want to be heavy pop. They wanted to be pop.

The problem with their pop was that it was schmaltzy, especially their online hit “Suicide Saturday.” Hippo Campus combined Killers-esque I’m-a-teenager-in-the-heartland lyrics with Walk the Moon-esque rimshots and boom-bash drum beats.

I stayed, though. Guitarist Nathan Stocker captured the classic Wu Lyf guitar tone with astonishing accuracy by using six or seven pedals. And all of the members of Hippo Campus were dauntingly good musicians. Every single person on stage could sing. Both Stocker and bass player Zach Sutton were ridiculously nimble—Sutton’s fingers were flying up and down a five-string bass.

When Hippo Campus finally cut loose from Verse Chorus Verse Chorus Bridge Verse Chorus, they became what I’d hoped they’d be. “Souls” tightened Wu Lyf harmonies into a four-minute power-pop song. The encore, “The Halocline,” was even better: Stocker plucked a haunting riff, and Luppen’s repeated lyrics “This is my home/ This is my only way” were simple enough to mean something different to everyone. About four minutes in, drummer Whistler Allen started pounding on his bass drum, the three guitarists’ arms crashed down in powerful unison, Luppen started wailing, and the energy they’d demonstrated all night long culminated in a sound worthy of Wu Lyf. Then the sound ceased. Stocker straightened up and gently repeated the opening riff.

For two glorious minutes, Hippo Campus had played their own version of heavy pop. It might have even put Wu Lyf to shame.