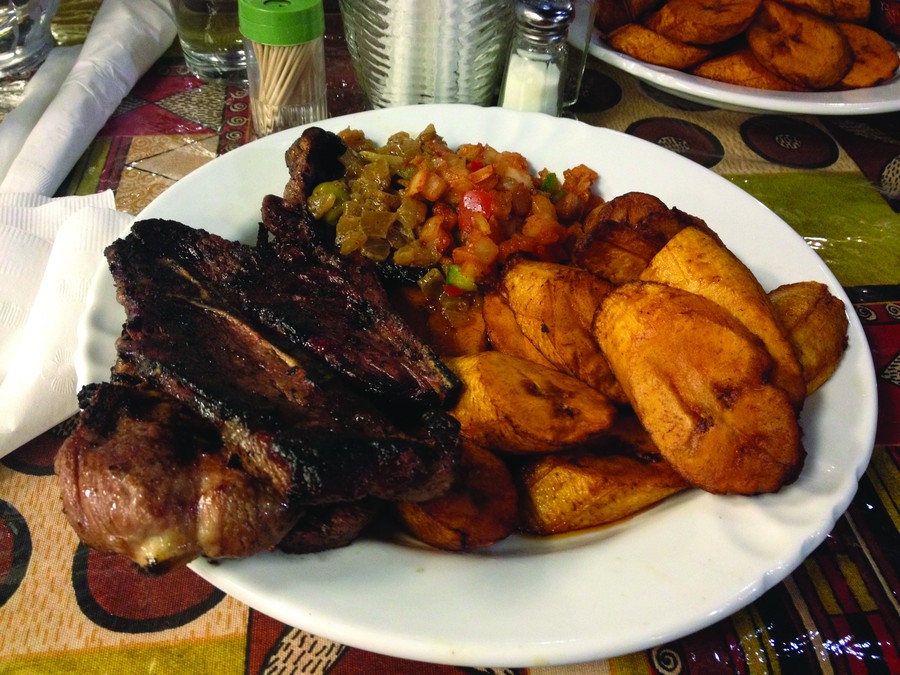 My idea of a perfect Saturday night is sitting on a sidewalk with a bucket of cheap takeout, growling at anyone who comes too close to my food supply. No utensils, and certainly no remorse. Unfortunately, I have learned the hard way that this tried and true survival tactic tends to be unappealing to women, or frankly, to other people in general.

So, this weekend I decided to class it up a notch with a trip to Bronzeville for an experience with Senegalese cuisine at a real sit-down restaurant. Besides, sometimes you just need a fistful of plantains to end a day which would have otherwise been totally mediocre.

At 3501 South King Drive, Yassa African Restaurant is a straight shot on the northbound #4 bus. Upon entering the place, I was immediately impressed by the decor, which includes, but is not limited to, giant wood carvings, canvas-size rugs depicting Senegalese agricultural life, and a quilted world map embossed with Obama’s mug. To complement the furnishings, the maître d’ had Afro-French dance music going at full blast, which was surprisingly easy to bump to. All told, it is a lively atmosphere that draws a mostly full house even at 5:30 p.m., which, while not a guarantor of good food, is always promising.

The menu is largely meat-centric, and filets or kebabs of fish, lamb, beef, and chicken are prominent. The man at the table next to me asked the waiter for the house’s vegetarian options and received a hearty chuckle in response.

For a representative sampling of of Yassa’s offerings, I went with the grilled fish and chicken kebab entrées, with sides of couscous and plantains, and had some lamb thrown in there for good measure. All of this ran a pre-tip $30.

As an aside, small portion sizes at restaurants have always vexed me. When Burger King ran the “I am Man” series of advertisements in the late 2000s, which lampooned sit-down dinner options as insubstantial and effete in comparison to The Whopper, I was put off by the blatant sexism. I did, however, see their argument about most restaurants as failing to deliver a solid stomachful on the dollar.

Yassa, in contrast, does not serve small. The back of the menu, which details the personal immigration stories of the proprietors, Madieye and Awa Gueye, also mentions that the restaurateurs honor their heritage as members of the Wolof tribe of Senegal by “[living] up to their legacy of generosity with the size of the portions they serve.” I would soon learn that they were not fucking around.

When the fish arrived, I was ecstatic as I was presented with a whole de-scaled tilapia, which was about a pound of food by itself. The kebabs and sides were similarly massive; both entrees also blessed with a savory onion-and-olive-based garnish. More importantly, all of the food was excellent, and was only differentiable in quality by degrees of excellence, which ranged from “excellent” to “Godly.” The kebabs were juicy and well-spiced, but the fish was a step up, and I felt compelled to use my knife to scrape off the last bits of seasoning from the skin after all of the real food was gone.

The lamb, which was perfectly fatty and prepared so that it nearly melted in my mouth, was bar none the best I have ever consumed. The plantains, while not the main event of the evening, could not be ignored. Earthy, fried crisp, and served over a pool of slightly spicy sauce without being drowned in it, to characterize it as “solid” would be an understatement.

As good as the food was, I was rather perplexed after waiting for 40 minutes for the waiter to process my debit card after he handed me the check. But just as we all have those spots where we will keep going no matter how many times they give us food poisoning—because they are just that good—I would volunteer to miss a midterm for another shot at Yassa.