Hateful Eight is Paradise City for fans of 70mm 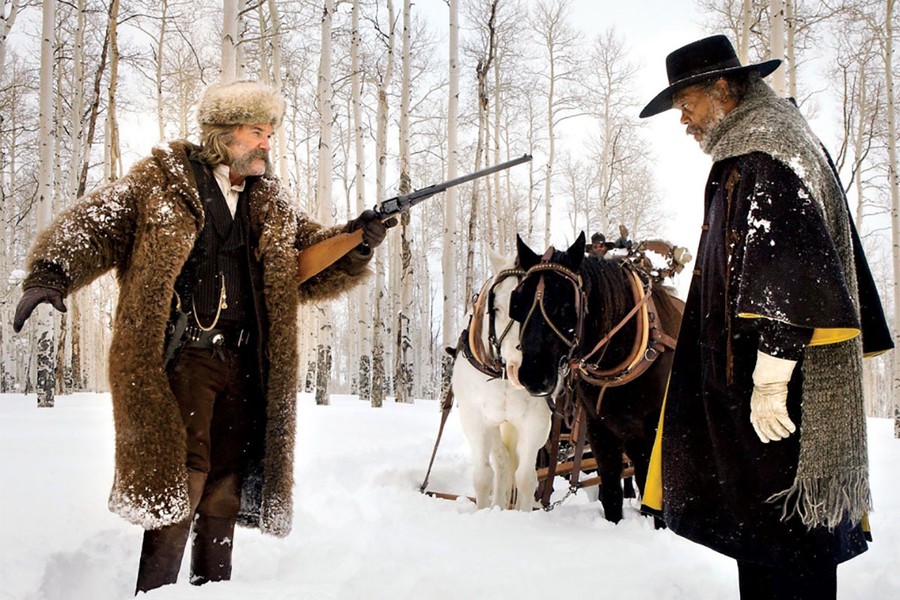 Sitting in the theater waiting for Quentin Tarantino’s latest film, The Hateful Eight, to start, I happened to see a short teaser for Guns N’ Roses’ upcoming reunion tour.  After watching the clip, I came to the realization that Tarantino shares much in common with Guns frontman Axl Rose.  Both enjoyed success early in their careers (Tarantino with Reservoir Dogs and Pulp Fiction, Rose with Appetite for Destruction), were met with widespread acclaim and fandom across the globe, and have personalities that earned them a streak of notoriety.

But Tarantino and Rose differ in how they handled their instant celebrity.  While Rose alienated his bandmates and friends and turned Guns N’ Roses into a parody of itself, Tarantino bolstered himself with a series of original pictures that vary in genre and style.  So even though The Hateful Eight on the surface may appear self-indulgent, with the extravagant promotion of its 70 mm projection, notorious production issues, and high-profile staff (which includes a score from legendary composer Ennio Morricone), Chinese Democracy it is not.  In fact, The Hateful Eight is arguably the most exciting and rigorous movie Tarantino has done since his magnum opus Pulp Fiction.

After getting caught in a blizzard, the group arrives at a cabin known as Minnie’s Haberdashery and meets its gruff Mexican caretaker Bob (Demian Bichir), cunning hangman Oswaldo (Tim Roth), Southern General Smithers (Bruce Dern), and stern cowboy Joe Gage (Michael Madsen).  After encountering all of these peculiar characters, John suspects that one of these men is in cahoots with Daisy and is determined to protect his bounty no matter the cost.

With its claustrophobic setting and eccentric ensemble, The Hateful Eight recalls the starkness of Tarantino’s raw debut Reservoir Dogs. However, The Hateful Eight doesn’t feel redundant and makes much use of its western scenery to expand upon Dogs’ setting.  The snowy plains of Wyoming— actually shot in the Colorado Rockies—adds extra tension to the limited backdrop.

Like Django Unchained, racism is a central theme of The Hateful Eight. Its predecessor dealt with this by satirizing the Blaxploitation genre, rewriting history through its eponymous protagonist’s revenge against slave owners.  In The Hateful Eight, Warren fills Django’s shoes but finds himself at odds with the white men surrounding him. Whereas Django lived out his ultimate revenge fantasy, Warren tolerates oppression during the post-Civil War era, coping with systemic racism and N-bombs.  Jackson has rarely been in as fine form, imbuing Warren with both the spunk and bitterness of Pulp Fiction’s Jules.

The rest of the cast is similarly magnificent, in particular Walton Goggins.  Goggins has long shined on TV in roles in Justified and The Shield and is in top-notch form as Mannix.  He portrays the boisterous and seemingly racist sheriff with nuance, revealing a different side of the character in the second half of the picture.  Goggins’ interactions with Jackson make up many of The Hateful Eight’s best scenes.

However, the selling point of The Hateful Eight is undeniably its cinematography.  Filmed in 65 mm film using the same lens that captured the mighty chariot sequence in Ben Hur, The Hateful Eight is a gorgeous theatrical experience. Robert Richardson’s photography beautifully captured Wyoming’s rugged landscape in a way digital cinematography can’t.  Every detail from the snowflakes to Russell’s muttonchops is elegantly recorded. The crispness of the images made me feel as if I was watching a modern day Sergio Leone movie, further emphasized by longtime Leone collaborator Morricone’s gigantic, Stravinsky-esque score.

Tarantino’s decision to project The Hateful Eight in 70 mm may seem a haughty one, but it displays the picture magnificently.  With the screening’s overture and intermission accompanied by the magnificent array of colors 70 mm provides, I felt as if I was transported back fifty years, when massive epics like Lawrence of Arabia and Ben Hur were released across the U.S. in select theater roadshows.  I cannot imagine digital projection doing The Hateful Eight justice. One can only hope The Hateful Eight will encourage more directors to harness the power of film.

Tarantino has long proven himself to be a giant of modern cinema, and The Hateful Eight stands to be a monument to his legacy. Recently, Tarantino stated that he only wants to make two more pictures before he retires. Before that sad day befalls us, let us hope that those movies will be as good as this one.