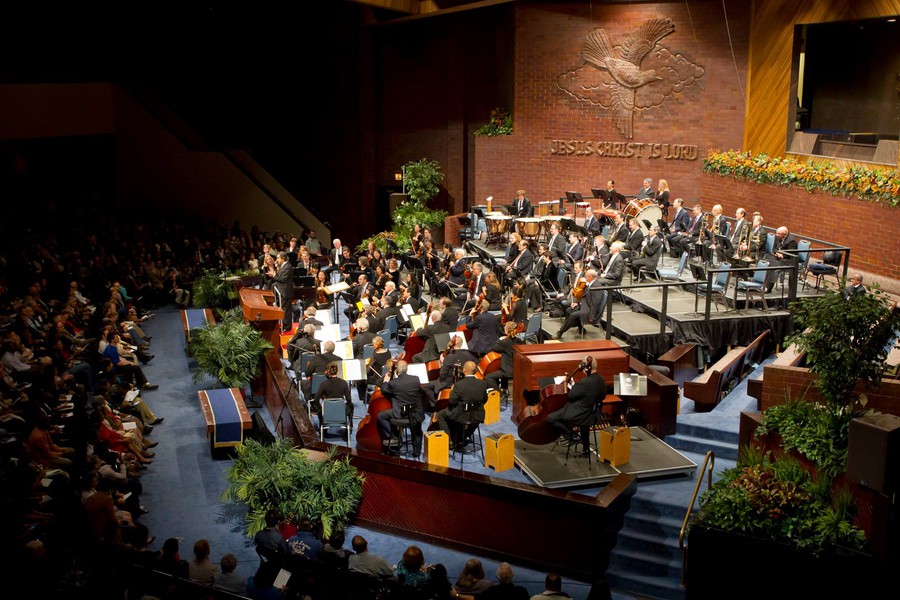 The CSO performed its annual free concert to an enthusiastically vocal crowd.

Last Wednesday, the Chicago Symphony Orchestra (CSO) performed an all-Beethoven program at the Apostolic Church of God for free, drawing a near-capacity crowd of more than 3,000 people.

The concert was part of the CSO’s tradition of performing a free concert at the beginning of every season that began when Riccardo Muti secured his tenure as music director in 2010.

It was the second time the CSO had performed at the Apostolic Church of God for free, the last time being five years ago back in 2011. That concert featured a solo appearance by then-Principal Flute Mathieu Dufour as well as a performance of Tchaikovsky’s Fifth Symphony.

Last week’s program harked back to the 2011 performance, as the CSO delivered Beethoven’s Leonore Overture No. 3—also featuring a flute solo, this time performed by the CSO’s new Principal Flute Stefán Ragnar Höskuldsson—alongside the instantly-recognizable Symphony No. 5 in C Minor.

Before the program officially began, however, the CSO first played “Lift Every Voice and Sing” (also known as the “Black American National Anthem”) accompanied by a group of choristers. It was fitting that Muti begin the night with that piece, as most of the attendees, and indeed the members of the church, are African American. The audience rose to their feet during the piece as they would again throughout the evening, after the Leonore Overture, and certainly after the Fifth.

The CSO’s performance of Beethoven’s Fifth at the Church was particularly memorable—not only because of the sheer dramatic gusto of the piece, the powerful dynamic contrasts, or the brilliant transition to C major—but also because eight notes into the piece, the musicians were forced to stop.

As soon as the audience heard the iconic dun-dun-dun dun, they began to clap. Muti, knowing that there was no way the delicate piano string phrase about to follow could be heard amidst such applause, paused and turned to face the audience with his hands on his hips. The crowd erupted in laughter.

“This is a very difficult beginning,” he said, before jokingly asking the audience whether they were dissatisfied with how the ensemble had played it. “You are forcing me to try again!”

And so the Orchestra started the Fifth Symphony again, beginning in minor with its memorable eight notes and concluding in major with thunderous accented notes.

Muti’s selection for the night was particularly fitting, not only for the music choices that corresponded to the 2011 performance, but also the sentiment. Back then, Muti promised to come back and also expressed a desire to see the audience, most of whom are based in the South Side, at the Symphony Center. On Wednesday night, he addressed the audience with a similar message.

“I will be very happy, and my musicians too, to see you in our concert hall,” Muti said, remarking that the CSO—although glad to give a free performance in the church—would love if the community they reached out to had the same opportunities to access them.

“Come to our rehearsals,” Muti said earnestly, before ending with characteristic humor: “to understand the sacrifices musicians make having to listen to the nonsense of the conductor.”

Muti’s words to the crowd—“let’s make us a big family”—truly reflect the CSO's intention to be a part of the wider community. The CSO’s relationship with the Apostolic Church extends back 16 years, when Isabelle Brazier, the Church’s Fine Arts Guild director, wanted to start an orchestra. She coordinated with musicians from the CSO to arrange string lessons for young churchgoers on Saturday mornings. Now, more than 100 students play in their orchestra. In his concluding speech, Muti also spoke about how he has collaborated in the past with great black singers, whom he named among “heroes” in the field of music.

Wednesday’s concert was a special one, not only because it was free, but also because it placed a strong emphasis on brotherhood—the “fraternité” of the liberté, égalité, fraternité values that Beethoven’s Fifth Symphony champions. The concert was about more than just bringing music to the public; it was about bringing the major cultural institutions of Chicago to the South Side, uniting music lovers despite divisions and differences.

“We make music; we don’t entertain,” Muti said, when describing how the CSO sometimes plays for so-called “sophisticated” audiences who attend concerts out of self-interest rather than genuine interest in music.

“[When] we play for you, we play better,” Muti told the crowd seated before him. “You make us better.”

The audience was one that clapped between movements and had the CSO redo a strong opening of a victorious symphony, but who cares about concert etiquette. The church was filled with sound, applause, and—most importantly of all—people of all ages who loved what they heard. One could certainly feel a special community being built that night, like the growing crescendo that delivers the final, triumphant notes of Beethoven’s Fifth.

The CSO’s All-Access Chamber Music Series will continue to offer free concerts throughout its current season in various locations.

Soloist Emanuel Ax showcased a nuanced Beethoven Piano Concerto no. 1, a conventional work that proves anything but.