Except the Things I'd Change: Second City Reflects 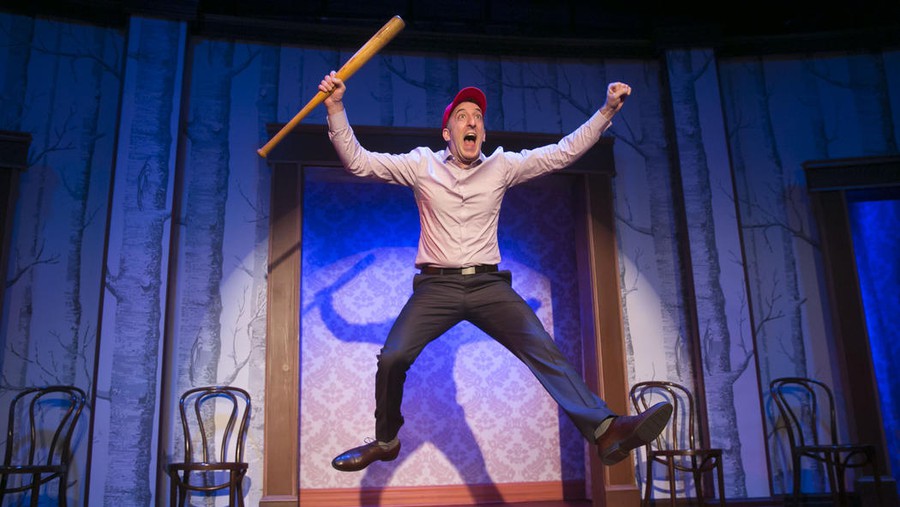 How absurd would the War on Terror, the widespread use of electronic mail, and the grotesquely successful presidential bid of Donald Trump—defining moments of the 21st century thus far—look to someone from the fuzzy vantage point of 1990?

The sketch comedy show, directed by Ryan Bernier and starring co-writers Chelsea Devantez, Paul Jurewicz, Rashawn Nadine Scott, Sarah Shook, Daniel Strauss, and Jamison Webb, begins with an innocuous corniness: Webb, an office worker in 1990, expresses bafflement as his colleagues dismiss what we now know to be the future, laughing off the possibility that The Simpsons will last another season (let alone 26 years), or that Nirvana will get big, or that Jazzercise, alongside the War in Iraq, will become a thing (I confess to having viewed this with skepticism before its purpose became apparent; Webb’s over-acted confusion is at the heart of the skit’s humor). Eventually, Webb does catch on. Spoofs of time-travel clichés serve as a cue to the audience that the rest of Act I will attempt, in a loose way, to summarize 2016 in all of its dark and varied glory.

Though the act proceeds with a hilarious riff on fighting mothers- and daughters-in-law based on a word suggested by the audience (it was “marzipan” the night I went), it would be misleading to characterize the show as improv. Most of what followed were pre-written and reliably funny, if not necessarily cohesive, sketches, including lengthy scenes about overly dramatic driver’s ed instructors and a Black Heaven whose god is Prince, interspersed with pithy interludes referencing Colin Kaepernick and bathroom bills and, yes, Trump. In fact, it’s easy to see how Second City is a feeder for Saturday Night Live, as the performance seamlessly shifts from random silliness to politically charged topicality.

The second act has a similar opening in 1990, in which The Simpsons, Nirvana, Gulf War jokes, etc., are reiterated, calling to mind the déjà vu of the show’s title. The rest of the act balances itself between the trappings of déjà vu, where Act I scenes are rehashed with different actors playing similar roles and fresh skits. Highlights include a self-deprecating moment when a drama school graduate confesses to having “majored in Pretend,” a badly characterized sports fan who grunts and curses as his favorite team loses, and, true to reputation, a full-fledged, audience-prompted improv scene. One of the great strengths of the Second City troupe is how it exploits its own moments of ignorance for maximum comic potential: It isn’t necessary to know anything about sports to see the ridiculousness of a die-hard fan watching his favorite team repeatedly lose and weeping, “But. . . my identity!”, nor must one have an ophthalmology degree to chuckle as a pretend eye doctor struggles to ask his patient, “So. . . does your cornea hurt?”

What Fool Me Twice, Déjà Vu lacked in cohesion, it made up for in sheer comic force.  After all, the well-placed one-liner may play as substantial a role in sketch comedy as the plot arc does in drama, and this show is chock-full of them. It’s not a ruthless, take-no-prisoners brand of satire (well, few prisoners to the left of center, anyway), but it’s got more chutzpah than most.  My endorsement may not be an altogether ringing one, but if you’re looking for laugh-out-loud comedy that tackles head-on the frustration most of us feel about our current political-cultural situation, I can’t recommend it highly enough. In the spirit of Fool Me Twice’s musical coda:

Except the things I’d change.

Fool Me Twice, Déjà Vu will be running at Second City through April. $15 with UCID.

It's run may be over, but this is a show worth fighting to bring back