Regular Season Ends in Tie for No. 1 Maroons 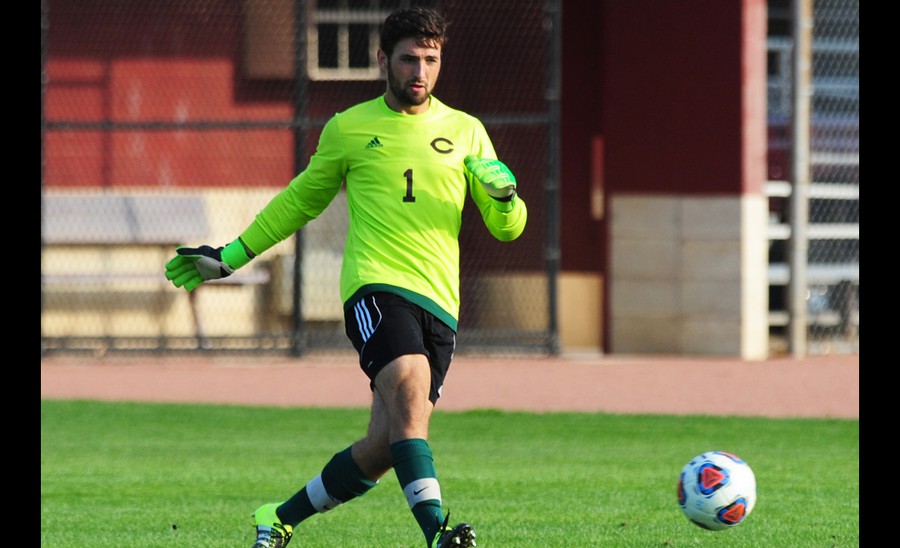 Third-year goalkeeper Hill Bonin passes a ball to his defenders

The South Siders tied Wash U 0–0 this Saturday in St. Louis to finish the regular season undefeated. They managed the draw despite playing almost half of the game with only 10 players.

The No. 1 Maroons already clinched the UAA conference championship and a berth to the NCAA DIII National Tournament last weekend. They will play either Dubuque or Westminster College in the second round on Sunday at Stagg Field after a first-round bye.

The Bears, on the other hand, were competing for an at-large bid on Saturday, but first-year defender Sam Drablos does not think this difference in motivation impacted the game.

“I think we definitely went into that game treating it as a game that we should win,” Drablos said, who has started in 14 games this season. “They played a little bit harder than they normally did but I don’t think the fact that we had already secured a spot made us play any different.”

The Maroons controlled the first half of play and outshot their opponents 7–2. They nearly broke through in the 21st minute when second-year forward Matthew Koh beat the keeper but was denied by an outstanding team effort on the part of the Wash U defenders.

The momentum shifted in Wash U’s favor when fourth-year forward Brenton Desai was sent off in the 61st minute, but the South Siders managed to keep the game scoreless and escaped with a draw.

“Putting us down to 10 men made it really difficult in terms of being able to attack, but the fact that we were able to keep out a goal while down a man really showed us as a team how mature we are,” Drablos said.

The red card was Desai’s second of the year, which means he would normally face a two-game suspension that would sideline him until the Elite Eight. However, the Maroons feel the red card was unwarranted and will be challenging the suspension.

“My coach and the Wash U coach both agreed that it wasn’t a red card offense, and my first red card was not a red card offense either, so my coach filed a formal protest with the NCAA to hopefully get that overturned so that I can play,” Desai said. He is second on the team in scoring with nine goals. “If I’m not able to play then I’ll just have to be cheering from the sidelines and hope that we can win.”

The draw means that Chicago finishes the regular season undefeated for the first time in program history, but the Maroons tied two of their last three games and only scored two goals in that stretch. Despite this stuttering end to the season, Desai remains confident the team will perform in the tournament.

“We just have been a little bit off with our attack, but I don’t think it’s anything to worry about,” he said. “Some people have been off, which happens. It’s not a big deal. I think we’ll be back on track for the postseason.”

Due to their standout play and No. 1 ranking, the squad heads into the postseason with a bye and home field advantage. The Maroons will begin their postseason campaign this Sunday.