The sorority initiated 8 new sisters, including the first first-year member in the history of the national organization. 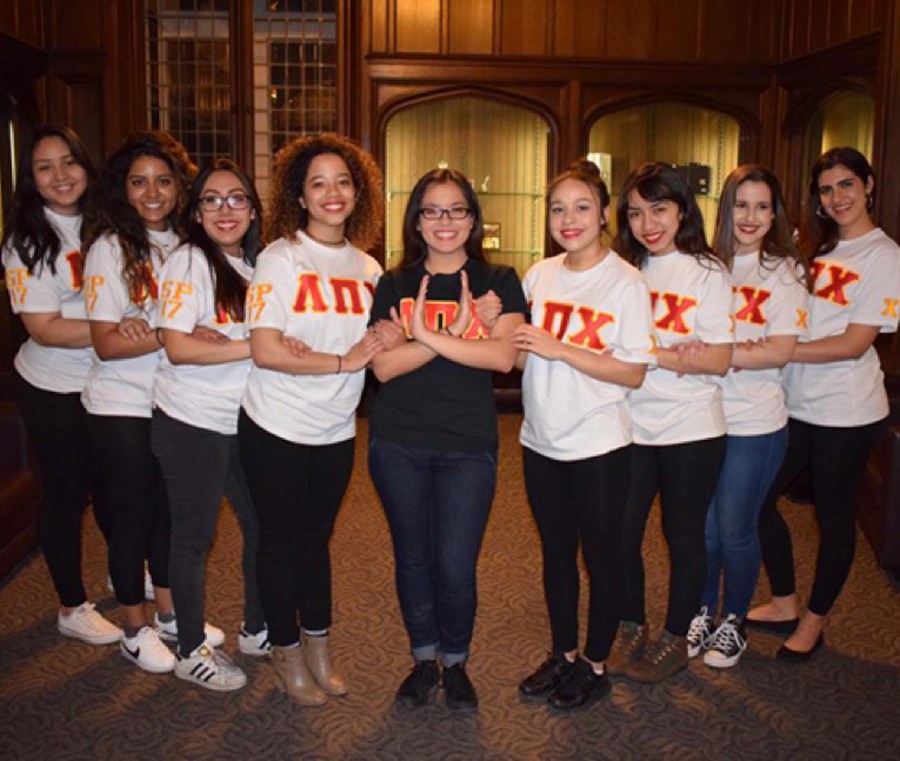 The 2017 intake class of the Chi Chapter of Lambda Pi Chi Sorority, Inc

The Chi Chapter of Latinas Promoviendo Comunidad/Lambda Pi Chi Sorority, Inc. has made a resurgence on campus with the initiation of eight new sisters last week, the largest intake class in the history of the chapter.

Before the initiation of the new sisters, Lambda Pi Chi’s continued presence on campus was at risk. Chapter president Marielena Segovia was the only undergraduate sister of the sorority at the University for one and a half years until the initiation of this intake class.

“I think for us and for our organization as a whole, it’s always been quality over quantity. While we do strive to have as many women as possible, our numbers have usually been on the smaller side, mainly due to us being a multicultural Greek organization at a predominantly white institution, the rigor of our process, and the seriousness of a lifetime commitment,” Segovia said.

Second-year Ayling Dominguez said she did not think a Greek organization was right for her when she arrived on campus.

“Before arriving to college, I, as many others do, had a solid view and opinion on Greek life, and kind of resigned to never joining a sorority on campus because I didn’t want to be associated with constant partying, drama, and whatever other preconceptions of Greek life I held. I had no idea that multicultural Greek life existed and was an option…being [at] a predominantly white institution really made me miss being able to celebrate and share my cultura latina, so the thought of a Latina Greek-lettered organization was really appealing to me,” Dominguez said.

According to Dominguez, her decision to join Lambda Pi Chi changed her perception of what a Greek organization can be.

“Once I started to get involved, I discovered just how different and unique Lambda Pi Chi was from other organizations. The process of joining itself is very different [compared to other sororities]…. At first I was slightly apprehensive by the process and questioned whether I really wanted to go through with all of this, but as soon as the process began, I started getting really close with all of the wonderful women interested and involved,” Dominguez said.

Jasmin Jimenez is the first first-year sister in the history of the sorority, not only for the chapter on campus, but for the national organization at large as well. Jimenez also noted that the process to join the sorority was not easy.

“There were other first-years that showed interest but ended up dropping, and to be completely honest, there were times when I considered dropping, too…I'm still not used to life on this campus, but having seven other women, some second-years and some third-years, made it easier to navigate life at UChicago, and the support is something that I still appreciate,” Jimenez said.

According to Segovia, Lambda Pi Chi plans to continue collaborating with the Organization of Latin American Students (OLAS) and the Center for Identity and Inclusion, but it also looks forward to working with the Organization of Black Students (OBS), Movimiento Estudiantil Chicanx de Aztlan (MEChA), and other Greek organizations on campus. It also plans to bring the sorority’s two national philanthropies to campus.

Project L.E.A.A.P (Latinas Educating on AIDS Awareness and Prevention) and Proyecto H.A.C.E.R (Hermanas Advancing Career and Educational Resources) will likely include “workshops about how HIV/AIDS disproportionately affects the Latinx community…and holding fundraisers to give back to local food banks or hosting professional development workshops,” Segovia said.