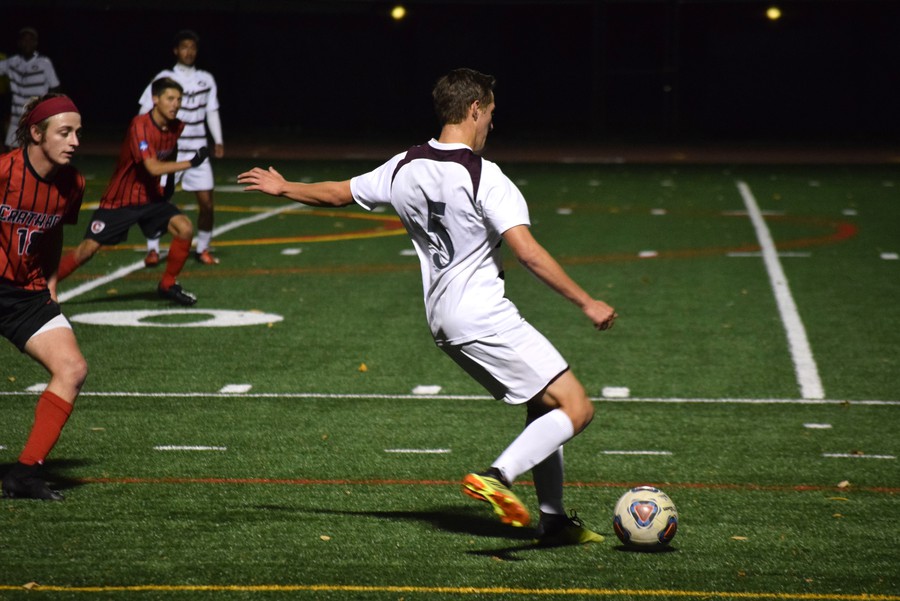 Second-year Isaiah Holquist looks to pass to a teammate.

This past Wednesday and Thursday, both the University of Chicago men’s and women’s soccer teams returned to action for their first home games since September 29, facing off against Carthage College and the Illinois Institute of Technology respectively. These non-conference bouts ended with the men’s team (12–2–1) suffering their second consecutive defeat by one goal, and the women’s team (13–1–1) winning their sixth straight game.

The University of Chicago women’s soccer team dictated the action from the start, not only in being the aggressors, but also in maintaining pressure. The Scarlet Hawks were not allowed to move the ball past their half, as they had little to no time to possess the ball and were soon forced to get rid of it by any means necessary. This allowed the Maroons to intercept balls that would eventually lead to shots on goal. In a first half where the Maroons took complete control, both sides remained scoreless. The closest opportunity was a free kick in the seventh minute taken by first-year Nicole Kaspi from 30 yards out that hit the post.

While the Scarlet Hawks did well on defending the nonstop Maroon attack, it didn’t bode well for them; in the second half, the attack from the Maroons became even more precise and aggressive. Off a 40-yard free kick, third-year Mackenzie Peebles launched the ball into the box where third-year Hanna Watkins headed it forward, allowing fourth-year Jenna McKinney to open the scoring in the 61st minute. Four minutes later, Hanna Watkins scored a header off a corner kick taken by first-year Tabitha Bishop. The Maroons weren’t satisfied with just a 2–0 lead, and in the 69th minute, McKinney set up a pass that allowed second-year Maddie DeVoe to break through past the defense and sink the ball into the net. With not much the Scarlet Hawks could do, the dagger came at the hands of third-year Adrianna Vera, who shot a corner kick that struck the post and then went directly to first-year Nicole Willing, who gave the Maroons a 4–0 victory.

The University of Chicago men’s soccer team engaged in a physical match, which had a total of 28 fouls and five yellow cards combined from both sides. Both teams moved the ball back and forth at a fast pace, setting up shot attempts that were saved by the two goalkeepers. The UChicago defense played a key role in clearing out a menacing play by Carthage in the 38th minute that almost resulted in a goal. Ultimately, both teams were unable to find the inside of the net. Fourth-year Max Lopez managed to score a header, but it was ruled offside.

As the second half rolled on, the Maroons were relentless on the attack, with shots taken by second-years Carter Romero and Scott Lich being saved. It’s said that the team who doesn’t end up scoring will be scored on; the Maroons fell victim to this. In the 66th minute, when a Carthage corner was cleared from the box, the ball found its way to an open player 25 yards out who chested it and then launched it into the net, giving the Red Men a 1–0 victory. The Maroons’ momentum and opportunities fell short due to controversial offside calls from the referee and the Carthage defense that prevented any shots taken from being in the goal in the final minutes.

When asked about what he attributed to this loss, fourth-year Zachary Pierce said, “I would definitely attribute Wednesday’s loss to a number of things. I think we could have been much sharper in the final third, but we were on the receiving end of some tight offside calls. This past weekend without any games gave the team an opportunity to relax and recover. This week at practice we’ll look to focus on some specifics on both sides of the ball heading into the weekend’s doubleheader.”

The Maroons return to action on Friday, October 26, when the women’s and men’s soccer teams will take on New York University at 3 p.m. and 5:30 p.m. respectively.