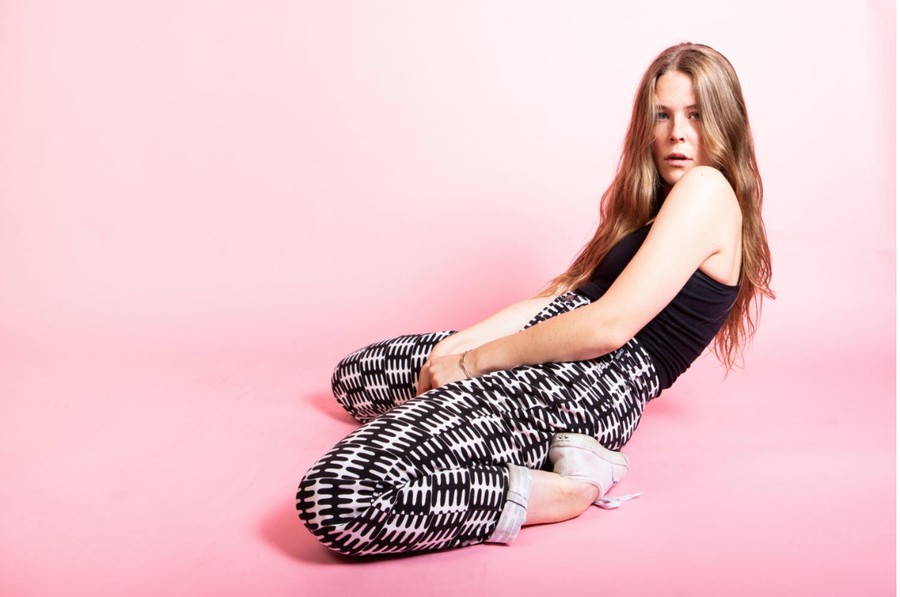 Maggie Rogers is on the rise, playing to a sold-out crowd at the Riviera last Tuesday.

Someone passed Maggie Rogers a sparkling blue cowboy hat as she danced and darted across the stage at the Riviera this past Tuesday. The hat only amplified her vivacious stage-presence—embodied in her signature dances on full display during the final song of the show: “Alaska.” The audience was clearly awaiting the hit track in high anticipation. “We’re playing ‘Alaska’—of course we’re playing ‘Alaska’!”  Rogers said before a faithful rendition of her cool stream and tall mountain–inspired ballad. She concluded her performance gracefully: bowing low and removing her hat in one sweeping motion, a wonderfully spontaneous moment. But, then again, that was a theme for the night. The perfection in Maggie Rogers’s live performance stems not just from practice, but seemingly from some creative hot spring under the Alaskan coolness of her persona.

It’s a rare talent that commands the attention of an audience as Rogers did. When she first appeared onstage after her opener’s heavily electronic set—from Australia’s “most expensive rapper,” Mallrat—she gasped at the sight of the sold-out Riviera. She had just finished her single “Give A Little” when she stopped dead in front of the mic: “This is the biggest show we’ve ever played…” she said before trailing off in awe. It was obvious the 23-year-old Maryland bluegrass musician–turned–pop icon was not quite aware of her reach.

This is the magic of Maggie Rogers. She has achieved fame based not on heavily produced beats and a repertoire of formulaic songs. She achieved popularity through her genuineness. Producer Pharrell Williams felt it (he cried), and so do all of her admirers. Based heavily on cathartic experiences with nature with audio bits from her various wilderness travels to Alaska and the Pacific Northwest, her music is a unique synthesis of folky rasp and pop electronica. She makes every listener feel that they knew her personally, an intimacy that means that every step toward fame for Rogers brings both excitement and the loss of a special secret.

While her 2017 EP Now That the Light Is Fading is her only release, she has been dropping singles from her upcoming album Heard It in a Past Life. But on Tuesday she gave more to Chicago. “I’m sick of waiting for my record to come out, so we’re just going to play the entire thing,” Rogers said before starting into the melodically folky “Burning,” a new song featuring fiery synths and glowing harmonies.

Throughout, it was clear that Maggie Rogers isn’t here for the fame. Her goal was to replace the prevalent power dynamic between artist and fan with rapport and to bring each audience member into her life by telling stories.

“Overnight” addresses the stress of fame while “The Knife,” the broodiest song on the new LP, describes the shared experiences of drinking with friends. The previously released “Light On” contemplates the break from fame that performance provides, while “Back in My Body” is a reminder of her humanity. Thus, Rogers made it clear on Tuesday that she is indeed human, not some robot produced by the pop industry.

Her energy was infectious. “After ending a show, I have a lot of adrenaline!” she confided in front of her amped audience. “But, I feel that the best shows are those where we come down together,” Rogers continued. With that, she sang, unaccompanied, the opener from her 2016 EP, “Color Song.” The simple yet memorable melody, sounding similar to a clip off a Lomax recording, reverberated throughout the theatre. Her entire audience stood captivated not by her vocal technique so much as the raw emotion she brought to every word.

Before Rogers’s triumphant, cowboy hat–enthused goodbye, her folk roots shined with a cover of John Prine’s ageless “Angels from Montgomery.” The bright and bubbling synths, pop harmonies and drum kit gave a new, modern meaning to Prine’s anthem. And it aided in hammering home an undeniable fact about Rogers’s moment in music: Propelled by her recent performance on Saturday Night Live and proven by her enthusiasm for and command of music, Maggie Rogers has arrived.